March 2, 2020, 4:51 PM · To have Christian Tetzlaff listen to your playing is to have a very attentive listener indeed.

While he was in town to perform with the Los Angeles Chamber Orchestra in early February, Tetzlaff gave several masterclasses on his day off -- one at The Colburn School and another that evening at the University of Southern California's Thornton School, which I attended.

Throughout the masterclass, Tetzlaff emphasized a deep kind of interpretation: the idea of finding expressive and physical logic in the music, and using technique to bring that out. While he spoke in a gentle and steady voice, he was rather relentless in demanding more energy, focus and risk-taking from each violinist. He encouraged them with the occasional gesture and demonstration, and his focus on each player (including piano collaborators) never seemed to flag.

The evening began with a performance by violinist Alex Petrin and pianist Isaac Friedhoff of the Violin Sonata No. 10 in G major by Beethoven.

Tetzlaff's first observation was that he wanted to rearrange where Petrin was standing, which, looking at the stage, was slightly to the right of the pianist (pretty customary around here, to be honest!). Tetzlaff felt this arrangement put the violinist sort of "in front" of the pianist, giving off the message that the violinist plays, the pianist follows. Instead, Tetzlaff brought Petrin to the left, where violinist could see pianist.

"I would like you to be with your buddy, making music," Tetzlaff said. 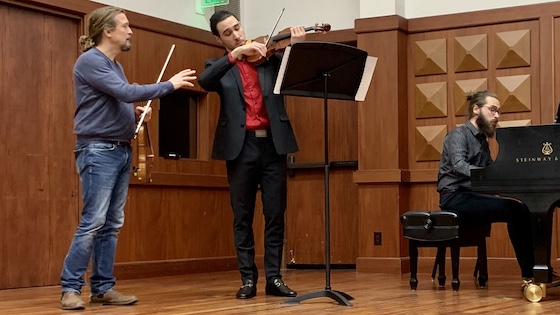 Next Tetzlaff talked about ways to interpret markings in the music, not just as crescendos or dynamics, but as relatable human feelings.

For example, strictly following the many hairpins in the music -- crescendo/de-crescendo markings -- won't necessarily equate to good expression, unless one considers Beethoven's meaning behind those markings.

"It's not 'louder,' but more excited," Tetzlaff said, "like somebody who is so excited he isn't quite talking right."

One can compare playing music to speaking words; "all our words have a shape," Tetzlaff said.

There are a number of places where the instruments have exuberant exchanges - Tetzlaff warned that these should not sound too busy, otherwise, "it sounds a bit like work," Tetzlaff said. Beethoven is enjoying a simple play with dynamics - a loud outburst and its softer response. It should sound happy and playful -- not like serious work.

Toward the middle of the movement is a sort of improvisatory and slow exchange - parts of this should sound like "a waltz slow motion -- not a funeral march." He went back to the concept behind hairpins -- "it should not be hyper-ventilating, but very expressive. The tempo is slow, but you can play with it."

Tetzlaff walked around both musicians; stood between them; directed one, then the other, then both of them. Very often he stood still, but then he would channel the music, letting it out with a motion or a gesture, or a hand held down low to keep a quiet section more quiet. ("It's a very healthy piano you guys have here," he observed.)

Many musicians can relate to what Tetzlaff observed about her performance: "When it gets difficult, you reduce your willingness to make a mistake, and it does not make it easier."

One must risk making mistakes, otherwise "it's like a rabbit in front of a snake."

Again, he felt things were too serious. "You should tell us stories," he said. 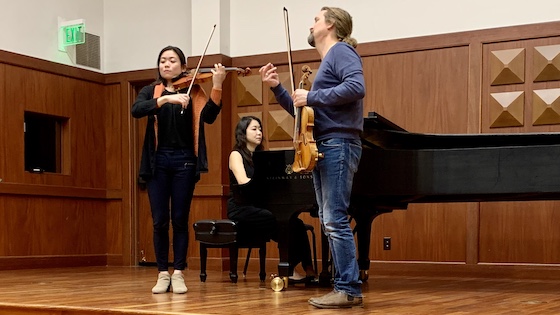 For example, toward beginning of the concerto (the third entrance for the soloist), the violin calls out to the audience, twice: "Here I am!" Tetzlaff demonstrated, playing the beginning emphatically, like an arrival.

If you call out to someone, do you sustain your call? Or is there a release? (It's written as a half-note - but often played longer.) Without some release, Tetzlaff said, it does not seem like physical human gesture that one would find in the natural world.

He also encouraged her to "join in the dancing" when the music calls for it, "allow the physical joy to come through."

Tetzlaff allowed each student to play for long stretches at a time, sometimes listening attentively in stillness, and other times actively directing: dancing around a bit and waving his arms in large gestures.

He got Lo to toss aside some of the caution she was showing in the beginning and really go for the motion in the music.

Christian Vayman started with the first movement, "L'Aurore," a musical depiction of dawn, emerging light and sunrise. Vayman had a good sense of flow and feeling for this music.

They worked a little bit on the opening - "I think it's meant to be sounds from nature, something that happens in a natural way," Tetzlaff said. "Try to make it one gesture." 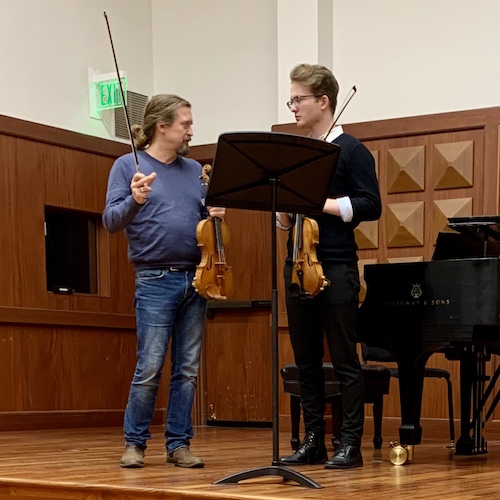 The beginning of this movement has some rhythmic freedom, but Tetzlaff wanted him still to think about how to make sense of the timing, to give it a kind of natural, physical logic. Vayman has a strong sense of that flow, and Tetzlaff simply listened him play for a long stretch, without comment. Toward the end of the movement, as the music grows in range and volume, Tetzlaff asked Vayman to "give a bigger feeling" to the chords. The music actually says, "sempre più forte" and then "FFF" - a lot to ask for one violin with no accompaniment. "What can you do, to make it that?" Tetzlaff asked.

Tetzlaff had a good suggestion: to create a more orchestral effect, emphasize the bottom of the chords, which at that point are all rolling quadruple stops. This worked impressively.

Tetzlaff worked on the same idea even more extensively with Tiffany Chung, who played the "Danse Rustique" from the same sonata. In a passage of quadruple-stop chords, he asked her to use "all the hair on the bow" and focus on the bottom of the chords. That increased the volume quite a lot. 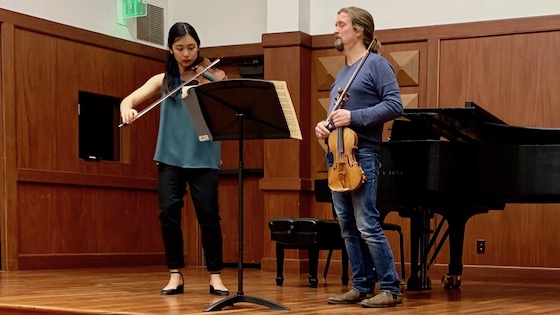 He also wanted her to feel more of the dance element in the music - although this dance is in the uneven meter of five.

"Five-eight is not something so common in our culture, so you have to dance it for us more pronouncedly," Tetzlaff said.

As he did throughout the master class, Tetzlaff emphasized the idea of finding exuberance and feeling in the music over following a purely technical map. At one point he asked Chung, "What is missing here?"

"The speed?" she guessed.

March 3, 2020 at 08:33 PM · Thank you for this report. I was especially taken by the advice to take risks. I have always liked violinists who take risks (Kremer for example).

March 5, 2020 at 10:01 PM · Okay I have checked my Barenreiter, and the passage is toward the end, measure 270-271. I agree, it must be 2-4-4-4 (rather than 4-4-4-4 that I originally wrote), and the fingering is indeed written in, in this urtext edition, which would imply it was also in the original (whether Beethoven himself would have written that, or perhaps the violinist with whom he was working - that is an interesting question!). I may have mis-heard, but it is still rather interesting to do 4-4-4! I'm going to correct it in the story because the more likely scenario is that I mis-heard too many 4's, I'm sure Tetzlaff is very familiar with the urtext!