February 28, 2020, 10:39 AM · Cremona, Italy, the city where Antonio Stradivari once made his famous violins and still a major center of violin-making, has seen major shut-downs as a result of the spread of coronavirus. Violin case maker and longtime Violinist.com member Dimitri Musafia gave us this report today from Cremona: 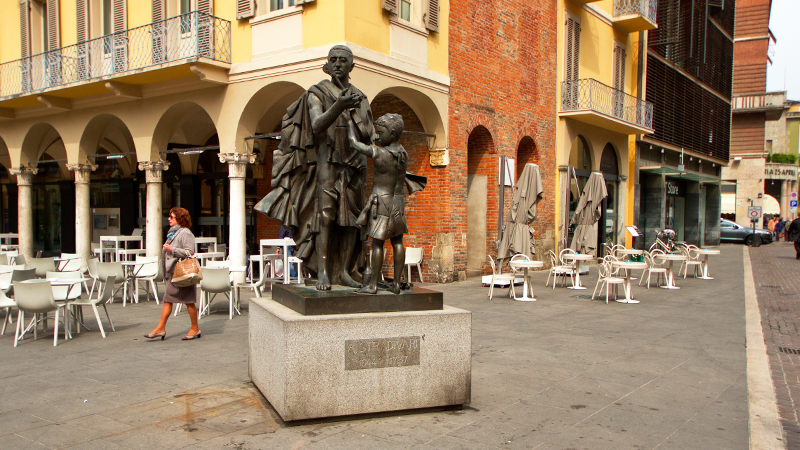 "Cremona is in the 'yellow zone,' meaning it is confines with the 'red zone,' which is under lockdown. Lockdown means no one can enter or leave the towns within that area, which includes Codogno (from where the virus started spreading), Casalpusterlengo, and other small centers. The army is presiding over all access roads. There have been 91 cases of coronavirus infections in the province of Cremona (which includes part of the 'red zone') and so far nine deaths."

"Inside the 'yellow zone,' places such as theaters, movie houses, concert halls, and museums are closed; bars and cafés, until yesterday, had to close at 6 p.m. The idea was to limit public gathering, which would favor further diffusion of the virus, although supermarkets had to remain open (so people could buy food) and other shops could remain open too (so the whole economy did not grind to a halt). Restaurants likewise remain open (although some have chosen to close anyway). All Chinese-run restaurants, hair stylists and bars (there are perhaps three dozen such activities in Cremona) all closed simultaneously and until further notice. "

Musafia said that there have been nine deaths in the province of 360,000, representing 0.0025% of the population. The average age of the patients was 78, and all of them already had severe ailments, two of which were cancer. By all appearance, the virus pushed these already-sick patients past the tipping point.

"Violin-making activities are going on as usual, the only exception being that clients aren’t coming to Cremona for purchases or restorations: hotel reservations are reportedly down 95 percent," Musafia said. "Also the major trade fairs which interest Cremona violin makers are being cancelled or postponed, which equates in lost business opportunities."

Here is another article about the situation, though it is in Italian!

February 29, 2020 at 01:14 AM · The place to watch is South Korea. A largely heterogeneous, prosperous, and well-educated country that has only one easily-closed border. If they can't keep a lid on the spread of the virus, it will be entirely hopeless for America. We have no hope of handling this any better than the Italians.

February 29, 2020 at 01:16 AM · What this means is that a dozen fewer violins will be made this year in Cremona. Compared to a hundred thousand fewer in China.

February 29, 2020 at 07:09 AM · Interesting that the Chinese-run businesses closed, presumably voluntarily .

Here in Melbourne it seems to be an excuse for Xenophobia/racism, as a lot of Chinese restaurants have had to close due to lack of business, and some cafes have had customers leave if they found out they had Chinese staff.

February 29, 2020 at 07:22 AM · Here in Japan Prime Minister Abe asked each prefecture to shut down the schools a few weeks earlier than normal for Spring vacation. My daughter is glad, she can stay home and play the piano all day. Face masks are sold out in most stores. There is another item that sells out every time there is some sort of calamity, toilet paper. The shelves are empty. I guess the anxiety causes some kind of intestinal disturbance.

February 29, 2020 at 05:17 PM · In UK we are told to self-isolate to monitor ourselves, if any of us have recently returned from places like South Korea, China, Iran, Italy, Japan, even if we don't have any symptoms. During the time, we call our GP and get advised or arrange test if there is any symptom.

Of course, the initial self-isolation is all done voluntarily. It is hard to think for those people who are self-employed, or on zero hour contract to just stop showing up to work and self-isolate for sustain period of time. Then, there are those who share living space with their friends, spouses and children. There may not be a space for those to isolate without kicking the everyone else out of the apartment.

I think it is inevitable that the virus will spread.