Violin Masterclass with Midori at USC

February 19, 2020, 3:04 PM · One might be drawn to a masterclass by Midori because of her star power as a soloist who has played internationally for three decades and still performs more than 100 concerts a year.

But after seeing several of her masterclasses before, I'm more interested in what she has to say as a teacher. After all, she currently teaches at the Curtis Institute, and she taught at the University of Southern California's Thornton School for 14 years (eight of those as head of the strings department). She also teaches as a guest professor at Japan's Soai University, the New England Conservatory and the Shanghai and Beijing Conservatories, and she just finished a year-long position at Oxford University.

So it was with great pleasure I attended her violin master class at USC Thornton in late January. The masterclass featured three students playing works by Beethoven, Prokofiev and Ysaÿe; and Midori provided plenty of food for thought for the standing-room-only crowd of students, players and teachers who came to watch. 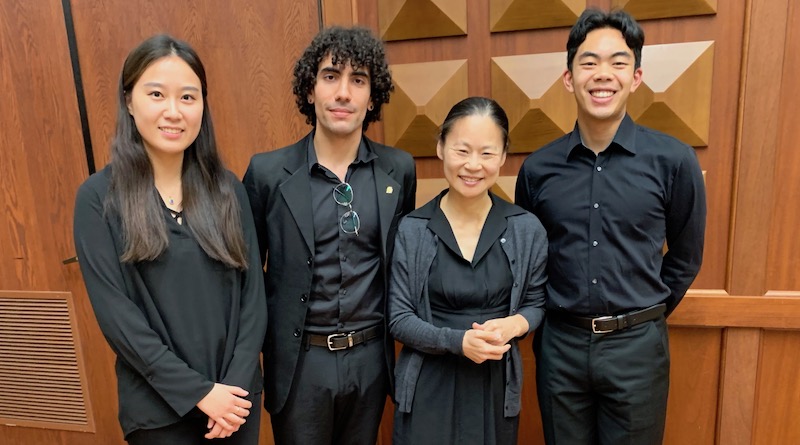 Midori first worked with violinist Yaxin Tan and pianist You Zhao, who performed Beethoven's Sonata for Piano and Violin, Op. 12 No. 1 -- a piece which features the piano at least as much as the violin, as Beethoven himself was a master pianist. So it made sense that Midori focused on the interaction between the two instruments as well as interpreting the plethora of compositional details in this piece.

First Midori noted the energetic tempo indicated by Beethoven: "At the end of the day, this is marked 'Allegro con brio.' It's not simply about the tempo, though, it's more about the feeling," Midori said. They way they played it, "it felt a little too relaxed."

"It's something to do with the way you feel the pulse, and a pulse is different from a metronomic beat," she said. While the pulse in this case may require more speed, it also has to do with character. "What is the pulse of 'Allegro con brio'?" The words indicate a fast tempo, joyful, and "with spirit."

"So very crisp, more energy in the pulse," Midori said. 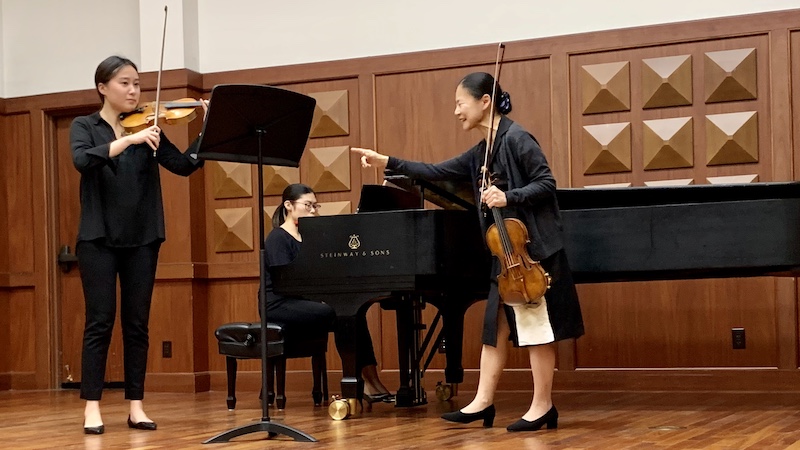 Midori with violinist Yaxin Tan and pianist You Zhao. Photo by Violinist.com.

Yaxin asked if the movement should be felt in two, rather than in four, but Midori said that since it is written in four, it should still be felt in four. She added that the rests are also part of that pulse.

"How do you feel the rests?" Midori said. "It's not just empty space. Do they belong to what came before, or to what comes next? You need to feel the rests, in character, in four."

Midori also advised Yaxin and You to be aware of changes that happen in the music. Sometimes a change is clear, and sometimes it is more of a gradual transition. For example, when does a crescendo start? When are musical ideas shared, and when do they pass from one instrument to the other? "It's all these little details that actually make a difference," Midori said.

She also advised Yaxin to be more percussive in her left hand, to match the clarity of the piano.

When it comes to the relationship between the two instruments, it helps to find where the parts are in alignment and where they have more of a push-pull relationship.

For example, she suggested looking for "vertical points" in the music. "Where do we feel grounded, where do we feel the pull of the beat?" Midori said.

Another thing to ask during any given phrase: "Do you want to be leading the momentum or pulling against the momentum?" Midori said. "What is going on between the instruments? The relationships change. Where do you lead, and where do you follow? It's not as black and white as melody vs. accompaniment."

Very often you need to adhere to an internal sense of the beat and your own sense of the music, because "if you only listen, you will only react," Midori said. That can put you slightly behind the beat. "You have to take care of the inner beats.

In conclusion, "Beethoven is very meticulous about all the details," Midori said. "It's important to know those details and bring them out, rather than just letting things happen."

Next violinist Ayrton Pisco gave a very exciting performance of the third movement from Prokofiev's Violin Concerto No. 2, Op. 63, with pianist Chuyi Liu. The piece is so busy and loud, I noted that I didn't really get sense of his tone on the violin. I also wondered to myself, is it really possible to get the solo violin tone out there, considering the wild nature of this movement?

In a word, yes: Midori focused exactly on this issue. First she asked Ayrton to imagine how the sound of his violin travels. "How do you envision your sound to project? This is what I think of as 'focusing communication.'" She asked him to choose a specific place in the recital room where he wished to project the sound. He suggested the back door, but she wanted something higher up. 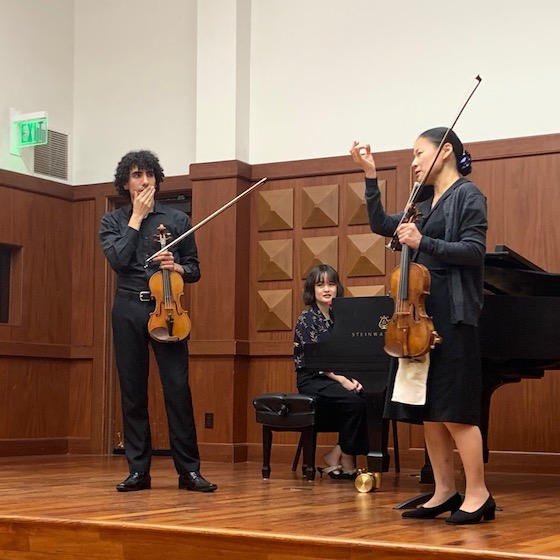 Midori and Ayrton Pisco decide where to focus the sound. Photo by Violinist.com.

Ultimately they chose the portrait, hanging high on the back wall, of a lady in a lovely pink gown -- Jeanette MacDonald, for whom the recital hall was named. Jeanette became a bit of a character in this portion of the master class, as Midori kept pointing to her to remind Ayrton to project.

Creating the sound, she wanted him to imagine not just bowing into the instrument, but reversing those roles, to "meet the pressure of the bow with your violin."

Following these suggestions, Ayrton was already getting much more clarity of sound across.

They worked on a passage that was particularly full of fast notes, all slurred. She said it's easy to be "missing in the middle," that is, to fail to project those notes in the middle of the slur. Part of projecting every single note is imagining how it will sound.

"It's not what you do with your hands, it's what you do with your ears," Midori said. One must have an objective ear, she said, pointing to the portrait, as well as your ear on stage. You have to check your "objective ear" all the time, to see if you are really getting things across. For example, in passage with many fast notes, some of those notes can get lost in the commotion.

"Do you hear every single note you are playing?" Midori asked. "You need to, if you want us to. If you really try, and you still can't hear yourself, then maybe you need to play it in a why where you can hear yourself."

She was referring to a very complex passage, full of awkward string crossings and crazy fast triplets; nonetheless she had him repeat the passage for clarity of every last note, holding him to quite a high standard. In order not to get tangled up in such a passage, "know exactly what your move is going to be," she said.

By the end of their work he was really punching out the notes, and with a lot of clarity even in those very dense and note-y passages.

"Prokofiev is so clear, he evokes a very clear image, a clear scene," Midori said. "When we play, we don't have words, we only have the sounds we make. We have to imagine what it would be like if we did have words.

The evening ended with some solo violin: Bradley Bascon played the "Ballade" from Ysaÿe's Sonata No. 3.

Bradley was working from music on an iPad, which he gave to Midori at the beginning of his performance. The first thing she noted afterwards was that the book version of Ysaÿe's Six Sonatas for Solo Violin contains a table in front that explains the unique symbols that Ysaÿe created and used throughout. It's important to find that table, which might not necessarily be included when downloading music, and to "make sure you are following those symbols."

Midori's interaction with Bradley was so interesting, because she started by talking about vibrato and structure -- all good information. But somewhere in the middle she simply gave him permission to be expressive, and that seemed to be the one thing he needed most. 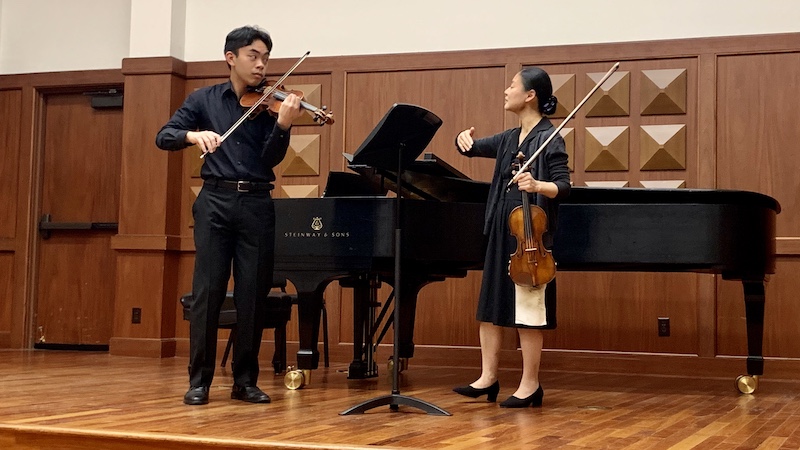 The beginning of the "Ballade" is quite soft, marked "p," but later it gets even softer, down to "pp." So it's important to begin at a dynamic that is quiet, but allows for getting even more quiet. If you start too softly, it won't be possible.

She suggested using an arm vibrato, which uses larger arm muscles, which is helpful during the rather scary and exposed beginning of this piece.

She encouraged him to really bring out these things, to go all-in. "Don't be afraid you are going to do something too much," she said. "You have the ideas, and you are somehow kind of shy about it. Don't be, get it out!

That was a turning point; he really loosened up and played more expressively, and Midori encouraged him to go in this direction with his playing.

"Stay emotionally involved like that," she said. "When we start to worry about what could go wrong, we make it worse and do a disservice to the music. Don't wait for permission to be expressive."

She also encouraged him to imagine the sound, imagine the feeling, imagine the mood. Then use that concept to "hear ahead," to create an expectation for how you will sound.

"You are listening to what you played, but you need to hear ahead, so that the fingers follow what you are hearing," Midori said. "First you have to have a clear image of how you're going to play."

In order to free up his bow arm, she asked him to "imagine that your arm and your bow are a little longer than they are." And in fact, imagine the bow is longer at both ends. This proved a very effective way to get him to use more bow!