February 9, 2020, 7:38 PM · Violinist Christian Tetzlaff seemed to attract a new following everywhere he performed, or taught, or spoke while he was in Los Angeles last week.

When I attended Tetzlaff's violin master class on Thursday at the University of Southern California (more on that in another article), I greeted the person sitting behind me, only to learn that he was a flutist - not a violinist - from the Los Angeles Chamber Orchestra (LACO). Tetzlaff was in town to perform the Beethoven Violin Concerto with LACO, and during the rehearsals the flutist had been so intrigued by the German violinist, "I wanted to hear everything he had to say." The master class was packed with students, teachers and musicians, including LACO concertmaster Margaret Batjer - as well as Los Angeles Philharmonic concertmaster Martin Chalifour and associate concertmaster Bing Wang.

What is this rather unassuming violinist's big draw?

Let me make a comparison: in filmmaking, the best directors are able to "achieve their vision" - literally, to manifest a picture from their mind on film. It would seem that Tetzlaff has this ability in abundance - translated to music. Furthermore, his "vision" is highly detailed, imaginative and defined. And he's reached well out of the conventional box of musical tools to produce it.

When I attended his performance of the Beethoven with LACO on Saturday night, I was anxious to hear whether his performance would match the beautiful concepts he had described in our Violinist.com interview earlier this week. Indeed it did, and more. 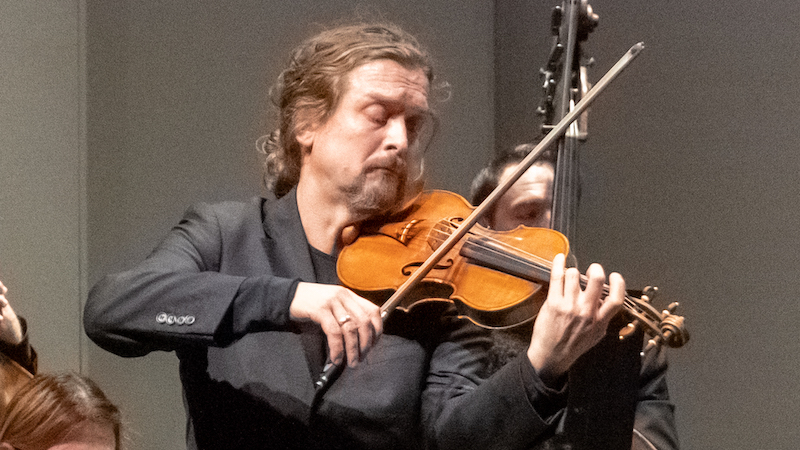 Not only that, but I also had the sense that he'd achieved full buy-in from the musicians of LACO, and not just because they were showing up to his masterclass. On Saturday, under the direction of their new conductor Jaime Martín, the musicians played with conviction and zero hesitation, with a palpable sense of working together. Bored, non-energized musicians, making dour faces? Nowhere here.

From the beginning, before Tetzlaff played, it was clear this was going to be a new take on an old standard. During the long orchestral introduction to the Beethoven, the string sections played with minimal vibrato, almost like classical "period" playing. It was clear they weren't going for a Romanticized version of this piece. Tetzlaff stood still, with no pretension as he awaited his entrance.

When he played, the music came off with movement that felt inevitable. In fact, his magic seems to be related to an ability to make sense of movement through time, to relate it to something.

When Tetzlaff plays, it's all about motion: the motion of the music, of the bow, of the hands, of the entire body -- and the meaning of that motion. Is it a dance, a military march, a heartbeat, a run to the finish line, the rocking of a baby, the breath between sobs of grief? Tetzlaff seems to know how to find the truth in it, and then paint it in a myriad of musical colors.

During the first movement the music went from elegant to insistent, and down to a daring pianissimo - how could he play so softly? And then he emerged with such a fragile trill - what a sensation, of being on the edge. For the cadenzas, Tetzlaff used a set of cadenzas that Beethoven had written when he re-imagined his violin concerto as a piano concerto. In other words, the cadenzas were originally for piano, and Tetzlaff arranged them for violin back when he was 15 years old. They definitely felt different from the oft-used cadenzas by Kreisler, Joachim, etc. The first-movement cadenza does a little dance with the timpani, which then seems to march off into the distance, allowing the violin to return to its virtuosic nature. But when the orchestra comes back in, Tetzlaff played this melody in a very direct way -- not romanticized or drawing anything out. He had said that the melodies in the first movement have the simplicity of children's songs -- his playing fit that idea.

In the second movement, the orchestral introduction was restrained and quiet -- not very sustained, with little vibrato, and as requested by the composer, literally muted. The violin is more of an accompanist in the beginning; in our interview Tetzlaff had compared the soloist's part to "nature sounds." If the he was the bird, singing to his surroundings, he was certainly the center of attention. Most arresting was a section near the end when he finally plays the full melody: he stripped the musical line down to the finest thread, using that thin voice to sing the melody, tell the story, and dance into the delicate arpeggios near the end of the movement.

In the last movement everyone let loose after all that tightrope-walking. It felt edge-of-your-seat fast, a little risky, and Tetzlaff played with gusto.

As an encore Tetzlaff played the "Largo" from Bach's Sonata No. 3 for solo violin

LACO's program also included the U.S. premiere of a new work by Swedish composer Albert Schnelzer called Burn My Letters: Remembering Clara, a pleasing piece that could easily be the film score to a movie called "Clara and Johannes" (if she hadn't burned those letters, perhaps we'd have the script!) Clara Schumann is musically depicted in solo flute and Johannes Brahms in solo bassoon. I particularly enjoyed a fugue-like section that seemed to be in a fast seven - an asymmetrical dance. During the second half LACO performed Dvorak's Symphony No. 6.

February 11, 2020 at 11:59 AM · His recent recording of this piece was placed on gramophone’s list of the top 50 recordings of Beethoven up there with the Perlman and Isabelle Faust/Abbado recording