V.com weekend vote: What medium do you use, when you listen for musical reference?

But the question is, in what medium would the current student and parent wish to listen to such a recording? Alfred said it would be available as CDs and on SmartMusic. Is that set-up going to reach its intended audience of mostly-millennial parents and their post-millennial children?

This made me curious: what is the most common way that people find musical reference material these days? After all, it's certainly not just Suzuki students who use listening references -- we all do, for different reasons. For example, you might want to: 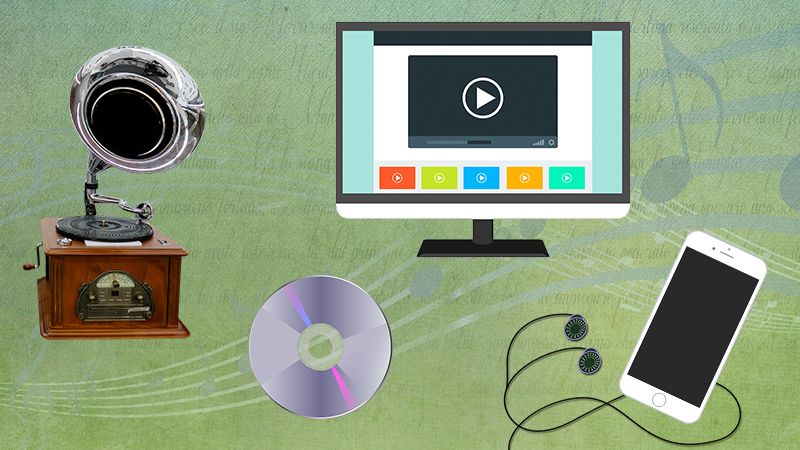 Or you may simply get curious about a particular composer like Ravel, and want to listen to everything he ever wrote. Or you might really enjoy an artist or ensemble in live performance, then want to hear other music performed by that artist or ensemble.

When you need a musical reference, where do you turn? What is the first medium that you explore, to find what you need? Do you have a CD player at this point? Do you subscribe to any streaming services? Would you subscribe to more, for certain recordings? Or do you mostly seek out free recordings online? Please participate in the vote, choosing the option that you feel you use most. Then share in the comments how you find recordings and listen to them these days, and how that has evolved over time.

February 7, 2020 at 10:45 PM · That would "something else," Michael! :) I didn't include radio because it's harder to use it for reference, though if you were seeking a specific piece, I suppose you could go through the posted schedule for your local classical station and see when they might be playing it....

February 7, 2020 at 10:54 PM · Multiple sources, in order of most used to least used: Spotify (convenient to download music on the go, you can make playlists with as many different interpetarions as you can find, plenty of classical recordings available), CDs (I have a big chunk of the standard concerti and sonatas on CD and I listen to them once I've heard a variety on Spotify), Youtube (for rare pieces that I can find, or so thay I can watch a video of the performance), radio (a bit hit and miss, but still listen in my car), live performances (when possible).

February 7, 2020 at 11:06 PM · Spotify is so great for sharing playlists and such. YouTube has improvedtoo.

February 8, 2020 at 12:16 AM · Spotify is my go-to when I want to hear multiple recordings of a piece, but I use YouTube almost as much -- I've noticed that rarely-performed pieces are often easier to find on YouTube than on Spotify! I have an extensive CD collection, but there are only a handful of pieces I have even two versions of. I usually only buy a CD when I'm fairly certain it's my preferred interpretation.

When playing along with a recording, I like to use a YouTube video if possible, because that way I get at least some visual cues, making it more like playing with a conductor.

February 8, 2020 at 05:05 AM · When our amateur orchestra starts working on new material, our music director posts links to YouTube recordings. I plug these into one of the YouTube-to-MP3 services. I can transfer the ripped MP3s to my MP3 player and listen to them in my car, or play along with them on my home machine (through a slow-downer if necessary) for practice.

February 8, 2020 at 03:13 PM · Paid streaming -- YouTube at present. I'm a YouTube Premium -- formerly YouTube Red – subscriber. For a small monthly fee, I get all the performances I want -- without those loud, annoying ads that interrupt the videos at the worst possible moments.

This is great for violin studies -- and much else. I've also gained a small Spanish vocabulary by watching Italian operas with Spanish subtitles. During my last school years, I learned a good number of these works in the original language, on my own time -- nothing to do with violin studies. Since Italian and Spanish are in the same family of languages, I can tell from the subtitles that some Spanish words are identical to the Italian -- padre, casa; very similar -- siempre/sempre, tierra/terra; or markedly different -- hija/figlia.

For German, I start with my first language, English, which is a Germanic language. Again, I can see which words are the same in German/English -- Hand, Horn, Hammer, Finger, Ring; very close -- Bär (Baer)/bear; or quite different -- Stimme/voice.

BTW, I strongly recommend using a reference medium before seeing large-scale musical dramas like Wagner's Ring tetralogy. I saw the 2nd, 3rd, and 4th installments of this saga on stage -- I will remember the experience all my life. If I hadn't done my homework well in advance, I wouldn't have gotten nearly as much from the stage performances as I did. Subtitles are great; but I didn't need them -- I already knew what the characters were saying.

February 8, 2020 at 07:07 PM · I use YouTube for reference material. I also bring a TASCAM recorder to all of my lessons, tape the lessons then download them into my computer. Next, I transcribe them into detailed notes for the week between lessons, and read them before each practice session. If I didn't do this, I know I'd forget some important details. I also ask my teacher to play the piece(s) for reference, marking in the notes where to find each selection on the recordings.

February 8, 2020 at 08:40 PM · I use YouTube often for quick reference because I almost always can find what I'm looking for. Amazon Music is my paid subscription which I prefer for "real listening". I still love cd's but most of my students don't own a player. I'm not sure how used SmartMusic is, but I don't have it.

February 8, 2020 at 09:41 PM · Yikes, I am a geezer. Old school, when you want to know what a piece sounds like you try playing it, working out the melodies, harmonies, counterpoints from the printed page.

I have a new 10 year old student who has been steeped in Suzuki and I presented her with a printing of "Oh Mother I Can Tell You..." (aka: Twinkle) in a key that Suzuki doesn't use. I told her it was "Twinkle" and she launched off in A-Major when the music on the stand was in G-major.

It is true for most of human history learning was done mouth-to-ear, passed down, memorized, passed down again,... Plato thought that writing was cheating. Yet today our libraries are growing larger and larger. Sorry Plato - print isn't cheating.

Yet, written words, music is stored memory, a way for us to potentially travel in time to what the originator was thinking.

Most often I'll hear a piece of music on the radio, check the station's log and go to IMSLP or some other sources for more modern music to see the printed version myself.

I don't buy the idea that music has "one right way" to be played. It is symbolic logic on paper (sometimes on a screen to be sure). It isn't static, carved in stone, or otherwise sealed in amber for all eternity. It is a living breathing art form that each generation discovers and adapts and passes along in their interpretations of what the originator wrote down.

Yes, I listen to radio, CD (during pledge drives or areas of poor reception), watch performances both live and on television, even the occasional YouTube. Yet there is something in putting the page on the stand, tuning the instrument, studying the page, putting bow to string and launching into the unknown that is pure magic.

February 9, 2020 at 05:38 PM · YouTube if I need a quick source or reference but I still buy music via iTunes if I need to listen to it multiple times and I have no internet connection and I have exceeded my data services on my phone.

But if I were a Suzuki parent with a young child, I'd probably set up a speaker connected to my phone or other mp3 player at home.

February 9, 2020 at 08:36 PM · For reference I think nothing can beat IMSLP so long as the music is in the public domain. You have to be a paying member to listen to all the recordings but even the ones that are accessible to anyone represent a pretty large collection.

I actually don't understand why the Suzuki materials needed to be recorded. I don't remember any of my teachers playing anything for me (other than demonstrating a detail). One of them even told me that he did not play for students on principle: To avoid having them frustrated by the unbridgeable distance between the quality of their playing and the professional execution of the teacher (a reason which may possibly be based on unpleasant recollections from his own youth, who knows).

February 9, 2020 at 11:17 PM · The Suzuki Method is designed to enable children to start learning to play violin before they are able to read language. The youngest students are expected to learn completely by ear for the first two books before they start to ease into note reading. Up to that point, the printed music is there for the teacher and for older students.

It depends on the music. If it's something I'm learning for orchestra that I don't much like I'll go to YouTube for a full version and turn it into an mp3 (to save data) which I'll ditch after the concert. Plus I'll get my teacher or the first viola to make a recording of my part for me. If it's a piece I love and will listen to over and over, I'll look around for a recording I like and buy the CD. I try to use platforms that pay the musicians rather than the record companies (eg bandcamp > spotify) if I'm downloading. I'll still get someone else to play my line because I find it hard to hear everything the viola or vln 2 is ding in the middle of the orchestra.

If it's a folk tune I most likely filmed someone playing it on my phone so I could see what they're doing with their bow and recorded it slowed down to pick up all the ornaments and fiddly bits. I'll usually try to find the chords somewhere to compare with what I'm hearing.

If the workshop or session is a band I like I'll also buy the cd (on the grounds that if I don't want them to get day jobs and stop making music, then I need to support them).

February 12, 2020 at 06:00 AM · When my now 26 year old son was a newborn, his babysitter's daughter was on Suzuki Book 1. I would go over to their house in the evening to get my son and the babysitter would be turning on the tape player to play the piece her daughter was working on and her daughter would play along. In those days, it must have been a cassette tape.