December 16, 2020, 12:50 PM · Earlier this week TwoSet Violin's Eddy Chen announced via YouTube that his partner in comedy, Brett Yang, has been feeling unwell and that as a result, the two will take a break from their five-video-a-week schedule for some rest and recovery. 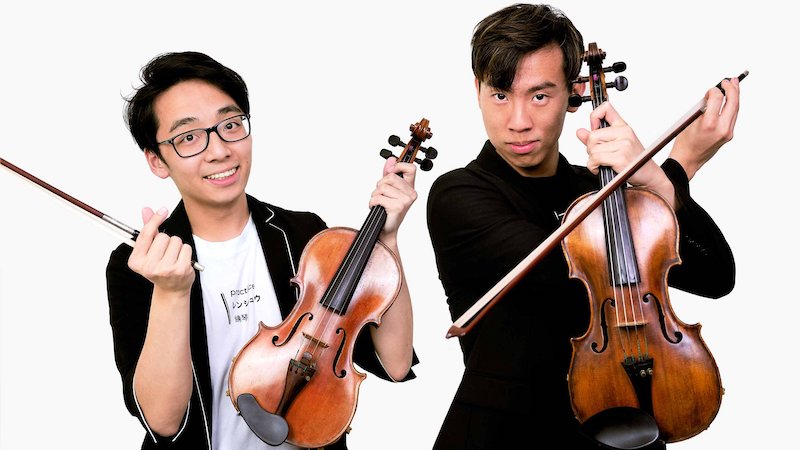 TwoSet Violin was founded in 2014 by Australian musicians Brett Yang and Eddy Chen. They have largely succeeded in their mission "to make classical music relevant to the modern generation through fun, humor and simplicity" -- garnering nearly 3 million Youtube subscribers with their zany and off-kilter videos that depict life as a classical musician. They also have toured the world with live classical comedy performances, including a sold-out debut at the Sydney Opera House.

Several weeks ago, TwoSet had cut back their publishing schedule to three videos a week after a bout of illness that landed Brett in the hospital. His condition apparently worsened following the subsequent filming of their Blind Dating Musicians video, which was posted on December 6.

"He wasn't feeling well that morning, but we both underestimated his condition," Eddy said. "Afterwards he was feeling very unwell."

Eddy declined to name a particular illness, saying that "the diagnosis is not 100 percent clear, but what he has is not life-threatening, so he will recover."

The length of their hiatus will depend on Brett's recovery: "It's uncertain how long it will take at this point; it could be two weeks, or it could be a couple of months," Eddy said. "We decided this is for the best, we should take health very seriously."

Indeed, we wish Brett a speedy, uncomplicated and full recovery and both of them a well-deserved rest.

December 16, 2020 at 07:53 PM · They're nice boys. They have the ears of a lot of earnest and precocious young musicians, and by publicly being willing to take a break and prioritize their health, they are hopefully setting an example to follow. A lot of musicians can have such intense tunnel vision that they overpractice and obsess and end up with all kinds of injuries, physical, mental and spiritual. I hope they come back and emphasize this more for their young audience.

December 17, 2020 at 01:00 PM · I just checked their Youtube channel and it's fun watching them especially their reviews. Quite sad that they are taking their break but it's for their health so I might enjoy the old videos and wait for them to be back again