But what does that mean for the future of art and music? Violinist Hilary Hahn wants to make sure that artists have a say in the development and direction of artificial intelligence, and so she has teamed up with roboticist and AI specialist Carol Reiley to form an organization called DeepMusic.ai. Its goal is to weave the artificial intelligence and arts communities together, so that the future of AI can be influenced by the vision and needs of artists.

I spoke with Hilary and Carol last week about their inspiration and vision for DeepMusic.ai - below is a video of our full conversation, which took place via Zoom, with Hilary in Massachusetts, Carol in Northern California and me in Pasadena, Calif.

On Tuesday night, Hilary performed the online world premiere of one of three pieces that DeepMusic.ai commissioned from composers Michael Abels, David Lang, and Dana Leong, who each wrote a piece with AI-assisted software programs. Hilary performed David Lang's "out of body" for solo violin. (see video below).

Hilary has worked with David before -- he wrote "light moving" for Hilary's 2013 project, In 27 Pieces: the Hilary Hahn Encores. Hilary described him as a minimalist composer, whose minimalist music reflects his way of living. She wondered: how would he interact with AI? Not surprisingly, he found his own unique way.

For "out of body," he began with a shifting-meter, rhythmic, minimalist, repetitive idea - "but it's just off-kilter enough," Hilary said. "He likes to throw off the player, he likes to write things that lull you into thinking you know what's next, and then you get tangled." To him, that unpredictability is a sign that his music is not falling into patterns. Lang chose to begin the piece with a section that was all his own writing, followed by a section that alternates his notes with AI notes, and ending with all AI notes. In interpreting the piece, Hilary decided, "I'll just do all of his notes down-bow, and then I'll do all the AI notes up-bow." So the piece starts with down-bow double stops, eases into an alternation, then "at the end I just do a bunch of up-bows, which is the AI finishing its melody."

The piece has another amusing secret: its AI muse was inspired by the music of....Journey! That's right, that 80's band that wrote "Don't Stop Believin'"!

Using Open.ai's MuseNet program, Carol's team used a clip that David had written, and then they picked different "influences." The way it worked was that the piece would begin with the music written by David, then it would continue "in the style of...." whatever the influence was.

"I generated 20 samples that he would pick from, from Lady Gaga to Bach to Mozart," Carol said. Every time the computer generated something, it was different, even when picking the same parameters. "We saved those 20 clips and gave it back to him and his team."

"Surprisingly, they chose the Journey-influenced clip!" Carol said. "So it's David, co-written with Journey-style music!"

"I was intrigued to learn that AI is at a point where the projects that are in development now will be the basis for a lot of the AI products in the future," Hilary said. "So the field is forming, but we have a small window right now to be part of the conversation, and I think artists have a lot to offer this conversation. AI scientists are very artistic people and it's interesting for artists to speak with them and figure out: Where is the common ground? Where is the innovation?" 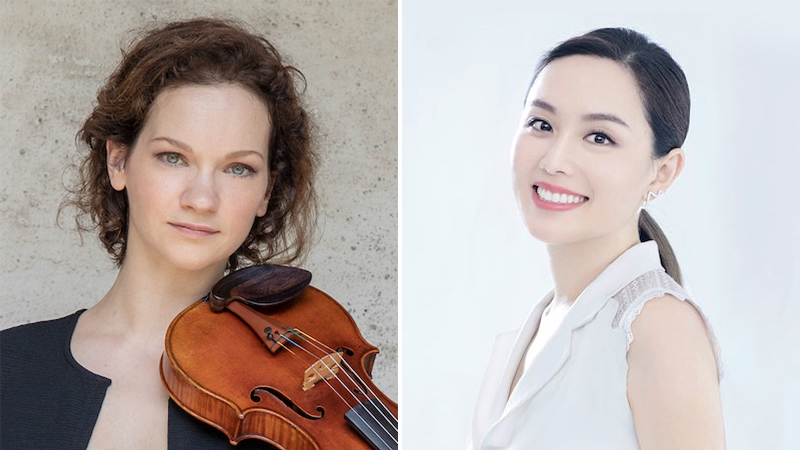 "It's so ground-shifting," Carol said. "We use the analogy that AI is the 'next electricity,' where you don't even know how it pervades through every facet of your life." For example, in the span of just five years, the idea of self-driving cars went from seeming like a pie-in-the-sky idea to being something that is happening in reality.

It helps to get in on the ground floor of these developments, Carol said. "Technologies that can impact millions of people are founded or built by a team as small as five to 10 people. So a very small number of people can build something that can impact the future of a whole industry."

"That was why I thought it was so important to get professional artists -- and their voice, their creativity and their process -- early on, while these startups are still forming," Carol said. "These huge decisions will impact not only the artist, but also the future of business, copyright laws, and ethics. We need to make sure these companies have a strong moral compass," so that the focus is not solely on the potential for monetary gain. It would be best to avoid the creation of "startups that might just undercut the artist and replace them, as opposed to having companies that supplement artists and build tools for them that can help them do the tedious things."

"People still have their humanity, but they're using AI tools -- like GPS, and auto-complete and auto-correct -- to get through the day," Hilary said. "I think about all the things I do now that I didn't do 20 years ago, and I think we're going to see that happen in creativity as well. It's fascinating to debate these questions with people who are considering them every day. These debates and existential questions overlap in fascinating ways, and both fields stand to gain from these conversations."

December 16, 2020 at 10:17 AM · This reminds me of Orwell's book "1984". Julia, main character Winston's love interest, works as a mechanic in the Fiction Department of the Ministry of Truth. Her job is to perform maintance on the novel writing machine.

What does it do? Through a complex system of mechanisms (no computers back in 1948, when Orwell's book was written) it randomly picks out plots, characters, and settings from thousands available and types out books without human input, for the reading pleasure of the Proletariat.

December 16, 2020 at 04:02 PM · Arguably, that's already what many contemporary novelists and screen writers are doing: writing to fill a series of template plots --- they call them "beats".

December 16, 2020 at 09:27 PM · Musicians have been employing artificial intelligence in their work for decades. Phil Winsor and David Cope were very active in exploring the application of it to musical composition in the early 1990s. Many of us are probably more familiar with applications such as computer programs that scan sheet music. There are so many applications these days, such as ones that identify pieces of music.

Sadly, many of these efforts were not well received. It took more than a generation, but things are changing.

December 17, 2020 at 09:57 AM · When I was a little kid I had the privilege of being exposed to the world of computer music. My dad was teaching at Cal State Long Beach, the head of the music department was Dr. Gerald Strang, and they became good friends. Ex-assistant to Schoenberg at UCLA, Dr. Strang was one of the early pioneers in the field. I remember that his compositions were endless rolls of perforated computer paper.