December 8, 2020, 10:00 PM · Composer Ludwig van Beethoven's birthday -- 250 years ago this week -- has inspired an entire year of celebrations around the world, with recordings of his works, special concerts, performances and lectures.

This week brings another way to look at the life and influence of Beethoven: through the lens of China, where his works began to take root culturally around the turn of the 20th century. The music of Beethoven - and all Western composers -- were later banned for a time during the Cultural Revolution (1966–1976), after which Western classical music enjoyed a strong resurgence and popularity that remains through today. 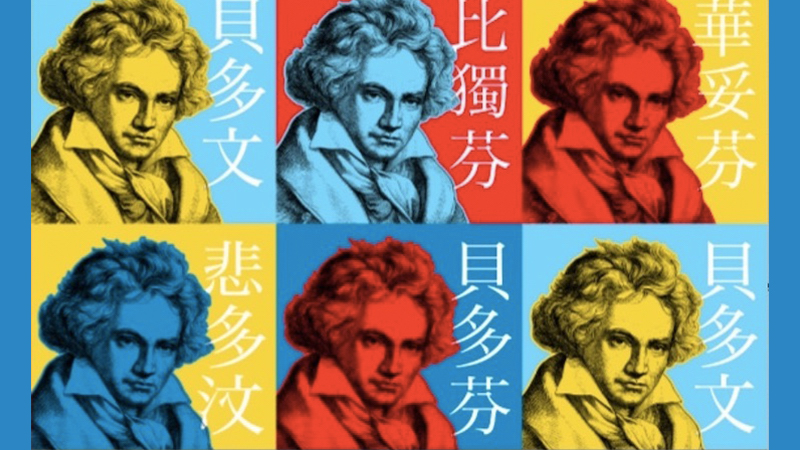 "Beethoven is the most well-known western composer in China," said Jindong Cai, Director of U.S.-China Music Institute at Bard College Conservatory of Music and co-author of Beethoven in China (affiliate link). "People relate not only to his music, but to his life's story." Beethoven endured family dysfunction, an alcoholic father, a solitary existence and eventually, nearly complete deafness -- and yet he triumphed. "In Chinese society, your family tells you that you have to work hard to be successful; you have to go through difficulties ad obstacles. Beethoven's life story enhances that kind of thinking in China."

Starting Friday, Bard's U.S.-China Music Institute is holding an eight-day online celebration of Beethoven’s cultural and musical rise in Chinese society, with concerts, lectures, films and webinars. The event, called China Now Music Festival: China and Beethoven, is free to anyone who would like to attend. (Click here to register.)

The online festival celebrates a meeting of minds between Chinese and Western musical cultures, with Beethoven center stage. It opens Friday with a concert and lecture tracing the history of Beethoven's music in China; a concert Sunday featuring a reimagining of a Beethoven for mandolin and piano "with Chinese accents" - featuring pipa virtuoso Wu Man and composer/conductor Tan Dun; a webinar Monday about three modern productions currently in China that are inspired by Beethoven; as well a performance Tuesday by the Shanghai Symphony with Long Yu, featuring violinist Ning Feng; a film screening and discussion Wednesday and Thursday about "Beethoven in Beijing" about the Philadelphia Orchestra coming to China in 1973 (during the Cultural Revolution); and concluding next Friday with the screening of a November 2020 performance of Beethoven's complete "Egmont" with the China NCPA Orchestra in Beijing.

The story of Beethoven in China is a fascinating one, starting in the late 19th century, when China's port cities were opened to the West. With the influx of foreigners came the introduction of Western music -- and the music of Beethoven. But at first, the music was strictly by foreigners, for foreigners.

However, in the early days, Chinese people were banned from concerts, and they were not allowed to play in the orchestra. The music was simply for the entertainment of foreigners.

With the arrival of Italian conductor Mario Paci in 1919, that began to change for the Shanghai Symphony. Cai said that Paci's feelings about permitting Chinese people to attend the concerts were so strong that in 1925 he said, "If you don't want Chinese to come to my concerts, I'm going to quit." Subsequently, the concerts were opened to Chinese.

Likewise, in 1927 Paci admitted the first Chinese musician to the orchestra -- Tan Shuzhen, a violinist. When Tan was given a chance to try out for the orchestra, he was placed in the second violins, last chair. On that day, the orchestra played Beethoven Symphony No. 5. Upon recommendation of his stand partner after that rehearsal, Tan was allowed to continue playing with the orchestra.

Later in the 20th century, during the 10-year Cultural Revolution, all Western culture -- including the music of Beethoven -- was forbidden and people like Tan were beaten and abused.

However, revolutionary music was permitted, and so children still learned to play Western instruments.

Cai was one of those children who learned to play during that time - "I loved to play the violin, even to play revolutionary songs," he said. However, he did listen to the music of Beethoven, in secret.

Once the Cultural Revolution was over, "there was a big surge of classical music," Cai said. In fact, one defining moment that truly signaled the end of the Cultural Revolution was when, in 1977, the Communist Party granted permission to Beijing's Central Philharmonic to perform Beethoven's Fifth Symphony, a performance that was broadcast nationwide.

From then on, China has stayed strong in the classical music scene. "Almost every symphony in America has a least one Chinese musician, mostly string players. Major conservatories depend on students from China."

In China itself, the government has built state-of-the-art concert halls and opera houses, with symphonies emerging everywhere in the country, even in smaller cities. As Cai said: "The classical music scene in China is vibrant."

For more information about the China Now Music Festival: China and Beethoven and to register to see the free online events, please click here.

December 9, 2020 at 06:34 PM · I bet the anecdote on how Beethoven rescinded his dedication lf the third symphony is censored in China.

December 9, 2020 at 07:27 PM · Kind of useless conjecture when not backed up by any first-hand knowledge, Albrecht!

December 10, 2020 at 01:17 AM · Hi Elisabeth, it was not possible to understand your reply. You made need to have someone edit it before you post. Thanks.

December 10, 2020 at 04:44 PM · History is messy and so are current affairs. If we are wise we will learn from the mistakes of the past and forge a brighter future of cooperation. Cultural exchange offers opportunities for progress, partly because it is often written off by politicians as economically insignificant. The cruel irony is that Mao understood the power of artistic expression -- that's why he worked so hard to control it.