I do value the virtual and recorded music that I can still access -- through my various devices and a few good speakers. And of course, I have continued to "make music" in the ways that I can -- playing my violin alone, collaborating virtually, and teaching virtually.

Thanks to the live-music-starvation diet handed to me by the pandemic, though, I'm reaching a new appreciation for the profound difference between the live and virtual performance experience. 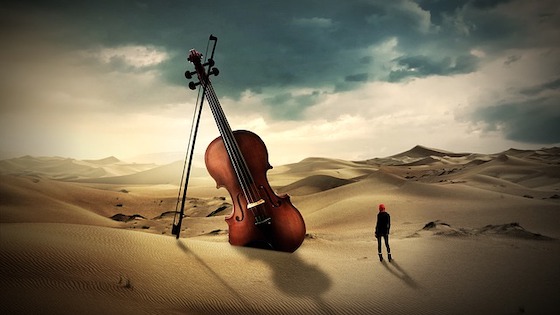 Playing together over Zoom is not the same as the back-and-forth of playing a duet, in person, with one of my students. Virtual collaboration not the same as playing quartets in the living room. It's not the same as my lone violin voice becoming one with many in that giant organism that is the symphony orchestra.

And watching live-streamed performances is not the same as being part of a full audience, in one grand room, witnessing a musical performance together. And Zoom church - what I would give, just to sing in church again!

"Psychologically, there is a huge difference between an empty, silent room, and a room silent, with attentive, listening people," Anne-Sophie Mutter told me during a 2010 interview. "It's a totally different atmosphere, and in that atmosphere wonderful things can happen."

Absent that atmosphere, music-making can feel like an oddly lonely endeavor.

Because teaching is such a huge part of my life, I acutely feel the loss of playing duets with my students. While I can instruct them using words and demonstration, I can speak a different language when we play together. I can respond to them, and they can respond to me. I can push for the crescendo, I can turn on the vibrato as a signal to tell them to do so. I can adjust in the moment and let them know right away if anything isn't fitting rhythmically, and I can pull the beat back at the end of a piece. We both can hear the harmony, feel the rhythmic interplay, etc.

On Zoom, we still can play a duet -- kind of. The student must be muted in order to make it work with the computer lag. That means the student can hear me and hear what we are doing as a duet, but I cannot hear the student playing. I can't adjust, call out anything in the moment, or hear any of the harmony myself. I can still push for the crescendo, etc, but I'm only imagining the result -- I can't actually hear it. It can feel very one-sided. If I look up at the screen, the student is several seconds behind me, due to the lag. When it's over, I have to ask, "So how did it go? Were we together?"

It's still worth doing, and I often get an excited smile and thumbs up at the end, and when I un-mute the student: "It really worked this time, it sounded really cool and we were right together!"

I have to take the student's word for it, because unfortunately I didn't hear it. All I can say is, "Great! Glad it worked!"

A few weeks ago, after one of these nice successes, in which I played my half of a Bartok duet from Doflein Book 2 with a student, I actually said what I felt: "I really wish I could have heard it!"

My student paused. "Would you like to?" he said. "We can switch!" So we did, and wow! It was good to confirm my student's good rhythm and hear the harmony. "That was weird!" he said afterwards, having been in the lonely spot!

So while this situation does provide back-and-forth and music-making, it can still feel one-sided to the person who plays alone.

Early in the pandemic, I created a play-along Bach Double video, in which I played the first movement, accompanied by me, with me playing Martha Yasuda's orchestral reduction. That's three me's! I enjoyed the novelty of putting it together with the Acapella app, and I do hope it provided a few violinists out there some company - or accompaniment! And yet -- here's another instance of strangely lonely playing. At this point, the novelty has worn off. I'd certainly rather play with someone else.

And that brings me to the idea of virtual collaboration. This fall I collaborated with two of my teenage students to create a video of the second movement of the Bach Double. I played the "orchestra" part, and then one student played first violin, while the other played second violin. Except for this performance, we never actually played simultaneously. We each recorded separately, at different times, from our separate homes. I started with the orchestra track, passed it to the second violinist, who later passed it to the first violinist. Separated by time and place, we still made a nice video. We premiered the video at the studio recital, and I could see that it was gratifying for my students hear the final product for the first time. "I can't believe that this ACTUALLY worked!" said the second violinist, who seemed genuinely surprised. Having recorded before the first violinist, she had never heard her duet partner play, until hearing the final product!

But what a weird way to do things! In person, we would have held a rehearsal together, maybe a few. We would have talked, repeated passages, tried different ideas, communed a bit. Doing it virtually, my students didn't even actually need to talk with each other, meet in person, or do anything except play. Mostly, we all needed to coordinate metronome markings, A442 tuning, and dynamic ideas. Then we simply needed to record enough "takes" until it meshed with the last version recorded.

Similarly, the youth orchestra students that I've been coaching are putting together an excerpt from Brahms Academic Festival Orchestra - each has recorded his or her part separately, wearing headphones and watching and listening to a video to synchronize while playing, so they can all be together. Dozens of individual recordings will be assembled as one, for a final performance video.

While the resulting product will sound like an orchestra, making a video alone in your bedroom does not exactly feel like playing in orchestra with dozens of colleagues! And yet, the project provided a goal, and that goal keeps an important community together, because....

We Will Make Live Music Again

One day, it will be safe to breathe the same air again. Choirs will sing. Orchestras will play. Concerts will happen, and big crowds will watch those concerts in person, together and side-by-side. We just have to all make it to that day, and safely.

Meanwhile, keep practicing, keep making music. Do what you can to preserve your musical community, whether that means donating to your local orchestra, buying tickets for online concerts, or just finding ways to keep your musical group together. And above all, keep yourself and those around you safe and healthy, so we can make music together in the future.

November 25, 2020 at 03:58 PM · I can relate to almost all of this. I don't teach violin students, but I have my virtual Biology students, and we have a listening hour and a talent show on zoom for the school. I'm running out of unaccompanied Bach to play!

Gene Huang and I have been working on Mozart's Sinfonia Concertante and before CA went back to the purple tier we got together in my backyard and rehearsed on the deck with masks and social distancing. It went pretty well but now it's back to practicing with YouTube again.

November 25, 2020 at 04:24 PM · During the summer, several of my chamber groups played on umbrella covered patios. Then we moved to open garages with heaters. Now we have had to stop all that, so I'm finally discovering Jamulus. I've played twice already this week with friends. It's pretty easy to get started. And without the visual cues we often depend on, I'm listening even more closely and hearing things I haven't heard before. We've talked about having a Zoom session going so we can get some visual cues. Very exciting! It could really save this winter.

November 25, 2020 at 05:38 PM · If we can just hang on a little longer we can do this. It’s so very sad for everyone and I must admit I have my up days and my down days...it’s been an emotional roller coaster and very hard at times. But music can be the golden thread that keeps us going and we will be back again. Stay safe all and keep playing, it will lift your mood.

November 25, 2020 at 07:38 PM · I truly miss performing live concerts. Thankfully things have not shut down here in Canada to an extreme, so I am still having in person lessons and in person small ensembles, all distanced and masked. I've also been involved in some virtual ensemble collabs where I play with a click track and the recordings get mixed together as a for-fun, and I've also been participating in some informal recital on some Discord servers to keep up my motivation, all of this being done without accompaniment.

November 25, 2020 at 09:14 PM · Thank you so much, Laurie and those who have posted responses. This is like group therapy at its best. Laurie, I especially like your expression of feelings about playing together in real life and playing together virtually. I, too, have two distinct feelings about playing virtually. It’s not as good as the real thing, but it is a lot better than nothing. I really appreciate your parting advice to look forward to playing together for real again and to staying safe now. Keep the faith!

I have friends who play instruments (guitar and voice for one, bagpipes for the other) who still play solo outdoors with live audiences. The guitarist / singer plays solo on his patio at the same time every week, and neighbors and passersby can come by and listen. The bagpipe player plays his instrument while walking through his neighborhood or in a nearby park on Sundays. He has fun watching his neighbors come out on their porches to listen. He also feels satisfied because so many people miss their church communities on Sunday and he brings them something fun to connect with.

I used to live in a suburban condo complex where a lot of people hung out on the grounds. The kids in my neighborhood used to tell me that the liked listening to me practice inside my home. If I were there still, I would take my fiddle out on my porch and play for anyone within earshot.

Laurie, I really like your parting advice to look forward to playing together in the future and to stay safe now. I wish that the many musicians who are not on violinist.com could read this and feel inspired, as I do.