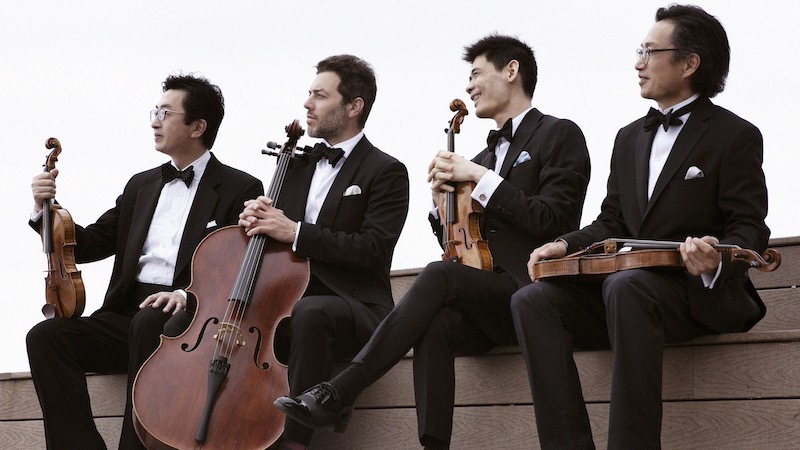 "Joining this esteemed group of colleagues is a dream come true," said Yu, who was born Inner Mongolia China and moved at age 11 to Shanghai, where he studied with Qing Zheng at the Shanghai Conservatory. "During my youth in Shanghai, I admired the Shanghai Quartet as the prime example of how a string quartet should sound. My younger self would have been amazed that I would someday join as a member."

A recipient of both a 2019 Avery Fisher Career Grant and a 2019 Lincoln Center Emerging Artist Award, Yu earned his Bachelor’s degree, Master's degree and Artist Diploma at the New England Conservatory, where he was a student of Donald Weilerstein and Miriam Fried and served as Weilerstein’s teaching assistant. In 2010 he won First Prize in the Yehudi Menuhin Competition, and currently Yu performs on the 1715 “Joachim” Stradivarius violin, on loan from the Nippon Music Foundation.

Angelo's appointment follows the departure of violinist Yi-Wen Jiang, who fell out with the group after making a controversial WeChat post in March that was denounced widely in Chinese media as being racist. Shortly afterwards, the Shanghai Quartet announced that it had accepted Jiang's resignation. However, this fall Jiang, who has been a U.S. citizen for more than 20 years, filed a lawsuit alleging he was unfairly forced from the quartet and from his post at Montclair State University, seeking financial damages from both the quartet and the university. The story made the New York Times in September. The quartet has maintained that Jiang resigned voluntarily, expressing in a statement that "we regret that our former member, Mr. Jiang, has chosen, through his words and actions to put the reputation and success of the Shanghai Quartet at risk."

Moving forward, the quartet was faced with auditioning a new member during a global pandemic, which meant no handshakes, and no contact. For the audition, the musicians rehearsed six feet apart and wore masks. Nonetheless, quartet members said they felt a closeness to Yu.

"Our chemistry as musicians was immediately apparent," said cellist Nicholas Tzavaras. "For our first rehearsals, we were socially distanced, even wearing masks, but our playing clicked immediately. Angelo is a thoughtful, warm, and sensitive musician."

"Angelo brings a breadth of experience with him that is uniquely tailored to our work," said violinist and co-founder Weigang Li. "In addition to his
exceptional soloist abilities, he is an accomplished chamber musician and passionate educator. Being a devoted teacher was an important trait for us, and he also understands the demands of our international touring schedule. With family in Shanghai, he will quickly and happily adapt to the bicontinental nature of our quartet."

"Angelo reflects the next chapter and future of the Shanghai Quartet," said violist Honggang Li. "His presence will continue our tradition of excellence while bringing new approaches that inspire us. We are overjoyed he will join our family."

The Shanghai Quartet was formed by brothers Weigang Li and Honggang Li in 1983, soon after the end of China’s Cultural Revolution. The group came to the United States to complete its studies, and since then its members have been based in the U.S. while touring and leading chamber-music series throughout North America, Europe, and Asia. Tzavaras joined the group in 2000. The ensemble has released dozens of albums, embracing a range of music including Western, Chinese and contemporary works. The group has served as Quartet-in-Residence at the John J. Cali School of Music at Montclair State
University in New Jersey since 2002. As of this fall, quartet members joined the Tianjin Juilliard School as resident faculty members.