November 19, 2020, 1:35 PM · Violinists around the world are remembering longtime violin professor Victor Danchenko, who died on Wednesday, five days after his 83rd birthday. 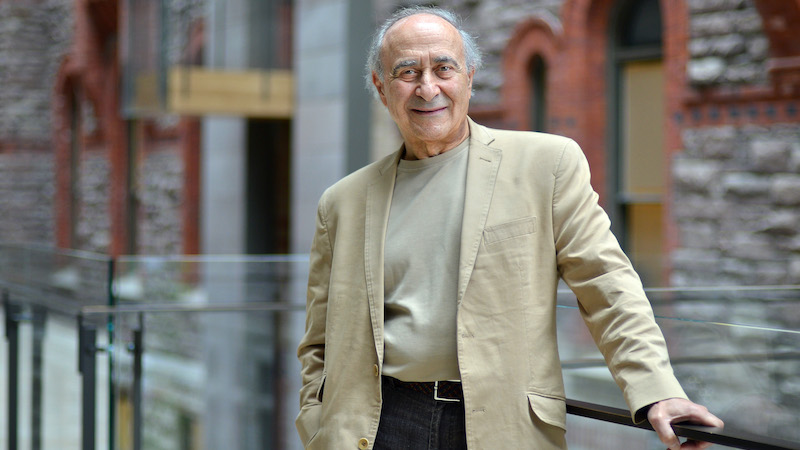 "Victor Danchenko was a true giant; both in a musical and personal sense," said former student Igor Yuzefovich, who studied with Danchenko at the Peabody Institute starting in the late '90s. "He embodied excellence, determination, devotion and love for the instrument and the music that he worked so tirelessly to instill in us, his musical children. He taught us how to live and breath music, and most importantly, how to continue teaching ourselves for the rest of our lives."

Born in the Soviet Union, Danchenko made his solo debut at age 16 with the U.S.S.R's State Symphony Orchestra, then at age 17 entered the Moscow Conservatory as a student of David Oistrakh.

Danchenko emigrated to the West (Canada, then later the U.S.) in 1977, followed a year later by his sister, pianist Vera Danchenko-Stern, with whom he performed on a regular basis, from childhood on.

"Victor was one of the most influential violin pedagogues of the 20th and 21st centuries, and a valued friend and colleague," said James Anagnoson, Dean of The Glenn Gould School. "He had a profound impact on generations of extraordinary young violinists, many of whom have gone on to distinguished concert careers as soloists, chamber musicians, and members of some of our finest symphony orchestras."

"It is very difficult to encapsulate a relationship of more than forty years such as I have had with Victor Danchenko," said Colburn School violin faculty member Martin Beaver, who studied with Danchenko for about eight years, beginning in the late '70s. "I first met this extraordinary man when I was 11 years old. Since that time, he has been, and will continue to be, a significant presence in my life. I have been fortunate enough to know him as my revered teacher, as a valued and most trusted colleague and advisor in many major life decisions and even as 'Grandpa Victor' to my daughters. Above all and through it all, he was my musical father."

"Victor Danchenko’s success as an artist teacher is a matter of public record," Beaver said. "He has produced scores of students who are active as soloists, chamber musicians, concertmasters, orchestral musicians, and (perhaps most importantly) teachers."

"So, what was it like to study with Victor Danchenko? In a word - INTENSE. Mr. D, as we students referred to him in private, was deeply committed to achieving the highest technical and artistic standards and equally determined to inspire the same commitment in all his students," he said. "I certainly cannot remember a single lesson during which he was anything less than 100 percent engaged and focused on our work."

"Thinking back, I am perhaps most impressed at how different his approaches were with each individual student. Certainly, there were common threads in his teaching, but I couldn’t necessarily identify a 'Danchenko system' with a clear order of repertoire and technical work," Beaver said. "I remember even as a teenager being fascinated to compare my repertoire ‘trajectory’ with that of my studio mates. He always seemed to know how to judiciously plan a course of study to capitalize on one’s strong points but also to challenge one’s shortcomings – the mark of a great teacher. "

"As a younger student, I do recall one strong mantra: 'Quality, not quantity!' He was a firm opponent of superficially racing through large amounts repertoire. He emphasized the importance of thorough and concentrated study – perhaps less repertoire, but following through to its completion."

Beaver's sentiments are echoes by violinists around the world" "Victor Danchenko was a great master and a gentle man," said violinist Shlomo Mintz on his Facebook page. "He will be greatly missed."

"Victor was a force of nature -- powerful and energetic, confident, passionate, and to those he would allow to see it-- a warm and affectionate human being," said violinist David Russell.

Danchenko was also known for bringing students to tears during their lessons. In a Facebook post, Russell described an interaction with a student at ENCORE summer camp. The student had learned Wieniawski's "Scherzo-Tarentelle" in one night, at Danchenko's request. Here's how the student described the lesson that followed:

Victor offered his opening comment: "Well first of all, the intonation isn't bad - it's NON-EXISTENT!" It went downhill from there, said the student. Victor asked, "How did you practice this? Show me how you practiced this!" So he began...stutteringly, repetitively playing the opening line. The student said, "I noticed that Mr. Danchenko's face grew redder and redder...until he suddenly erupted, saying: "My Gyod! How DARE you practice in my lesson! Get out!"

Russell later asked Danchenko about the lesson. "He looked at me with a grin and said, 'David, if I expect a student to play like Oistrakh, they have no choice but to give their all. If I expect less, they will always give it.'"

The "tough love" approach brought results, with his students winning major competitions, solo engagements and leadership positions in orchestras. Besides Beaver, his former students include Soovin Kim, Nicholas Kendall, Timothy Fain, Ryu Goto and Misha Simonyan, as well as students who went on to be concertmasters and members of orchestras such as the New York Philharmonic, Boston Symphony, Los Angeles Philharmonic, St. Louis Symphony, National Symphony, Toronto Symphony, and European and Asian orchestras.

Danchenko also served on the juries of many international competitions and taught master classes around the world.

Below is a video of students from Royal Conservatory of Music pay a musical tribute to Victor Danchenko, as well as performances by former students such as Martin Beaver (14:26), Soovin Kim (27:58), Igor Yuzefovich (33:26), Nicolas Kendall (39:18), Beth Ilana Schneider-Gould (1:00:21) and many more:

November 20, 2020 at 08:14 PM · Mr. Danchenko will be sorely missed. I remember my lessons with him very clearly. One of many comments in lessons he made was in regard to the Bach G minor Fugue. He said "You need to maintain perfect structure of the work, in particular the rhythm. Similar to the stones used to build a cathedral, let one note (stone) stray out of line, and everything will come toppling down."