V.com weekend vote: Do you find it difficult to string your violin (or other stringed instrument)?

November 7, 2020, 9:11 PM · This week I enjoyed some hilarious real-world confirmation that stringing a fiddle is indeed a special skill.

My husband Robert and I have enjoyed watching the CBS show The Amazing Race for many years, and the latest season began airing a few weeks ago. It features teams of Americans who travel in a sort of "race" around the world, with the producers giving them local "challenges" and tasks along the way.

Imagine my surprise this week, when one of the "challenges" for the contestants was to build a stringed instrument from items procured in a landfill! 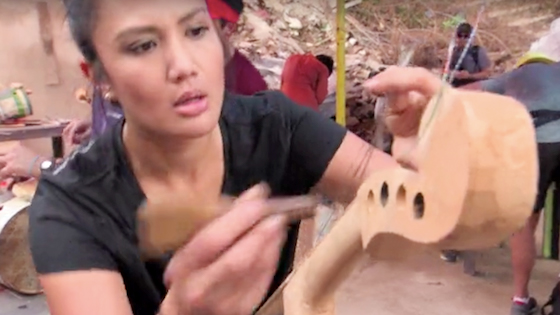 I'd actually heard of the "The Recycled Orchestra" a number of years ago. It's an orchestra created around 2010 by Paraguayan music teacher Favio Chavez. He solved the problem of procuring instruments for children by making violins, cellos and other stringed instruments from the contents of a landfill on the outskirts of Asunción, where the children live in poverty. It's a remarkable story that speaks to the power of music to shape the hopes and dreams of young people whose lives are very difficult.

But back to the Amazing Race -- the teams were tasked with scavenging for supplies and then making a cello using a big metal barrel, wood, nails, and an assortment of pre-made bridges, strings, rough-hewn pegs and tailpieces, etc. To help them along, they could refer to an already-made model. Assembly certainly seemed more challenging than putting together a piece of IKEA furniture. But what was the hardest part? The final step: putting on the strings!

Several contestants became extremely flustered, spending hours just on this step. Tailpieces fell off. Pegs caused great confusion. Strings broke. Bridges collapsed. One woman said in exasperation, "This is the hardest thing I've EVER DONE!" (And they didn't have to tune the instrument, just get the strings to stay!) In the end, everyone completed the task and delivered it to the children's orchestra, which was truly touching to see.

Beyond the serious issues of poverty and access to music education, this little segment made me ponder a more trivial question: Is it really so hard to string an instrument?

I could say, after doing it for decades, that it's all pretty straightforward. Of course, I'm generally not starting with a bridge down, with no strings! But the first few times that I changed a string, I can still remember that it took a generous amount of time and concentration. After all, this is 300-year-old technology. The pegs stay put only because they are jammed into the peg box. Each string goes into a little hole in the peg and needs to be looped in just right. And the bridge stays erect only because it is held in place by the pressure of the strings. It's a complicated balance act.

Incidentally, next week I'm planning to make a little video about how to change a string, if you'd like a little tutorial for yourself or someone else. (Some of us have not changed our strings since the start of the pandemic!)

In the mean time, please share your thoughts on this question: is it so difficult to string your instrument? Do you have enough experience that it goes pretty smoothly? Or do you tend to have complications each time you do it? Or, do you simply have someone else change the strings on your fiddle? Please participate in your vote, and then share your thoughts. If you do string your own instrument, did someone teach you to do so, or did you learn on your own? You can also share your thoughts at endeavors such as the Recycled Orchestra.

November 8, 2020 at 05:20 AM · My violin teacher taught me the trick of winding the string on the peg so that the pressure pulls the peg inward, not outward. But my non-string playing husband changed the first string I was forced to change myself--the pegbox was very narrow and he had the right pliers for the job. With only one viola, I _have_ to rely on myself or else not practice for several days while I get someone to do it for me.

I can appreciate the challenge though, I walked my niece through changing all her strings for the first time over zoom two weeks ago (she's 14).

November 8, 2020 at 02:16 PM · As I've been playing for over 40 years I've developed the skill to change strings easily. Having students playing on fractional instruments got me to using fine tweezers to guide strings into small pegboxes. Occasionally I'd like to have a third hand but I do manage.

When I was at rehearsals tuning every week I often adjusted bridges that were leaning over, loosening fine tuners that were all-the-way-down and re-tuning the strings, simple maintenance along with notes to parents about problems I could not fix that had to be addressed by a luthier.

My teacher made me understand that basic maintenance was part of being a violinist - sometimes you have to fix things yourself because the luthier isn't available.

During this period of virtual lessons I've had two visits from the parents of my remaining two students to replace strings, adjust bridges and fine tuners. They would not come for outdoor lessons but when strings break, bridges noticeably lean, and fine tuners don't have any more turns,...

November 8, 2020 at 03:08 PM · Just yesterday, I changed my violin strings myself for the first time in a VERY long time. I read an online instruction article about how to do it. It took me quite a while and I had a few moments of frustration, but I got the job done and I love my new strings. My winding is not nearly as tidy as the luthier's but I'm okay with it :)

November 11, 2020 at 04:17 PM · I voted "I'm adept", as I wouldn't go to a luthier with a job like that, but I can't do it without a pair of forceps/tweezers to pull the string through the peg hole, and then I need to twist the string round itself a bit before starting to turn the peg (aking sure, of course, that I wind so that the pressure pulls the string inward).

Also, this is only old fashioned pegs - I've never tried to change a string on a planetary peg.

November 13, 2020 at 01:13 PM · The key step for me is to pull the peg out partially before putting the sting through the hole. Now do one wind with the string on the far side of the hole from the peg-head then cross the single wind as you push the peg back in. This secures the string and puts the ensuing winding on the peg-head side of the peg box. If you gradually wind towards the outside you end up with a secure and very tidy spool.