November 5, 2020, 9:31 PM · Welcome to "For the Record," Violinist.com's weekly roundup of new releases of recordings by violinists, violists, cellists and other classical musicians. We hope it helps you keep track of your favorite artists, as well as find some new ones to add to your listening! 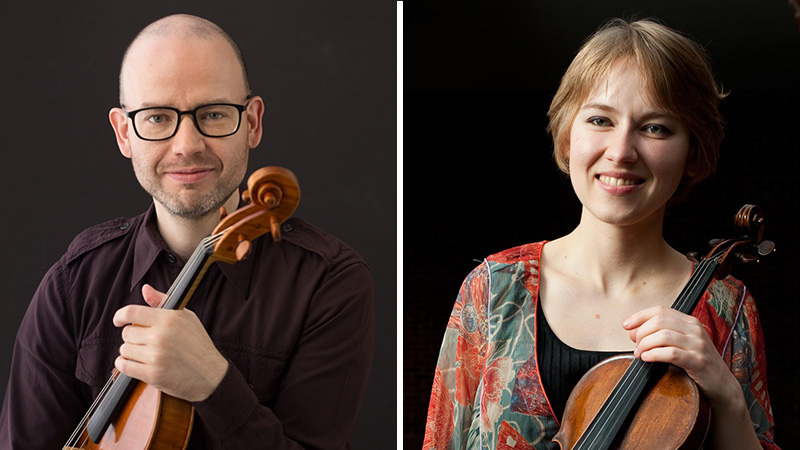 "Brahms’s Sonatas Op. 120, dating from 1895, are much played and loved in their versions for clarinet and viola. However, the composer’s independent edition of these sonatas for violin has been neglected by violinists and remained out of print for over a century, until 2016," said London-based violinist Jenna Sherry. "Although they were played by violinist Marie Soldat-Roeger and also by Joseph Joachim, who otherwise shunned transcriptions, should we really call these ‘violin sonatas,’ or, rather, loving transcriptions of works originally imagined for clarinet? The challenge of navigating between the three instrumental identities, each with its distinct voice, became an essential part of the rehearsal process (instruments were borrowed, friends consulted), and a source of constant inspiration." This is a debut recording for Sherry, who also is founder and artistic director of the Birdfoot Festival, a chamber music festival in her native New Orleans. BELOW: The recording also contains Erno Dohnányi's Sonata for violin and piano, Op. 21:

Dutch composer Jaap Nico Hamburger is the son of Holocaust survivor Jannie Moffie-Bolle, whose autobiography “Een hemel zonder vogels” (A sky without birds) details her experiences as a Jewish teenager in wartime. His composition "Children’s War Diaries" was inspired by a visit to Children’s Memorial in Jerusalem and premiered in November 2019 by the Orchestre Métropolitain de Montréal in a performance which also featured several of the Violins of Hope, marking their first visit to Canada. The biography of composer György Ligeti inspired Chamber Symphony No. 1 “Remember to Forget,” which evokes the sounds of the train in which Ligeti hid under a mailbag to escape communist oppression en route to Vienna. "Remember to Forget" reminds the listener that it is possible to thrive through adversity and suffering. BELOW: Hamburger's Chamber Symphony No. 1 "Remember to Forget": I. Andante

November 6, 2020 at 04:00 PM · I don't like it when violinists "steal" sonatas from violists (or clarinetists). After all there are thousands of violin sonatas to choose from and a far smaller number of viola sonatas. Let them own them.