October 15, 2020, 3:44 PM · Welcome to "For the Record," Violinist.com's weekly roundup of new releases of recordings by violinists, violists, cellists and other classical musicians. We hope it helps you keep track of your favorite artists, as well as find some new ones to add to your listening! 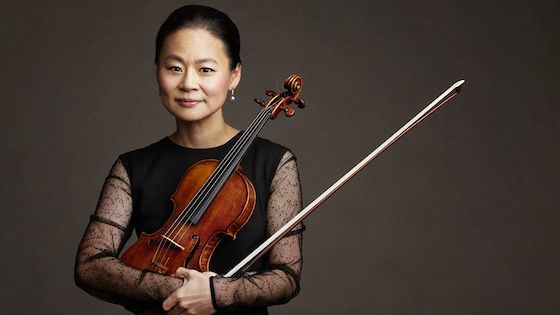 Violinist Midori, who has been a celebrated performer for more than 35 years, marks Beethoven’s 250th birthday this December with a new recording of Beethoven’s Violin Concerto, complemented by his two Romances for violin and orchestra. Midori plays with the Lucerne Festival Strings in a recording made in Switzerland shortly after the COVID-19 pandemic had caused the cancellation of a planned concert performance and international tour. "Beethoven guided my colleagues and me, his work focusing and inspiring us, our concentrations heightened, enveloped together in our musical efforts," Midori said. "I am reminded that he was a man of strong beliefs and a morality to which he fully committed, as an activist who took firm stands on many major issues of his day. At the same time, he maintained the discipline that allowed him to create profoundly beautiful, often serene music, despite his many personal disappointments and struggles." BELOW: Conductor David Dodds speaks about working with Midori.

This album includes five orchestral works recorded live by the BBC Symphony Orchestra, including: "The Seamstress" (2014-2015), led by Sakari Oramo, featuring violinist Jennifer Koh performing live with a recorded recitation by vocalist Irene Buckley; "Masquerade" (2013) led by Marin Alsop; "This Midnight Hour" (2015) led by Oramo; "Night Ferry" (2012) led by Andrew Litton; and "rewind" (2005-2006) led by André de Ridder. "The Seamstress" is one of a number of works Clyne wrote for violin in the wake of personal loss. It was commissioned by the Chicago Symphony Orchestra and pairs an acrobatic violin solo part with a whispered voice that recites William Butler Yeats’ poem, "A Coat." The imaginary, one-act ballet alludes to folk fiddle traditions and is built on a twelve-tone row, a rare device for Clyne. BELOW: a short clip from "The Seamstress":

Celebrating its 10th anniversary, the U.K.-based Ligeti Quartet has created an album of works by British composer Christian Mason, whose compositions explore how the acoustic properties of the string quartet emulate the human voice through the use of extended techniques and unique sound-worlds. The album features two projects, one inspired by the Tuvan vocal tradition of Khöömii and one by the practice of the Tenores in Sardinia. BELOW: The Ligeti Quartet performs a track from the album, "Dyngylday":