How Orchestras Are Offering Live Concerts During Canceled Seasons

October 13, 2020, 11:44 PM · How can performing artists and organizations continue to connect with their audiences and supporters, when COVID limitations continue to preclude in-person concerts for the foreseeable future? 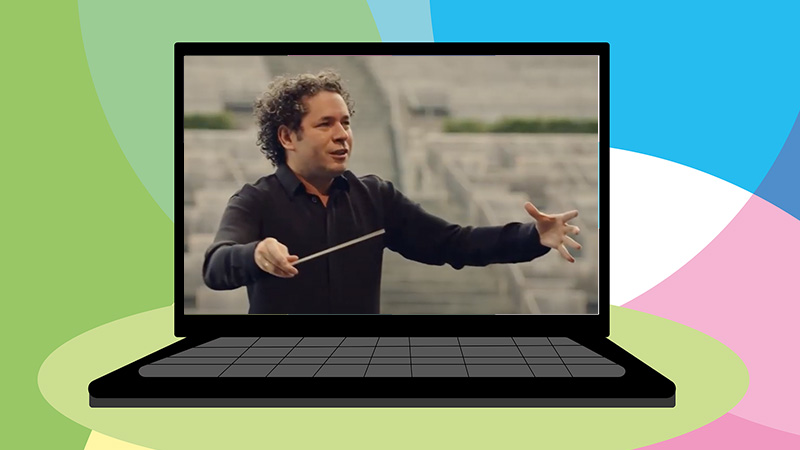 A common solution has been to livestream performances, but doing that can take an organization down many paths. Do you use the Internet's global reach to expand your geographic focus? Or do you stick with your local market? And how do you price access? Do you make streams free to broaden your reach? And if you choose to charge, how do you price that? Do you sell access on a concert-by-concert basis or focus on subscription sales? Or do you use live streams as a way to encourage higher-priced donations?

I hope that this can help everyone share ideas and come up with solutions for their own situations. Also, please share your experiences in the comments — how is your local orchestra or arts organization adapting?

I'd like to start with an orchestra close to my home and to my heart, the Pasadena Symphony, a longtime regional orchestra where I often play in the violin section. In order to keep their connection with their community of subscribers and donors, the Pasadena Symphony came up with a downsized concert series adapted for COVID-19. They started the planning process in the summer, and their first concert, featuring violinist Simone Porter, will happen this Saturday. For their four scheduled fall concerts, they'll feature a soloist as well as a small number of orchestra musicians performing chamber works. While they had clearly hoped to be able to offer some kind of in-person option for viewing, that is not possible yet under California rules. So they will livestream the performance from the orchestra's usual venue, the Ambassador Auditorium. The concert will happen at 8 p.m. on the scheduled day and then be available for members to stream any time afterwards. How are they handling tickets and payment? They are selling memberships, and for a minimum donation of $100, members will have access to all four of the fall concerts.

Looking at the big picture, the Pasadena Symphony's model seems like a good way to remain connected with its established community of supporters and concert-goers, allowing the organization to continue collecting the revenue it needs and still presenting music to the community. The focus has been fairly local, but I think that is appropriate. Sure, they might get some out-of-area supporters, but the idea is to survive this downturn and live to give the larger concerts another day. Yes, this will employ only a few of the orchestra musicians, but at least it does do that, and it sustains the connection between artists and audiences. The ticket-selling model is a great idea, IMO, as $25 per stream (which obviously could be shared by a household) is quite reasonable, but it does allow for larger donations by those who can help sustain the orchestra through this. The assumption here is that the symphony's supporters want to continue supporting the organization in the way that they can.

Violinist Vadim Gluzman and pianist Angela Yoffe have been running the North Shore Chamber Music Festival in Chicago for 10 years, and their response to COVID cancellations was to create a series of combination in-person and livestream concerts, following guidelines for what is permitted currently in Illinois. They've chosen a small venue, PianoForte Chicago, with concerts that feature a half-dozen or less musicians. For the live portion, they have to follow strict protocols, permitting 35-40 people in a space that can seat up to 100 under normal circumstances to allow for distancing, and requiring masks. The very limited in-person tickets are $70, with $20 livestream tickets. Those with livestream tickets can watch the concert up to 48 hours after the performance is streamed.

Again, they have cultivated concert-going community over many years, and they are marketing both to that community and the larger communities that Gluzman, Quint and others have cultivated worldwide. Planning in-person concerts right now in the U.S. certainly carries its risks; if cases increase and rules change, the in-person portion of the concert might be at risk. But having the livestream helps hedge against that outcome - even if the in-person portion is canceled at the last minute, the show will go on as planned, online.

Let's look at a larger organization: the Los Angeles Philharmonic. When it comes to subscription concerts, everything in Disney Hall has been canceled through the end of 2020 at this point, and the LA Phil is moving 2020/21 subscription packages into the 2021/22 season.

When it comes to creating new content, in August the LA Phil resumed some limited live performances, for a video series that they started releasing in late September called Sound/Stage. The musicians are masked and distanced, with wind and the brass players sitting behind custom-built Plexiglas enclosures, and they are playing outdoors at an empty Hollywood Bowl, with as many as 30-some musicians on stage. The concerts were recorded with very high production values (drone shots, cameras all over the stage, high-quality sound and video) and beyond the music they also incorporate interviews, essays, and artwork. The Sound/Stage videos are released on Fridays and then available for free on the LA Phil's website thereafter.

The filmed concerts are absolutely beautiful, and it's wonderful to hear the sound of a (fairly) full orchestra and to see these musicians at work together. (It’s hard to listen to the Ravel Mother Goose excerpt below and keep a dry eye...)

The LA Phil still does show its canceled season posted in full on its website, with "canceled" next to every entry. It's pretty heartbreaking to view in the current moment, but here's hoping the concerts do happen a year from now.

Another organization creating beautiful virtual concerts during the fall is the Santa Fe Symphony which is offering five concerts filmed at some stunning locations during its fall season. Tickets are $20 (though it looks like the first virtual concert is available to stream for free.)

The Chicago Symphony Orchestra completely pivoted to online its fall 2020 season, creating its own CSOtv to broadcast both free and premium
on-demand videos. The premium paid content includes CSO Sessions, which so far includes five episodes featuring CSO musicians. The episodes have been premiering each Thursday in October, with tickets at $15. Free content includes concert performances from the CSO archives, as well as a series of six educational videos for children. In addition, they are featuring radio broadcasts and podcasts.

This is simply very well-organized and presented; if you want to know what I mean, just look at their website. If confusion is barrier to accessing online content, here is an example of an organization that has explained its content in a very straightforward manner.

Idagio, an audio streaming service geared especially to classical music, is offering a series they are calling the Global Concert Hall. There are a number of concerts, including a Gil Shaham recital (Oct. 18); Yo-Yo Ma (Oct. 23). In order to buy a ticket for a concert, you have to be a member of Idagio, which offers free membership, with the option to go to a premium membership for $9.99 a month. Tickets are $9.90 and ticketholders can access the concert for two days following the concert.

A new platform that launched in late summer called Dreamstage has looked promising, with an attractive interface and great lineup that has included artists such as James Ehnes; Gil Shaham and Adele Anthony; Kevin Zhu; Tessa Lark; Grace Park; Paul Huang; Nathan Metzler and more. At the moment, Dreamstage does not list any future classical offerings; hopefully it will fill up soon. The livestream concert I saw was $25, and the performances are strictly live, occurring in real time. If you miss the live concert, there is no option to view it at a later time. This does create a sense of event, but in reality can be difficult, depending on the day and the time zone.

I invite you to share what the orchestra in your city is doing during this time, and/or to share your experiences with giving or watching livestream concerts. How do you feel about the pricing? About the timing? About the quality virtual concerts? How can we best support our local arts organizations and artists, to sustain them through these very difficult times?