October 7, 2020, 1:27 PM · These days it can be a little difficult to smile, but violinist Philippe Quint aims to give us a reason to do so, with his show Charlie Chaplin's Smile, which he'll be livestreaming next week from Chicago, on October 17 and 18, with pianist Marta Aznavoorian, as part of the North Shore Chamber Music Festival.

"As Chaplin once said, 'A day without laughter is a day wasted,'" Quint said to me over the phone last week. "While we don’t have much to laugh about lately, there is always a time for a 'Smile.'" 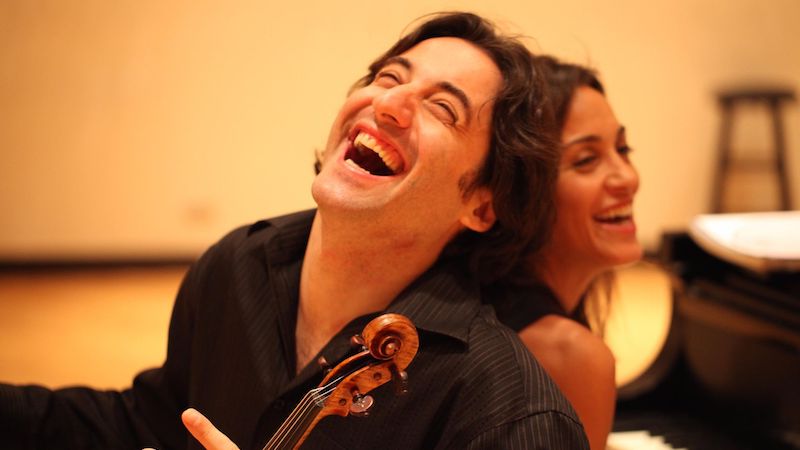 Violinist Philippe Quint and pianist Marta Aznavoorian are all "Smiles" when playing the music of Charlie Chaplin!

Chaplin is best known as the clownish star of silent film, a genre that peaked in the early 20th century -- but he was so much more. "Very few people are aware of his gifts as a composer and the fact that he wrote music to most of his movies," Quint said. In late 2018 Quint released an album called 'Chaplin's Smile,' which features 13 original arrangements for violin and piano of Chaplin's songs. Shortly after that, Quint started working on a multi-media show. "I decided to mix his music with composers that he knew and composers who inspired him. He was very close with Rachmaninov, Schoenberg - he had a lot of great people to guide the process," Quint said. "The show is about Chaplin, his music, and his musical heroes and influences, mixed together with photographs and clips from his films."

I actually saw the "beta" version of Quint's show last year in Los Angeles -- a show that involved live performance, story telling, and even playing with excerpts from Chaplin's silent films showing on the large screen next to Quint and Aznavoorian.

In fact, Quint was scheduled to perform his multi-media Chaplin show with various orchestras throughout 2020, but with the pandemic, "it all came to a halt," Quint said.

As with so many things this year, his show had to be "reimagined" for a virtual performance, but Quint has found the process to be exciting. The livestreams next week are part of the North Shore Chamber Music Festival's onstage/offstage series, a series run by two of Quint's dearest friends, violinist Vadim Gluzman and his wife, pianist Angela Yoffe.

"Vadim and Angela started this lovely festival 10 years ago," Quint said. "This year was supposed to be a big anniversary, when everything came to a halt. Vadim and Angela took it upon themselves to quickly recreate their festival in a different form -- I think now everyone is calling their seasons 'reimagined....' 'recancelled' - is there a word like that?" he laughed.

Quint's performances will take place at PianoForte Chicago, both in-person with distancing protocols, and online, with tickets good for 48 hours after the performance is streamed (for information on concerts and tickets click here).

While the show is rather complex, fortunately "Pianoforte has state-of-the-art equipment and an incredible team," Quint said.

In the end, one of the biggest reasons to "Smile" is simply the fact that the show will go on, and Quint's efforts to bring recognition to Chaplin's unique gifts can continue. That recognition has been well-appreciated by Chaplin’s granddaughter, Kiera Chaplin, who has said: "I think it’s amazing that, 131 years after his birth, my grandfather Charlie Chaplin is still around and loved by so many, that even a 105 years after his first movie was made, he still surprises people. Philippe Quint‘s new show 'Charlie Chaplin’s Smile' is allowing him to be discovered by a whole new audience as a talented composer, a side of him many people did not know.”