October 1, 2020, 2:00 PM · Longtime violin-maker Andrew Carruthers has struck on an idea: that perhaps new violins can be inspired by something other than old violins.

Not that the San Francisco Bay-area luthier has any problem with old violins -- he's studied the great masters and reveres their work. In fact, he's made hundreds of stringed instruments based on Guarneri del Gesùs, Stradivaris, Montaganas and more.

But these days he also has been looking to nature, geometry, architecture for inspiration in his instrument-making.

Specifically, during these pandemic times his creativity was spurred by the Eastern Box Turtle - after which he patterned his most recent creation, the Turtle Fiddle. 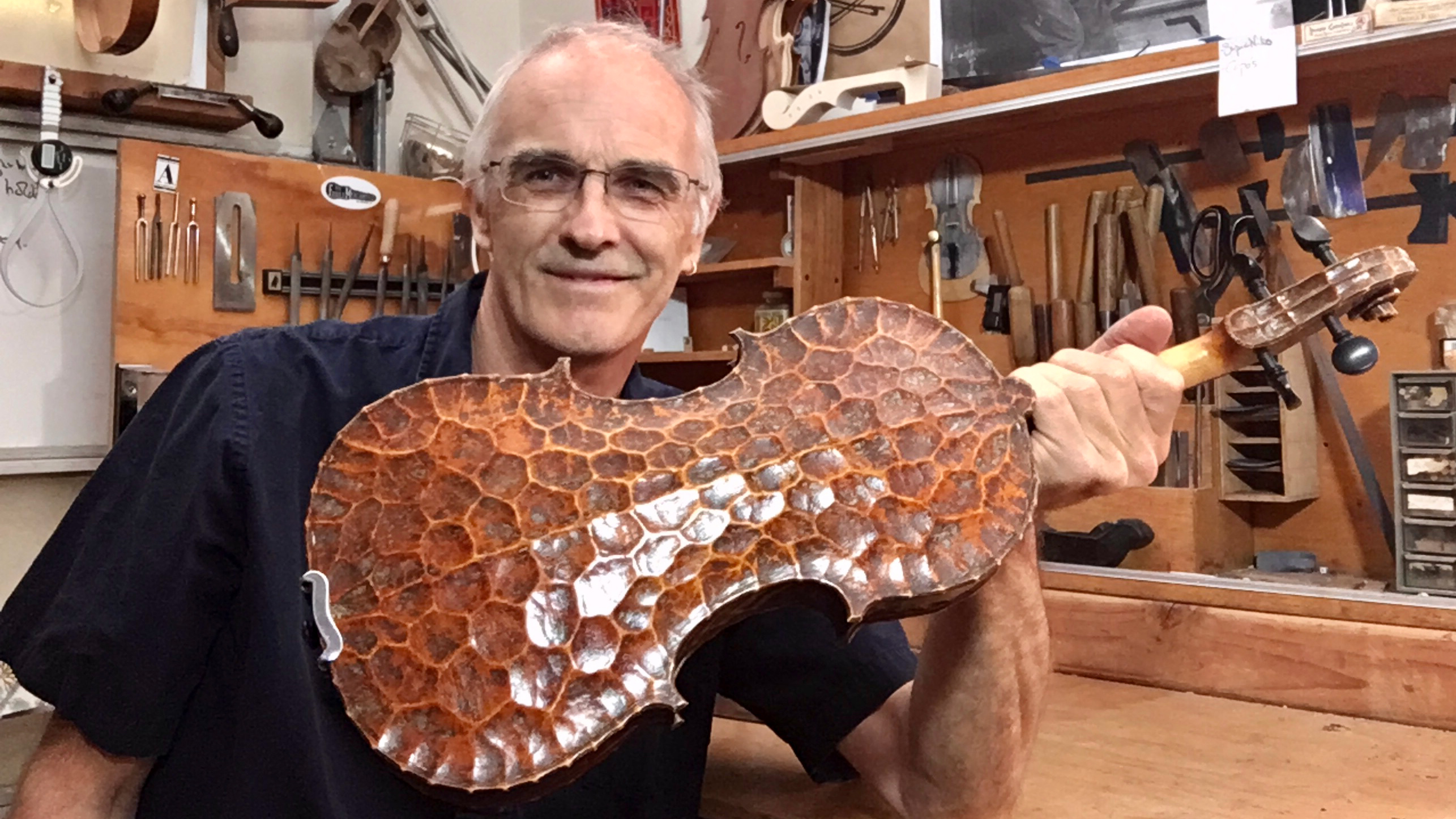 I first met Andrew at the 2014 Violin Society of America Convention in Indianapolis, then again several years later when one his violins was part of a modern violin "taste test" at Metzler Violin Shop in Glendale, Calif. Last week Andrew and I spoke about the ideas and technical considerations that went into the Turtle Fiddle, as well as his life as a luthier.

Laurie: How long have you been making violins, and where did you train for that? How many instruments would you estimate that you have made, over the years?

Andrew: In my early 30s I gave up my job as a research associate at the Lawrence Berkeley National Labs, and I attended the Welsh School of Violin Making. After graduating, I worked at Bein and Fushi in Chicago for three years under cello specialist Russell Wagner. I was developing my repair and restoration skills and seeing a steady flow of great instruments passing through the shop. While I was there, I would come in two hours early every morning and work on building my own instruments before the regular work day began.

In 1994, I moved back west with my young family, first to Tacoma, Wash. for a year, where I had my own shop in the basement; and then a year later, back down to Santa Rosa, in the San Francisco Bay Area, where I’ve been since 1995. For many years I did restorations for violin dealers, and I continued to make my own instruments approximately half time. Since about 2015, with my kids out of college, I’ve given up restoration and have been making my own instruments full time.

Laurie: Have you ever made any non-traditional violins or instruments before? What were they?

Andrew: My first "real" instrument was a redwood-topped guitar that I made while I was working at the labs in Berkeley. I’ve made three guitars, an electric bass, two mandolins, two ukuleles and a tin can fiddle. The most unusual instrument I made was a set of five marimbas to play Zimbabwean ensemble music - based on the traditional mbira music.

Taking excursions into building other instruments always teaches me something, and I believe it improves my violinmaking.

Laurie: What inspired the turtle violin? What touches did you put in there to make it especially turtle-like? Are you normally a fan of reptiles, is this a special interest? Or was it just a sudden inspiration?

Andrew: The Turtle Fiddle comes from some ideas that have been evolving over several years. I’ve been interested in the idea that new violins could be possibly be inspired by something other than old violins. There are very good practical and aesthetic reasons to copy old instruments, but it seems odd to me that most of our creative energy as makers goes into figuring out how to make more and more detailed copies of instruments that were made by a dozen makers who lived 300-400 years ago. It is as if we were to tell musicians that they can only play Bach and nothing else! So I made a viola that featured the interesting gouge work that is part of the process of carving a violin. That gouge work normally gets erased as the violin gets finished, but a modern sculptor might consider leaving in. I called it the Dimpled Viola.

The viola is fairly attractive and very organic-looking. Everyone who looks at it seems to see something different. I saw some things that reminded me of reptiles, so I thought it would be an interesting exercise make something that looked even more reptilian. I’m very interested in all nature, but many reptiles have strong sculptural forms and wonderfully textured and colored outsides that I thought might be easy to evoke with wood and varnish.

The main turtle-like features of the Turtle Fiddle are the formalized, symmetrical cell patterns on the back and top, and the coloring, which I took from an Eastern Box Turtle shell. 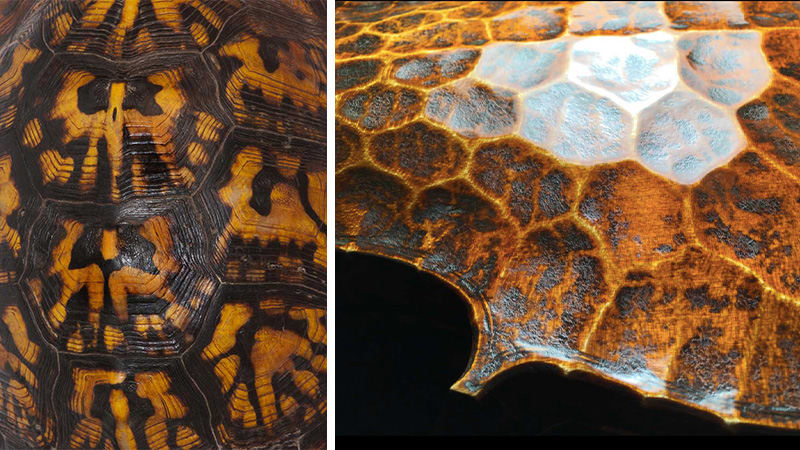 The triple-notched f-holes were taken from Gecko eyes. 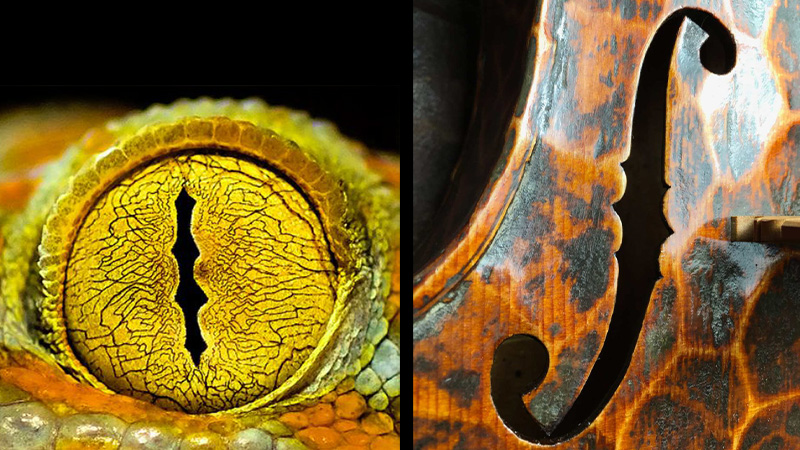 Left: eye of a gecko. Right, F-hole for the Carruthers Turtle Fiddle.

Other things -- like the scalloped plate edge and the faceted scroll -- feel reptile-like, but I couldn’t say exactly where they came from. 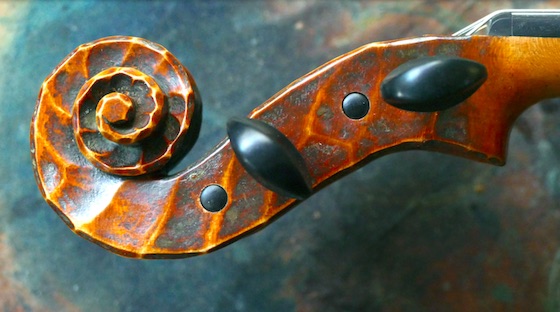 Scroll of the Carruthers Turtle Fiddle.

Laurie: In this instrument, what is the same as a normal violin, and what is different?

Andrew: The turtle violin is way more violin than turtle. I’m pretty sure that some of your readers could name the exact classic violin that it is based on, even under all its camouflage. (I’ll send a sticker to the first correct answer!) It is important to me that the instrument sound and play like a professional-level violin, hence I’ve only pushed the parts that don't affect its function. The things that make it look reptilian are really just decorative add-ons.

It sounds very much like a regular violin, and it feels normal under the bow. From behind a screen, you wouldn’t be able to pick it out from my other violins. I've had it played briefly, but since COVID started I haven't seen many players. If anyone local would like to come by and make some quick, casual comparison recordings, I’d be grateful.

The fact that the turtle violin sounds so normal is actually rather surprising. Many of us religiously copy exact arching and thicknessing patterns of master instruments, hoping to recapture their magical tone. The fact that the Turtle Fiddle sounds good despite its uneven graduations tells me is that the "secrets" of the violin are still far from being unlocked by science, and that intuition is still a strong factor in a successful violin maker. It also tells me that the basic design of the violin is quite robust, and while an instrument may sometimes succeed or fail through a millimeter adjustment somewhere, it is very accommodating in other areas.

Laurie: How long did it take to make? Longer than a normal violin, or no?

Andrew: It took a little longer to build because there were some new problems to solve. Also the carving, which looks pretty casual, is actually fairly controlled. On the other hand, it was such an engaging project that the time just flew by.

Laurie: Is a turtle bow in the works? A turtle T-shirt? I know you have created some really nice violin-related T-shirts and stickers in the past....

Andrew: No bow in the works. It would be fun to see one done, but I don't have the bow-making skills to do a decent job. A turtle violin T-shirt or block print? Yes, I'm just trying to figure out exactly how to render it.

Laurie: How has creating the Turtle Fiddle affected your philosophy of violin-making?

Andrew: This has been a tremendously stimulating project for me. It has been liberating to go from looking inwards and backward, examining old instruments for inspiration; to looking outwards at the world for inspiration. These days when I see something I like, I think, "I wonder how I could use that in a fiddle?" For years, I’ve wanted to get back to "art," and I would love to develop some painting and sculpture skills, but I just haven't had the time. With this format, I can take the skills I’ve learned through violin making and restoration and can use them to help me explore the world.

Andrew: I had thought that after making the Turtle Fiddle I would be able to leave this detour from regular violinmaking. However, this project has created as many new questions as it has answered, so now I’m starting a project where I will see how far I have to push this kind of design to make it affect the tone. I will make two Cellular Fiddles with contrasting structures and see what kind of tonal differences they have. The designs will still have an organic feel but they are more abstract, picking up elements from geometry and architecture, as well as nature.

In case anyone is interested; I haven't quit my day job, I’m still making regular violins, violas and cellos, and I expect their quality to keep improving as I develop my intuitive violin making sense through my experimental projects. Inquiries welcome!

To read more about the Turtle Fiddle, click here for Andrew's blog that talks in detail about its structure and technical aspects.

Next project the Tortoise Double Bass (Prize for guessing which piece of music to play on that).