January 31, 2020, 1:17 PM · Welcome to "For the Record," Violinist.com's weekly roundup of new releases of recordings by violinists, violists, cellists and other classical musicians. We hope it helps you keep track of your favorite artists, as well as find some new ones to add to your listening! 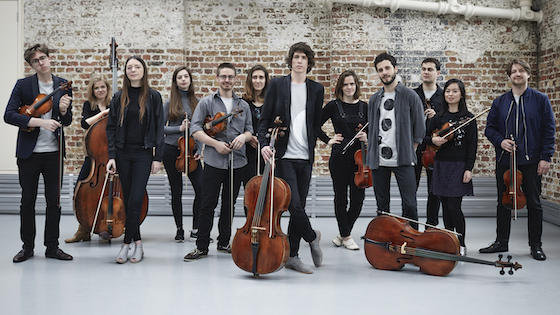 Death and the Maiden
12 Ensemble

Following the critical success of their debut album Resurrection, the U.K.-based 12 ensemble releases an album featuring their own arrangement of Schubert’s string quartet "Death and the Maiden," as well as a new commission from composer Oliver Leith and works by Tavener and Icelandic band Sigur Rós. "Back in 2016, the ensemble was lucky enough to visit Iceland for an artistic residency in the remote eastern fjord town of Seyoisfjorour. Both the sheer natural beauty and elemental power of our surroundings, coupled with the openness and generosity of the people we met, had a deep and lasting effect on us," said 12 Ensemble co-founder Max Ruisi. "In memory of our time there, the ensemble came up with this string arrangement of the song ‘Fljótavík" by Icelandic band Sigur Rós." BELOW: Excerpts from Death and the Maiden:

Vivaldi: Manchester Violin Sonatas
Mark Fewer, violin
Hank Knox, harpsichord
The "Manchester" sonatas of Antonio Vivaldi (1678–1741) are a collection of 12 works brought to light only in 1973. These sonatas changed a great many hands over the centuries. The 12 sonatas, as arranged and recorded by Fewer and Knox last January at Eglise St. Augustin in Mirabel, Quebec, represent a high point of Vivaldi’s chamber music. The violin part offers complex compound melodies while the bass focuses primarily on its harmonic role, with both instruments free to improvise on the written score. BELOW: Excerpts from and interviews about Vivaldi's Manchester Violin Sonatas:

"The Bach Cello Suites have been a part of my life as long as I’ve been playing cello," writes cellist Mike Block. But it was fellow cellist and Silkroad founder Yo-Yo Ma who suggested to the young cellist he should play more Bach. "I wandered around my apartment while practicing it, with the aid of the Block Strap, and repeatedly found myself playing Bach in the bathroom, where the acoustic are so resonant. I eventually started performing Bach in my solo shows." For this album, Block limited himself to two takes for each movement, in order "to stay in the moment" and "play from the gut." Regarding ornamentation and repeats: "ornaments in the Baroque era were often left to the discretion of the player, and embracing this has always felt like a natural opportunity for me to keep this music fresh, even for listeners who know the Suites well. Also, I've chosen not to take repeats in any of the dance movements, as I feel this binds the Suite together as a single musical statement more effectively, and maintains the internal balance of each movement better than the common approach of taking the first repeat, but then not repeating the second section."
BELOW: Mike Block's Bach in the Bathroom, from Strings Sessions Presents:

After moving from Boston to New York City in the summer of 2016, violinist Gabe Terracciano found himself playing less jazz (in the strictest sense), and has since been drawn into the worlds of Traditional Jazz, Bluegrass, Country, Free Improvisation, and Rock. In writing the material for this album, he wanted to make sure that he was able to include all of these genres into the project, finding a way for them to work together while maintaining a common "jazz" identity. The compositions on this album display how many different styles of music can coexist in the same space, especially when brought together by superb players, a willingness to collaborate, and a dedication to the craft of what it means to be a musician. The CD opens with the titular In Flight, a larger scale piece that uses elements of Latin music and free improvisation centered on a clave rhythm in 15/8. The music begins with a slower ensemble introduction followed by violin and trumpet solos over the clave rhythm. Guitar and saxophone then begin to improvise freely while the form collapses around them before a recap of the introduction material. BELOW: Gabe Terracciano's original tune, "Pundit":