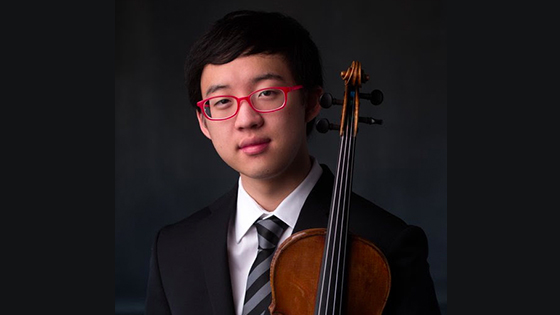 Here is the placement of all the winners:

First Prize winner Rhee studied with Almita and Roland Vamos as a scholarship recipient at the Music Institute of Chicago Academy and is currently pursuing a Bachelor of Music degree with Miriam Fried at the New England Conservatory. He won first prize in the Johansen International Competition,, and he also won the Solo Bach, Commissioned Work and the Elaine H. Klein Prize at the Irving M. Klein International String Competition. In January 2018, he was named a Finalist of the National Young Arts Foundation, and performed at the New World Center in Miami. Subsequently, Rhee appeared at the John F. Kennedy Center as a Presidential Scholar in the Arts, and received his medal at the White House. Rhee has appeared as a soloist with a number of orchestras including the Milwaukee, San Diego Pittsburgh, Eugene Symphonies as well as the San Jose Chamber Orchestra, Wisconsin Philharmonic, and Madison Symphony.

On Saturday and Sunday, the four Finalists performed with the Lynn Philharmonia conducted by Jon Robertson. Watch their performances below, Igor Khukhua and Julian Rhee: