January 24, 2020, 12:06 AM · From the Top, the weekly National Public Radio program that features the voices and talents of young classical musicians, has named pianist Peter Dugan as permanent host, beginning with the 2020-2021 season. 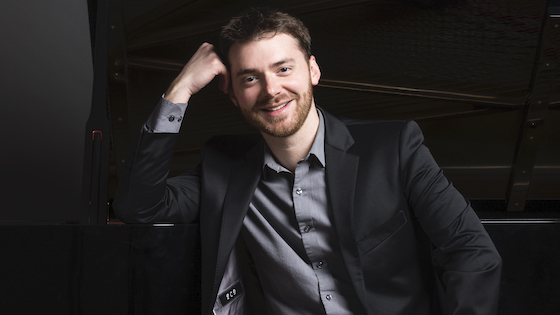 From the Top also has formed a team of co-hosts that includes violinist Vijay Gupta, violinist Tessa Lark, clarinetist Alex Laing, pianist Orli Shaham, and violinist Charles Yang. Gupta, Lark, Laing and Yang will be featured on-air as co-hosts with Peter Dugan, and Shaham will solo guest-host. All will interview and collaborate with the From the Top young musicians. They will also serve as mentors, involved in leadership training, community engagement, and career development programs. As strategic and collaborative partners, their insight and experience will help to inform future development of From the Top.

From the Top was started in 1999 as a radio program to give young classically-trained musicians a national platform and recognition. It was hosted for nearly 20 years by pianist Christopher O'Riley, who both interviewed the young musicians and performed with them. In October 2018 O'Riley's contract was not renewed, and since that time the show has been hosted by guest hosts, including Dugan.

“Being a guest host on From the Top these past two seasons has been incredibly rewarding," Dugan said. "The young musicians inspire me, not just with their dazzling virtuosity, but more importantly, with their sincere artistry and humanity, and their unbridled passion for their craft.

Dugan has a long history with From the Top, having first performed on the show in 2007, when he was 18.

"It meant so much to me to join the From the Top family when I first performed on the show as a teenager," Dugan said. "I’m truly honored and humbled now to step into the role of permanent host and, with the help of our brilliant co-hosts and creatives, to continue From the Top’s tradition of empowering the next generation of great musicians by sharing their music and their stories with listeners across the country.”

Dugan has collaborated with musicians such as violinists Itzhak Perlman, Joshua Bell, Philippe Quint, Charles Yang and soprano Renee Fleming, among many others. He has bachelor’s and master’s degrees from The Juilliard School, where he studied with Matti Raekallio. He live in New York City with his wife, mezzo-soprano Kara Dugan, and serves on the piano faculty at the Juilliard School Evening Division. He's also a Yamaha Artist.

BELOW: Peter Dugan hosts From the Top Episode 366, recorded in the Hollywood Scoring Studio in Los Angeles and featuring six young musicians: