Scenes from the NAMM Show 2020 in Anaheim

January 19, 2020, 3:46 PM · ANAHEIM, Calif. -- It's that time of year for the 2020 NAMM Show, the five-day gathering of the National Association of Music Merchants which attracts some 100,000 people from more than 120 countries and regions to the Anaheim Convention Center, right next to Disneyland. This year, to enhance the experience, Disneyland simultaneously had its huge opening for its new Star Wars ride, Rise of the Resistance -- what, you'd like to park here?

This didn't seem to detract from the huge event, which features hundreds of speakers, panels, performances and a massive showroom floor that focuses mostly on popular music, electronics and gear but still has its attractions for the acoustic string player (and those curious about electrifying the instrument!) I spent the Friday at the show, which runs through today. 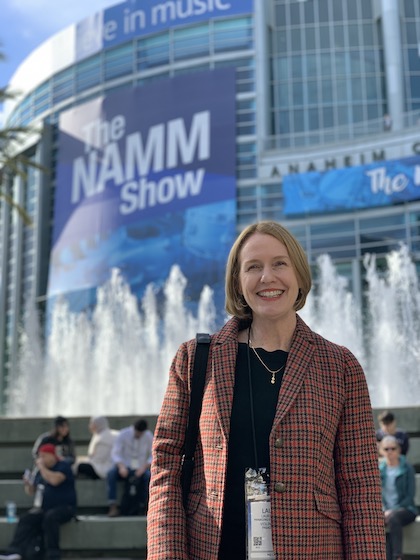 This is my fifth year coming to NAMM, and by now I have some favorite booths I like to visit -- for example, the wall of Taktell metronomes at the Germany-based Wittner. I feel like my young students would definitely practice with their metronome if they had one like any of these! 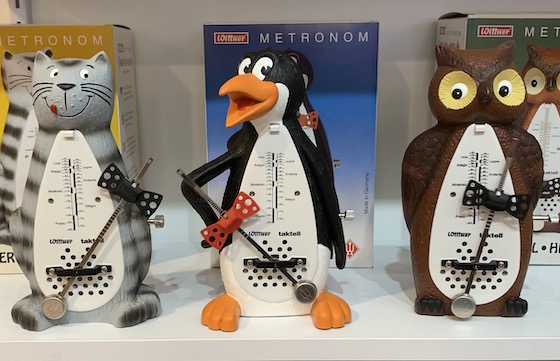 While walking the showroom floor, I was happy to come across my teaching colleague Megan Shung, a wonderfully creative violinist who specializes in many genres. She was demonstrating a removable pickup called the Violin SoundClip from The Realist.

NAMM is the kind of place where you randomly run into old friends, and I was happy to visit the food trucks for lunch (Spanish food!) with long-time Violinist.com member and Los Angeles-based violist Jonah Sirota, who has written some great blogs here about playing viola. He also recently released an album called Strong Sad. 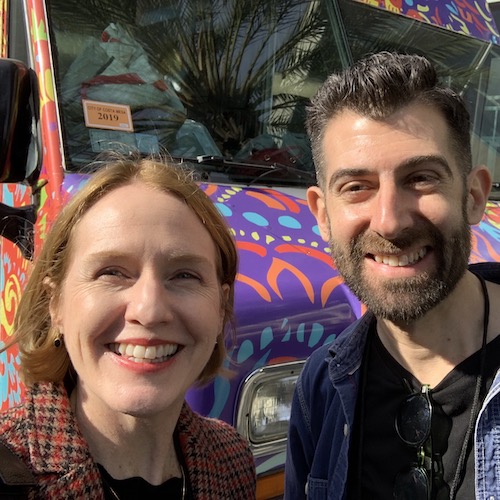 Yamaha had a ton of educational events going on, including a lecture by marketing director Dave Gerhart called "Be Marketable: Combining Performance and Entrepreneurship." It was full of great business advice we can all use -- look in the coming weeks, as I'm going to write a more in-depth story about his lecture. 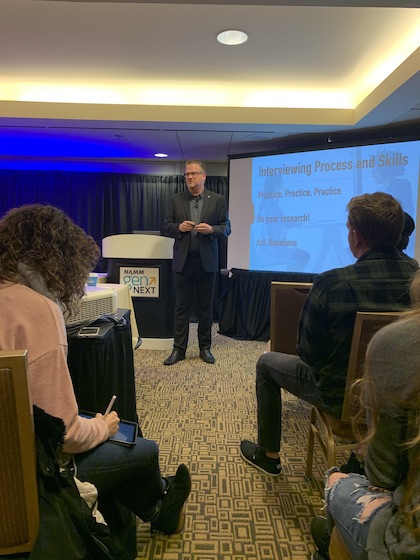 And speaking of Yamaha, over at their showroom at the Marriott, I spoke to Yamaha’s Ken Dattmore about the YVN Mode 3 Violin for students, which really does have some interesting innovations in the way it was made. (Check the video below for his description.) This year at NAMM Yamaha introduced its fractional sizes of this model.

The high-end Leatherwood Bespoke Rosin maker Andrew Baker was in the house, all the way from Australia, and actually we spoke about the fires. Thank goodness, the fires did not burn up to his property, but the smoke was all around. Glad for the rain! 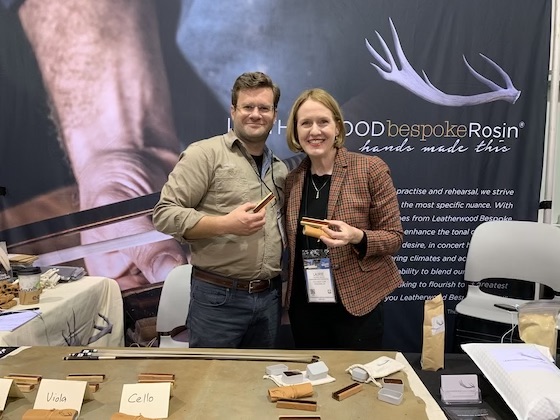 I also visited the folks at Kun Shoulder rests, who were displaying the latest colors for these popular shoulder rests that are collapsible and come in fractional sizes. All colors were picked by young students! 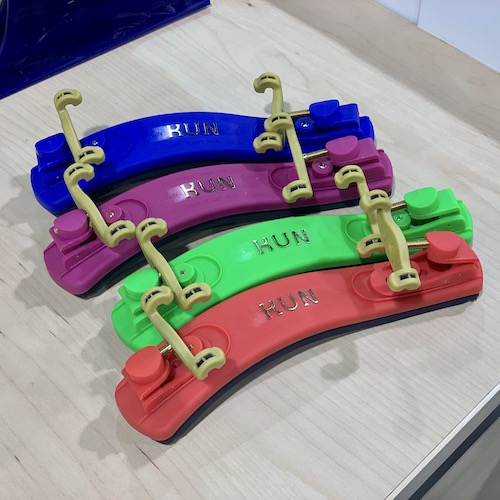 I also stopped in at the Pirastro booth, where they are celebrating the 222nd year of their six-generation, German-based business. In the spring they celebrate 20 years of the Evah Pirazzi string line. Talking strings with Pirastro's Ed Mingo and Annette Müller-Zierach, I also realized that the Evah Gold strings that I like on my violin are related to Obligatos, but the Obligatos are a bit warmer and less loud. As an orchestral player who does not need a "solo sound," and someone who wishes at this point to protect my ears, this sounds good to me. I think I'm going to try the Obligatos for a while! 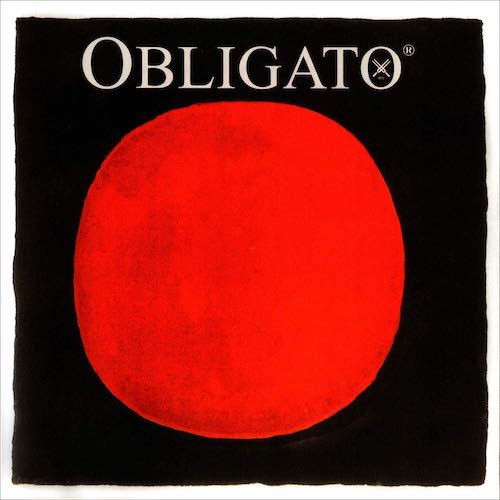 I also enjoyed catching up with fellow journalist Megan Westberg, editor of Strings Magazine. Of course I picked up the latest edition of the magazine, which this month features a historical article on the important violinist Jenö Hubay. 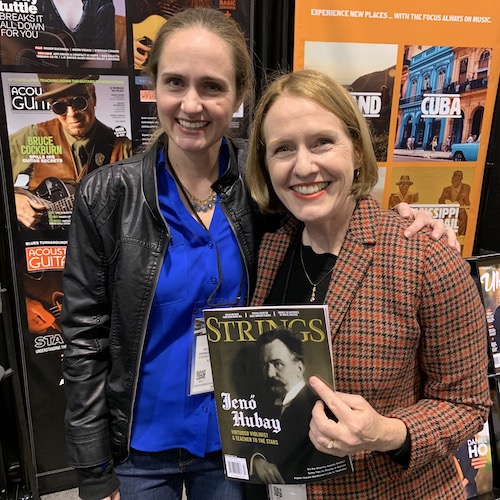 And just as I was leaving, look who I found? The founder of SHAR Music, Charles Avsharian. Of course I needed a selfie -- great to see him in person! 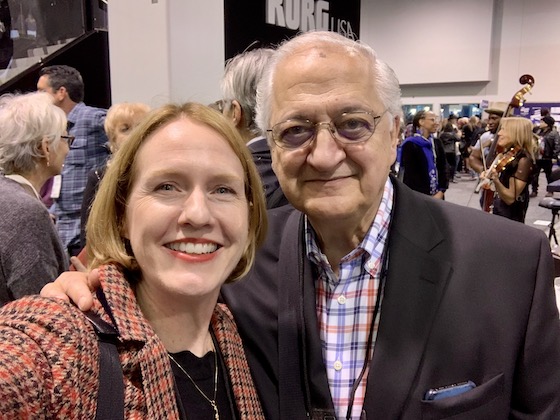 Of course, I couldn't help but do a bit of people-watching; the clothes at NAMM can be so fun, check out this couple's hip garb: 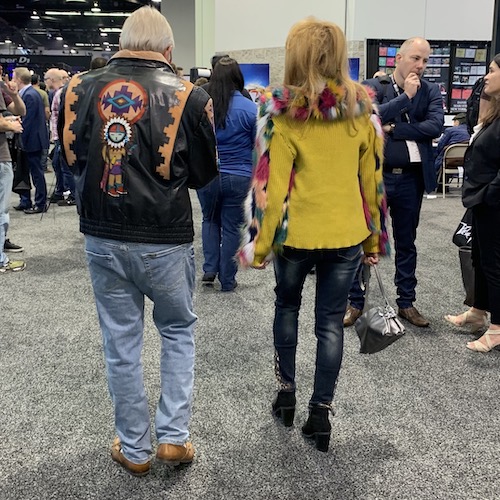 Was anyone else at NAMM? If so, feel free to share your impressions!