January 16, 2020, 11:58 AM · How do you keep dozens of student violins from falling apart, when you run a school strings program or rent to children? And how do you keep your fleet of fiddles in good repair, when accidents and unfortunate incidents inevitably occur?

The exuberant student is what Yamaha had in mind when it developed its YVN Model 3 Violin, a durable violin created with the help of Computer-Assisted Design (CAD). The new violin won a Best in Show award when it was first introduced at last year’s NAMM Show, the music products convention presented by the National Association of Music Merchants. But last year, it came only in a full-size version -- not the smaller fractional-sizes used by younger children. 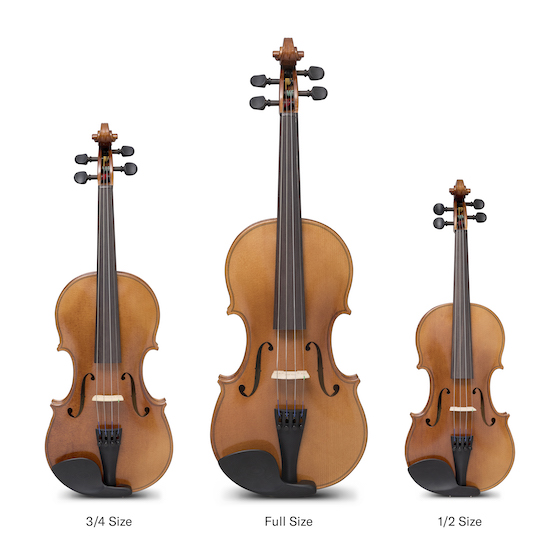 Today, on the first day of the 2020 NAMM Show in Anaheim, Calif., Yamaha introduced its fractional-sized editions of this work-horse violin, specifically 3/4- and 1/2-size, meant for use in school programs and rental pools. Yamaha also introduced its new Silent Bass, an electric upright bass that allows the performer to control the sound from the instrument itself with the press of a button.

When it comes to the student violins, Yamaha put a priority on durability and uniformity, so that the new YVN Model 3 Violins can last for many years and the parts of each instrument can be interchanged, making certain repairs much easier.

"We are expecting a longer lifetime - we have a layering process on the top and back, so there is more resistance to humidity damage. If it's more resistant to humidity changes, there will be less cracking and seams opening," said Ken Dattmore, Marketing Manager for the Strings division at Yamaha Corporation of America. "We wanted to make a violin that was consistent from one instrument to another, so if you played one, then you played five more, all six are identical."

To that end, they used CAD to create a three-ply, pressed wood top and bottom to increase its durability and resistance to humidity change, Dattmore said. The pressing process also uses one-third the amount of wood used in the previous process, which involved more carving and created more waste.

"We wanted something durable, so that the instrument can remain in a rental pool for a longer period of time, which is more profitable for the dealer," Dattmore said. "The same thing goes for school districts. Let's say a district buys 50 violins, but then five years later they have to buy 50 more because the instruments have worn out. Wouldn't it be better if they bought 50 now, and then 10 or 15 years later those instruments were still there because they were still in good shape? Then the school's money could go somewhere other than replacing worn-out instruments."

To create better sound, the top plate of the violin is "graduated," meaning that it undergoes a process of thinning the wood to certain specifications. But instead of a luthier whittling away at the plate, a CAD machine presses the spruce top of each YVN Model 3 violin into an exact duplication of an antique violin top, with the identical graduation.

"The computer-aided design process allows the violins to sound good, and that means consistently good, from instrument to instrument," Dattmore said. With each violin made to identical specifications, "you can move a bridge from one violin to another without having to carve it. That means you can buy replacement bridges from us and not have to have a luthier replace the bridge. If Johnny's bridge gets broken during class, the teacher can just get a replacement bridge from the desk drawer, and Johnny can go ahead and play in the rehearsal."

Will Yamaha use this process to also create violas and cellos with higher durability and uniformity?

"As we move forward there will be additional violin sizes available, and also violas and cellos," Dattmore said. "But we want to get everything perfected in the violin."

The violins go for $835 with wooden bow, or $865 with Glasser bow, and they come with a shaped ABS case, made from thermoplastic, with an aluminum rim. "In the perfect world, the case lasts as long as the violin does," Dattmore said. "The case is meant to protect the instrument. It's going to take a beating but that is what it's meant for, so you don't have to replace all the cases every five years." The new instruments are expected to ship in April 2020.

Also today, Yamaha introduced its SLB300SK Silent Bass, a new model of the Silent Bass with Studio Response Technology (SRT), which allows the instrument to model an acoustic bass played through different high-end acoustic microphones, ranging from the clear, crisp sound of a dynamic microphone, to the well-balanced rich timbre and warm low-frequency emphasis of classic and vintage vacuum-tube microphones. SRT provides performers with control of their sound directly from the instrument.

"You get an instrument that sounds like an acoustic bass plus $15,000 worth of professional high-quality microphones," Dattmore said. "And you can really hear it - artists played these, and they just couldn't believe the sound. It's built into the technology of the instrument, so as a performer is playing, they can push a button and move from one microphone to the next. Each different mic give you a different tone, so musicians can adjust their sound to the piece, or the group, or room they are in."

The SLB300SK can be broken down into an easily transportable “subway friendly” instrument that can be packed into a TSA case without fear of being damaged en route. It also allows the player to take their acoustic sound to places where they may have feared to bring an expensive, classic acoustic instrument, such as an outdoor gig on a hot humid day.