January 1, 2020, 10:52 AM · Superstar violinist Nicola Benedetti intends to give a big boost to music teachers and students across the United Kingdom, starting this weekend with the launch of a series of new workshops called the Benedetti Sessions, as part of her newly-formed Benedetti Foundation. 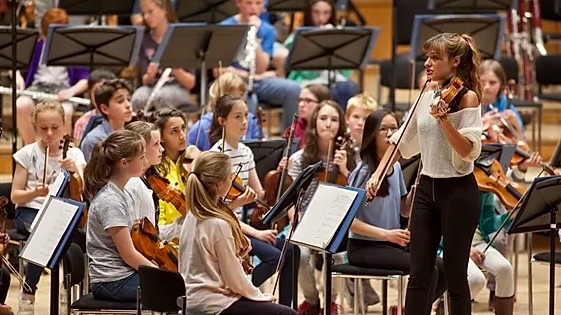 "It's a very natural progression from things I've been doing for a long time," Benedetti told me in a recent phone interview. In fact, Benedetti first started touring schools for educational outreach when she was 15 years old. "I've always wanted to connect on a personal level to those who appreciate the violin, who come to concerts, who study music. I have never had a culture of separation between myself and that world, regardless of people's level at which they're studying or teaching." Benedetti also doesn't wish to limit herself to teaching only the best students at the best conservatory in any given city; she is devoted to music education on all different levels. "For me it's been a very gradual, very multi-faceted devotion and progression over 15 years."

She also has been connected to Sistema Scotland, a charity inspired by Venezuela's El Sistema and aimed at underserved communities, since its inception in 2008. "I reached out when they were founded, and I became a board member and a Big Sister to all of their kids," Benedetti said. In addition to several visits a year, it's also involved "a lot of dialogue with their directors and their teachers on how to ride that very difficult balance of social change and social responsibility through music, addressing the quality of music-making and music-teaching hand-in-hand with those responsibilities."

"I personally believe that any kid from any place understands when they're not doing something that is of a high level. Even if it is just playing open strings, you can do that well, or you can do that badly," Benedetti said. "I've learned so much through my dialogue with the amazing people at Sistema Scotland and I'm still incredibly close with them, and we will continue to work very closely."

To that end, the Benedetti Foundation does not aim to be in competition with existing music education programs; "our aim is to support, shine a light on, and highlight the good work that is being done."

The Benedetti Sessions begin this weekend with a three-day workshop in Glasgow. "Present at that workshop will be every great teacher, music charity, organization, leader -- everybody that we think is showing exemplary work in the world of music education for all," Benedetti said. "We will basically showcase at that workshop."

The full workshops will last for three days each and involve about 300 students and 100 teachers. Besides the full session this weekend in Glasgow, the other full sessions for 2020 are scheduled for London, Dundee, Antrim, Manchester, and Saffron Walden. Students must apply to attend, and they must prepare in advance.

"There will be six (full) workshops in the first year and many more half-sessions," Benedetti said. "The half-days will exist where I'm touring, so for example I'm doing a tour around the U.K. that stops in Birmingham, and we have an extra day after the concert in Birmingham so we will be doing a session.

The sessions are meant to provide an equal boost for teachers as well as students.

"We are fiercely committed to providing meaningful support, extensive information and a sense of uplift, inspiration and respite to as many teachers as possible," Benedetti writes of the Foundation's mission. "Furthermore, we wish to help create a greater culture of public acknowledgement, appreciation and celebration of their work."

Elaborating over the phone, Benedetti said that over her years of working with teachers, she has come across a repeating theme, that the teachers "bemoan the same scenario over and over again of being under-resourced and under-supported," Benedetti said. The teachers also report "feeling isolated, feeling a lack of inspiration, a lack of energy in their field." She hopes that providing this kind of event will allow teachers "to feel like they are coming together with hundreds of other teachers and are collectively learning and sharing ideas." She also wants to help them feel more connected to the professional playing world. "We have professors at conservatoires who are elevated almost to an over-the-top reverence; but then music teachers everywhere outside of that world that prepares young people 'for the profession' -- everybody who sits outside of that is the bottom of the teaching-world pile, which is not a good place to be," she said. "Primary teachers, school teachers, classroom teachers -- they're so often under-supported and under-appreciated. So for me, I'm trying to kind of address that balance, listen to their plight, and provide something positive for them."

As for the curriculum, "there are a few basic concepts that we will address," Benedetti said. One of the big issues for Benedetti is how instrumentalists connect physicality to playing; teaching it in a way that is less mechanical and more holistic.

"We're focused finding the wider lesson that we can embed into this specific work," Benedetti said, "so when it comes to a physical fluidity, freedom, trust, openness, awareness of your internal feeling -- all of these things we will be addressing in the context of technique, posture and physicality."

"One thing we're going to try to avoid is note-learning within the sessions," Benedetti said. "We've devised all kinds of systems to help people prepare thoroughly for the sessions, so that when kids get there, we're focused on purely large objectives, so we can create sonority, sound, communication and expression collectively within these couple of days, without worrying about playing in tune, playing in time."

To that end, Benedetti's team has created an entire Prepare with Nicky page on the Benedetti Foundation website that provides the sheet music as well as links videos from her Youtube channel meant to help student prepare, such as this one:

"We want to help kids prepare incrementally for the sessions, with a kind of three-month lead time," Benedetti said. "If we are scraping away at an instrument, we're coming up against difficulties and hurdles left, right and center, we're basically trying to deal with things that feel entirely disconnected from our creativity or from our expression, and I hate to say that a vast number of people playing studying traditionally classical instruments - they have that experience."

The experience goes something like this: you learn the notes, you learn to play in tune, and then you add something called "musicality." But this sequence misses the primary reason why we make music: for expression, emotion and communication.

"That is integral to absolutely everything you do," Benedetti said, as is having a sense of physical freedom. "If you don't experience an enjoyment through the physicality of playing, sense of freedom and a sense of trust in your hands to go in the right directions, then the question is, why are we playing? This is missing the point of playing. These types of fundamental values can be addressed at every single stage of learning, and on every single level."

So how does one participate in a Benedetti Sessions workshop? Here is the page of current locations, and online applications can be found by paging through this list of workshop possibilities for students and teachers, which include various levels of orchestra, general musicianship, professional development and classroom teaching.

"We're extremely sensitive to the open application process, where a lot of those places go kids with parents who are absolutely on the ball and behind them every step of the way, or go to schools that have excellent music departments that are the first to hear about it and encourage all their kids to sign up," Benedetti said. "We want to serve a portion of those who more fortunate, more supported young people, but we also want to make sure that there is a fair representation and reservation for kids that maybe don't have that level of support and where things pass them by."

"In a place like London that has countless music charities that I've been working with for years, we will automatically provide a small quota for each one of those charities and also make sure that we are extremely active with (Music Hubs in England and Music Service in Scotland). Our intention is to make sure that as broad a representation turns up to these sessions as possible. A portion, about 50 percent, is an open application process, available online so that people can sign up."

Will there be any Benedetti Sessions in America?

"Oh definitely of course!" Benedetti said. "I tour here all the time. So I'm working closely with Charlotte Lee, my manager in America, to make sure that there is a presence in America."