September 29, 2019, 9:52 PM · Welcome to "For the Record," Violinist.com's weekly roundup of new releases of recordings by violinists, violists, cellists and other classical musicians. We hope it helps you keep track of your favorite artists, as well as find some new ones to add to your listening! 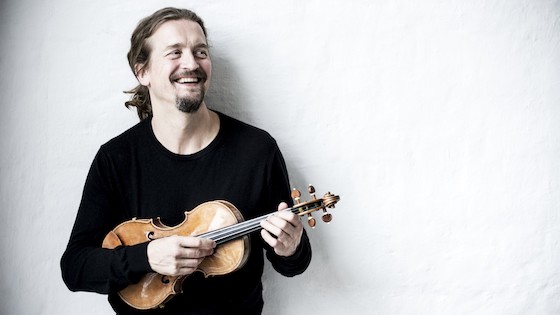 When one of the most respected violinists in the world releases a recording of two major violin concertos, it's time to listen. German violinist Christian Tetzlaff, who teaches at the Kronberg Academy, performs the Beethoven and Sibelius Violin Concertos with Deutsches Symphonie-Orchester Berlin, Robin Ticciati conducting. Tetzlaff also has recorded Bartok's Concertos 1 and 2; Bach's Sonatas and Partitas (several times); and Brahms Violin Sonatas and more. Definitely worth a listen. BELOW: Excerpts and short interview (in German) with Tezlaff:

Cellist Zuill Bailey's new album is a celebration of the 10th anniversary of the Wimbledon International Music Festival, where he has often appeared. It includes performances of the Schumann Cello Concerto and the Brahms Double Concerto with violinist Philippe Quint. BELOW: Cellist Zuill Bailey and violinist Philippe Quint peform the "Andante" from Brahms' Double Concerto in A Minor, Op. 102:

Philharmonix is a multi-genre septet featuring members of the Berlin Philharmonic and Vienna Philharmonic, who arrange their own music for the ensemble- some of it classical, but also many other genres such as Hungarian, swing, pop, klezmer music and more. BELOW: From their Volume 1 album, Philharmonix performs play Russian Overture:

Violinist Pauline Kim Harris's "Heroine" is a melding of ambient and classical music, featuring two new works for violin and electronics – Ambient Chaconne, a reimagining of J.S. Bach’s Chaconne from the Partita in D minor; and Deo, a reimagining of Johannes Ockeghem’s Deo Gratias – both co-composed by Harris and Spencer Topel. BELOW: Ambient Chaconne (After Bach's BWV 1004), I. With violinist Pauline Kim Harris.

The Danish String Quartet's Grammy-nominated Prism project links Bach fugues, late Beethoven quartets and works by modern masters. In volume two of the series, Bach's Fugue in Bb minor from the Well-Tempered Clavier (in the arrangement by Viennese composer Emanuel Aloys Förster) is brought together with Beethoven's String Quartet Op. 130 and Alfred Schnittke's String Quartet No.3 (composed in 1983). As the quartet explains, "A beam of music is split through Beethoven's prism. The important thing to us is that these connections be experienced widely. We hope the listener will join us in the wonder of thee beams of music that travel all the way from Bach through Beethoven to our own times." BELOW: The Danish String Quartet performs Beethoven: String Quartet No. 13 in B-Flat Major, Op. 130 - 2. Presto: