Baltimore Symphony Musicians Back to Work After Reaching 1-year Agreement 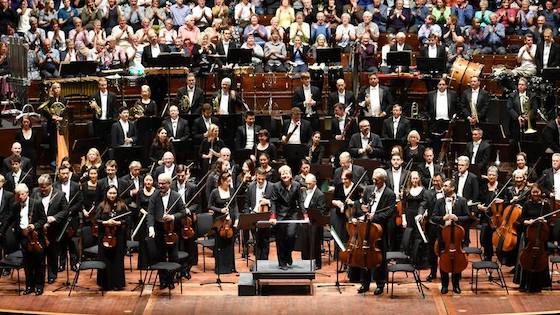 The Baltimore Symphony Orchestra. From their appearance in 2018 at the Edinburgh International Festival in Scotland.

"The Baltimore Symphony Orchestra held a press conference today to announce that management, musicians and board have ratified a contract for the 2019-2020 season," posted the Baltimore Symphony Musicians on their Facebook page. "While we are glad to have come to an agreement, many challenges lie ahead, as Players' Committee Co-Chair Brian Prechtl mentioned in his remarks. The newly-formed Vision Committee, made up of board members, musicians and others will play a vital role in helping the orchestra find a path forward. It is important that musicians' voices be heard in all discussions affecting the status and artistic level of the BSO."

"I’m thrilled that an agreement has been reached and that we will have our musicians back on stage to open our 104th season beginning on Friday night," said Music Director Marin Alsop at the press conference. "The musicians of our Orchestra are a great treasure to our community and this agreement assures that we will continue creating the highest level of music-making together.”

The dispute centered on management's proposal to shorten the orchestra's season from 52 weeks to 40, cutting out the summer concerts -- which for the musicians would mean no summer income.

The new contract provides for a 38-week concert season plus two summer weeks; plus an additional 10 summer weeks to be paid their weekly scale, through "the generosity of special friends of the BSO." It also raises weekly salaries by 2.4 percent, though because of the two-week work stoppage the base pay will be $81,438 this season for 50 weeks, down from $82,794 for 52 weeks under the old contract.

Find more details about the year-long contract on this page.