Milwaukee Concertmaster Frank Almond to Step Down after 2019-20 Season

September 20, 2019, 1:09 PM · Longtime Milwaukee Symphony Orchestra Concertmaster Frank Almond announced on Friday that he will step down after the 2019-20 season. 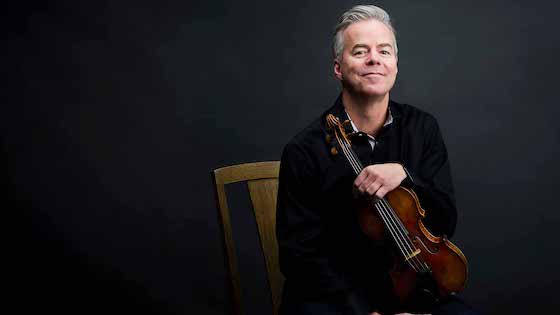 "It has been an honor to have served in this role for the past 25 seasons," Almond wrote in a statement sent to Frankly Music's supporters and friends. "The Milwaukee Symphony is a world class organization and it has been my privilege to serve our city alongside its exceptional musicians, visiting soloists, board of directors, artistic staff, generous patrons and devoted audiences."

"As the Milwaukee Symphony Orchestra takes its next steps forward with a new hall and a new music director, I am humbled that the organization has graciously asked me to stay on as Artistic Advisor, where I will work directly with Maestro Ken-David Masur and others in whatever capacity I can to contribute to the orchestra’s tremendous upward trajectory."

Earlier this month the Milwaukee Symphony officially named Ken-David Masur as its new music director, with a contract running through the 2022-23 season. Masur succceeds Edo de Waart. In September 2020, the orchestra also plans to move into a new facility, to be called the Milwaukee Symphony Center. Its hall will be in the former Warner Grand Theatre, an Art Deco structure currently under renovation.

Frankly Music is the chamber music series that Almond founded in Milwaukee, currently starting its 15th season. "The Frankly Music series and our loyal and devoted audience have been a particular source of joy for me during my tenure in Milwaukee, and I am incredibly grateful that this organization will continue to play a major part in my future plans," Almond said.

In 2014, Almond found himself middle of tense police investigation and at the center of a media circus after he was tased by two robbers as he emerged from a gig and the 1715 "Lipinski" Stradivari that he plays was stolen from him. Over the course of the next nine days, police arrested the thieves and recovered the violin in good condition. Before the robbery, Almond had recorded an homage to the violin, called A Violin's Life, complete with a special educational website to tell the already-remarkable story of the 1715 "Lipinski" Strad. In 2016 he followed up with Violin's Life, Vol. 2.

September 21, 2019 at 01:19 PM · Milwaukee is a great orchestra but they were still lucky to have a violinist of Almond's caliber in the driver's seat.

It is difficult to watch Major Chess Board Pieces being moved about. Frank Almond, the longtime 'King', aka, Concertmaster, of the Milwaukee Symphony Orchestra, so musically gracious under former Music Director, Edo de Waart, & all Conductors during Almond's "Reign", IMO, should be honoured with the creation by The Milwaukee Symphony Orchestra Board of Directors, in establishing "The Frank Almond Concertmaster Chair"!!!! Let's hear it, Milwaukee, Loudly & Clearly, on this Violinist.com website, that you folks just North of Chicago, will set about making my suggestion a Reality!! The International Violin 'Kingdom' knows of Frank Almond's artistry +unwavering commitment to the Milwaukee Symphony and All of Milwaukee whether the citizen's be symphony goer's or not!!!

I wholeheartedly agree with all of Paul Deck's words set down just above regarding a Classical Music Chessboard King, the Honourable Frank Almond! It's a lovely gesture to invite Frank Almond to serve in an Artistic Advisory position, yet now is the *time to let those highest decision makers within Milwaukee's Symphony Orchestra Administrative 'Court' know that they can further salute a truly rare Servant of the Violin and of Classical Music!! I'll even go so far as to coin a new version of a famous Milwaukee associated phrase ~

"Frank Almond! 'The Concertmaster who made Milwaukee's Symphony Orchestra Famous'"!!!!

Very saddened to know this is your last season, but forever grateful you have been a shining Star just North for all of us ~