September 13, 2019, 3:50 PM · When he practices these days, violinist Stephen Waarts thinks a lot about his mentor, the great violinist Aaron Rosand. 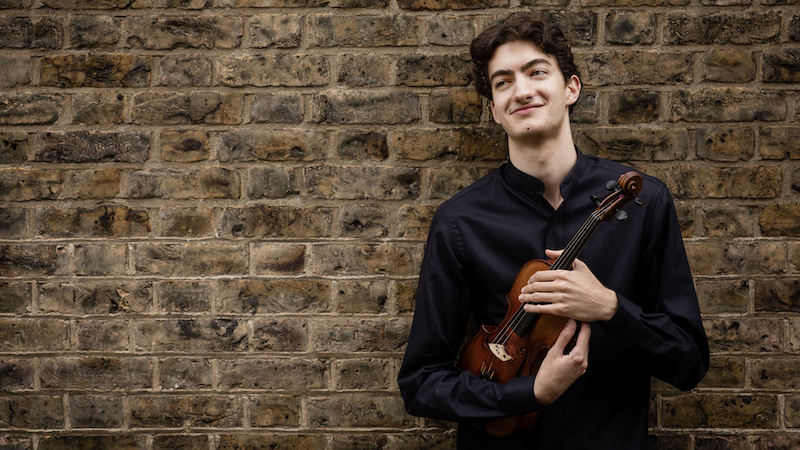 Rosand, who died in July, certainly would have taken pride in the fact that Waarts will take the stage Tuesday for his debut recital at London's Wigmore Hall. Waarts and pianist Gabriele Carcano will perform works by Fauré, Szymanowski and Bartók.

"Mr. Rosand was very interested in what his students were up to, and very proud of us," Waarts told me over the phone last month. "He wanted to be involved, even after his students stopped studying with him."

Waarts, 23, currently studies with Mihaela Martin at the Kronberg Academy in Frankfurt. But he had remained in touch with Rosand up until his death. Waarts was just 15 when he started with Rosand, who was 84 at the time. He studied with Rosand for five years at Philadelphia's Curtis Institute, where he earned his bachelor's degree.

"He had this connection with the past," Waarts said. "He would tell stories, about hearing concerts 50 years ago of Joseph Szigeti or Jascha Heifetz, or about his own experience as a soloist performing across Europe."

A native of Fremont, Calif. (near San Francisco), Waarts started playing the violin at age 5. By age seven he was playing the Kabalevsky Concerto at his first competition, and he's had a long string of successes since then: winning the Young Concert Artists International Auditions in New York at age 17; winning first prize in the 2014 Menuhin Competition; placing fifth and winning all the audience prizes in the 2015 Queen Elisabeth Competition; and receiving an Avery Fisher Career Grant in 2017. Waarts plays on a 1868 Vuillaume.

Last December Waarts released his first recording, Schumann & Bartók: Violin Sonatas No.1. For that recording he worked with pianist Gabriele Carcano, who also will perform with him in next week's recital at Wigmore. They met in 2015 at a festival in Poland called Krzyzowa-Music. When Waarts moved to Europe the following year to go to Kronberg, he re-connected with Carcano.

"For me, it's very important that a pianist can bring his own ideas and be an equal partner to the violinist," Waarts said. When he needed to find a pianist in Europe, he immediately thought of Carcano. "I was coming from a starting point of wanting someone who was a great solo pianist, a great musician in general. I didn't want someone who was just very good at following and accommodating me. I wanted someone who would inspire me. I feel that sometimes we bring very different things to the music, and that can be a very interesting combination."

Recording the Schumann and Bartók sonatas proved to be an intense experience, especially since it was Waart's first recording.

"In a way, it's much less nerve-wracking than a live performance," Waarts said. If something goes wrong, you can always do it over again. But there are other challenges. For example, one take might go perfectly for the violinist, but not the pianist - or the other way around. "So in the recording process, you always want to be 'on,' because you don't know which take will be best for the recording. You want to give them as many options as possible."

"The danger that I wasn't exactly prepared for beforehand is that it will be 'perfect,' but not very interesting," Waarts said. When it comes to the producers, they're most worried about getting everything together, everything in tune, everything technically perfect for the recording. "But when you play things over and over, and you start from different places in the piece, it's hard to keep the sense of a bigger picture and to make everything as special, musically. That's the challenge -- because you don't have the sort of inspiration that you get from a live performance, or even from a competition."

"Bartók is my favorite 20th-century composer," Waarts said. "I think he continues the line of the greatest composers, from Bach, Beethoven and Brahms." While the music of Bartók is played fairly frequently, his violin sonatas aren't as programmed as much as his other works. "They are quite difficult ensemble-wise, and they are kind of difficult to learn." That's exactly why Waarts enjoys performing them. "Personally I love Bartók's music. Whenever you work on it, there is always a lot left to discover. It's so complex, but so logical. It has this wonderful juxtaposition of folk material -- kind of simple, not overtly complicated writing -- combined with his own musical complexity and counterpoint. That combination is incredible."

In Tuesday's recital Waarts and Carcano also will play Szymanowski's "Mythes" - another piece that is not frequently programmed. Once again, Waarts was thinking about Rosand, when he programmed that work. "Mr. Rosand was always against recital programs that were only sonatas; he always wanted to have encore pieces or showpieces," Waarts said. But "showpieces can sometimes be too fluffy or one-note for me. I like pieces that are not sonatas but are very complex and not only about virtuosity. The Szymanowski 'Mythes' are a great example." The three-piece cycle describes three different Greek myths. "It's a great piece."

And as he always does, Waarts will play his recital from memory, something Rosand also advocated. "In my case it's not because of Mr. Rosand, though," Waart said. "I was actually always taught to play that way, even before I studied with him. I wouldn't say that just because you memorize something then you can perform it better. But for me, I always felt much more comfortable. If I knew the piece by memory, and I was secure enough on it, I felt much more comfortable not having the music. But I think it's very personal."

...and here is a more recent video, a trailer for Waarts' recording with Carcano:

September 14, 2019 at 12:19 PM · Great interview with a great violinist. I see he still "takes lessons." I would have been curious to know what his teacher "assigns" him -- repertoire? scales? Dont and Kreutzer?