I admit that's where my mind went when violinist Paul Huang informed me that he would be coming to Los Angeles to play Lera Auerbach's 24 Preludes For Violin And Piano, Op. 46 with Camerata Pacifica. (The concerts are Sept. 8, 10 and 12, click here for more information). 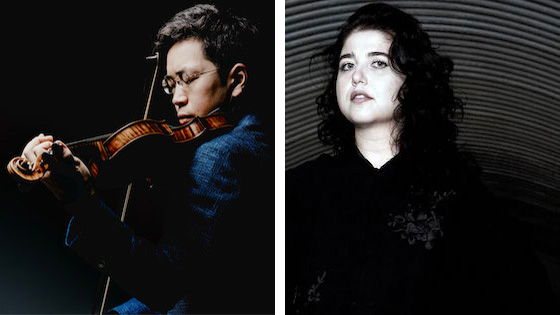 Of course, when someone writes "24 Preludes," the more relevant work is more likely Johann Sebastian Bach's "The Well-Tempered Clavier," the 24 Preludes and Fugues. Clearly one of Bach's central ideas was to explore all 24 major and minor keys, which was not the case in Paganini. Bach's work inspired other "24 Preludes," along the same lines; for example: Frédéric Chopin's 24 Preludes, Op. 28; and Dmitri Shostakovich's Preludes, Op. 34, written for piano and then later arranged for violin and piano. These piano works seem to be more Auerbach's inspiration for her 24 Preludes for Violin and Piano, which also explore every key (in her unique way of viewing keys), in circle-of-fifths order.

Auerbach has an excellent champion in Huang, who made headlines in June, when he stepped in for violinist Anne-Sophie Mutter to play Mozart’s Violin Concerto No. 4 with Chamber Orchestra Vienna-Berlin Bravo!Vail Music Festival. He is a recipient of a 2015 Avery Fisher Career Grant as well as the 2017 Lincoln Center Award for Emerging Artist.

Huang told me that he first encountered Auerbach's violin preludes in 2017.

"I immediately fell in love with the sound world that Lera portrayed in these 24 miniature pieces," said Huang. "Ever since, I have programed some preludes in my recital program. Finally this time I'll be performing in its entirety, lasting about 50 minutes. I am looking forward to this journey."

In 2018, I heard the premiere of her 24 Preludes for Viola and Piano, also at a Camerata Pacifica concert, featuring Auerbach herself at the piano and Richard O'Neill playing viola. Those also explored all the keys, but she put the viola works in the context of travel, each prelude depicting a different place.

The 24 Preludes for Violin and Piano were written well before that, in 1999, then revised in 2003, the year they were recorded by violinist Vadim Gluzman and pianist Angela Yoffe.

BELOW: Here's just one of the violin preludes; violinist Daniel Hope and pianist Jacques Ammon perform Prelude No. 8:

Huang will perform the preludes with pianist Gilles Vonsattel; and then the other half of the program will feature cellist Ani Aznavoorian as well for Beethoven Piano Trio in B-flat Major, Op. 97, "Archduke."

We all know Beethoven, but what can the listener expect from the Auerbach preludes?

"As it is, the 24 preludes is a collection of miniature pieces, some of them lasting less than one minute, but each and every one of them has its own distinct voices and character," Huang said. "In some ways I have the sense that Lera was paying homage to Shostakovich's 24 Preludes for Violin and Piano. Each prelude stands on its own, but at the same time, Lera somehow connects all of them into one big picture. I think that's the magic of this work. Some preludes are energetic, exuberant, some are sarcastic, and many of them are dark and airy. In the middle of the work, one will hear this dream-like lullaby coming out of nowhere from a previously chaotic prelude. This very same lullaby will be heard once again at the very end of the 24th prelude."

Are these preludes difficult to play?

"Some preludes are more challenging than the others, but more importantly, I think the emotional journey that the performers are required to pace from the beginning to the end is a challenge," Huang said. "Finding the right balance of sustaining the intensity and the thread but giving space to breath along the way is tricky." (The music for Auerbach's preludes can be bought online.)

When it comes to Camerata Pacifica, the group has a long-standing relationship with Auerbach in terms of commissions. Besides the 24 Preludes for Viola and Piano, Auerbach also wrote a solo cello and chamber ensemble piece called Dreammusik, which was premiered in 2014 by Camerata Pacifica's principal cellist Ani Aznavoorian. Aznavoorian also recorded the 24 Preludes for Cello and Piano with the with the composer at the piano.

"So bringing the 24 Violin Preludes in the 30th anniversary season opening night in many ways completes this string set of Lera's 24 preludes project," Huang said.

Click here for more information about the concerts this week.

September 7, 2019 at 12:23 PM · Well that is going to be one hell of a show. Paul Huang is amazing. If anyone needs a taste of his playing, look on YouTube for his performance of the Saint-Saens sonata.

I'm glad Auerbach was inspired by the various sets of piano preludes rather than the Paganini caprices. The ratio of musical content between the Chopin Preludes and the Paganini Caprices is somewhere between 10 and 100.