September 3, 2019, 3:25 PM · Violinist Hilary Hahn announced on Sunday via social media that she will be taking a year-long sabbatical from performing.

"Last night, I played a concert in Germany with my friends German Chamber Philharmonic Bremen. And then, when I woke this morning, just like that, this thing I’ve been planning for a decade had begun," Hahn said on her Instagram page. "It’s super nice and intriguing to begin this stretch of luxurious time, and it’s simultaneously a little intimidating. I love performing, touring, and making music with my colleagues. I’ll miss that for a while. But I love other things too, and I’m curious what it’s like to see Autumn, Winter, Spring, and Summer pass in steady succession." 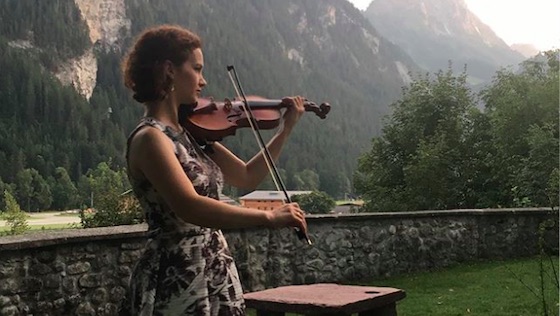 Violinist Hilary Hahn. Photo from @violincase.
"In recent weeks, I’ve been thinking back on the 2018-19 concert season, my Bach-focus year," she said. "So much has happened in a relatively short time! I released two solo albums (Bach and García Abril), was artist in residence at Radio France, toured the world with solo recitals, played chamber music and a wide range of concertos, performed on four continents, and completed two rounds of #100daysofpractice. And that’s just the tip of the iceberg. It’s been intense, busy, and really, really fulfilling. I’m ready to step back and take it all in, sleep, get into a routine, spend time with people I haven’t been around lately, and rediscover myself. Maybe I’ll knit a sweater. Who knows."

"People have asked me what I’ve planned for this coming year. I have no plans! The best way for me to find out what this sabbatical is meant to be is to start it and see where it wants to take me. I didn’t do anything particularly adventurous on my last one, six months in 2009, but none of it was what I’d predicted beforehand. Yet it was life changing. For this sabbatical, I’ve declined all outward facing work, but I have prepared some materials to post from time to time if I check in. And I’ve got a full, exciting season planned for 2020-21, so I’ll definitely see you then.
To all of you out there, you are phenomenal fans. I am grateful for you."

I highly recommend the knitting. Wishing Hilary and her family all the best in the coming year!

LOL maybe she needs a year to switch to viola.

September 3, 2019 at 11:51 PM · Hilary Hahn is following in the footsteps of Iconic Pianist, Vladimir Horowitz, who was known to take several numerous extended in length Sabbatical's throughout his over 68 Year Internationally acclaimed Concert Performing and Recording Career ~

occurring just after the Bolshevik Revolution in 'Mother Russia' & then fleeing w/his 'musical brother', my to-later-become Star Violin Mentor, Nathan Milstein, to Berlin, & eventually to Paris, where The Name of Vladimir Horowitz became so Known he was acclaimed as Horowitz for the largest term of his fabled Concert Career ~

A Sabbatical is a great opportunity to Just Be, and to explore much more in this Life which can not fail to help and contribute greatly to growth of any Artist with non stop demands of yearly touring & all this entails ...

If Hilary Hahn knits a sweater, it's sure to be unique with every stitch in perfect place!!

September 4, 2019 at 12:12 AM · Paul is right; this will be her year to take up vla. Many of the great violinists were/are great violists, so this scenario would make sense, assuming, of course that she does not already play vla.

Taking a year makes sense. She has two kids, if I recall correctly, and they can probably use more attention. But bless her for not being so caught up in the fame that she cannot find time to step back and take a rest from it.

September 4, 2019 at 03:53 AM · We could have a Weekend Vote: Will Hilary still make with videos with TwoSet Violin during her sabbatical? Yes/No

September 4, 2019 at 05:50 AM · We can still enjoy your brilliant playing through utube. Meanwhile enjoy your time out and come back with new energy.

September 4, 2019 at 05:09 PM · Good. She can spend the time preparing to make the Ysaye recording the world desperately needs.

Thank you for just giving me a 'Mrs.' in front of my maiden name!!! My parents were Matesky's, & I suspect Ms Hilary Hahn has another name she may wish private ~ You are truly polite to address women musician's as either a Ms or Mrs ~ Again, many thank you's for your kind & respectful courtesy ~

Unaware of Mr. Heifetz's sabbatical in 1958, I'll check it with a Family member to verify the year ~ I only mentioned Vladimir Horowitz, due to publicly known facts of Horowitz's several very extensive retreats (Time Out's) from his exhaustive public concert performing/recording career. One of them lasted for a period of 15 (fifteen) Years!! My 'other' Great Mentor, Nathan Milstein, (closest friend of Horowitz) told me quite a bit about his (my words) 'musical brother' - including Mr. Milstein's talk & mention of Vladimir Horowitz's very lengthy sabbatical's ~ (Please don't think my sharing such authentic information is a criticism in any way by myself.) Personally, my own view is that sabbatical's grant rest from the rugged physical demands of world concert touring, as well as Time to continue exploring vast amounts of repertoire put aside due to demanding concert commitments ~ It's a great relief to have time to refresh ones acquaintance with more great violin, or piano (& other string instrument repertoire), especially if one has been 'itching' to learn given works yet hasn't had time whilst touring to do so, and leisurely! A great Sage (anonymous) wrote Centuries ago that "Rest produces bountiful fields ..." Surely, Ms Hahn has way beyond earned a good 'Rest' to grant herself & her family precious time to enjoy their version of 'normal' life!