August 30, 2019, 5:00 PM · If your adolescent student is frowning, groaning, sighing and acting like he or she doesn't like you any more -- don't take it too personally.

That was the message from Ohio State University violin professor and chair of Music Education Robert Gillespie at a memorable lecture he gave last spring at the American String Teachers Association National Conference. 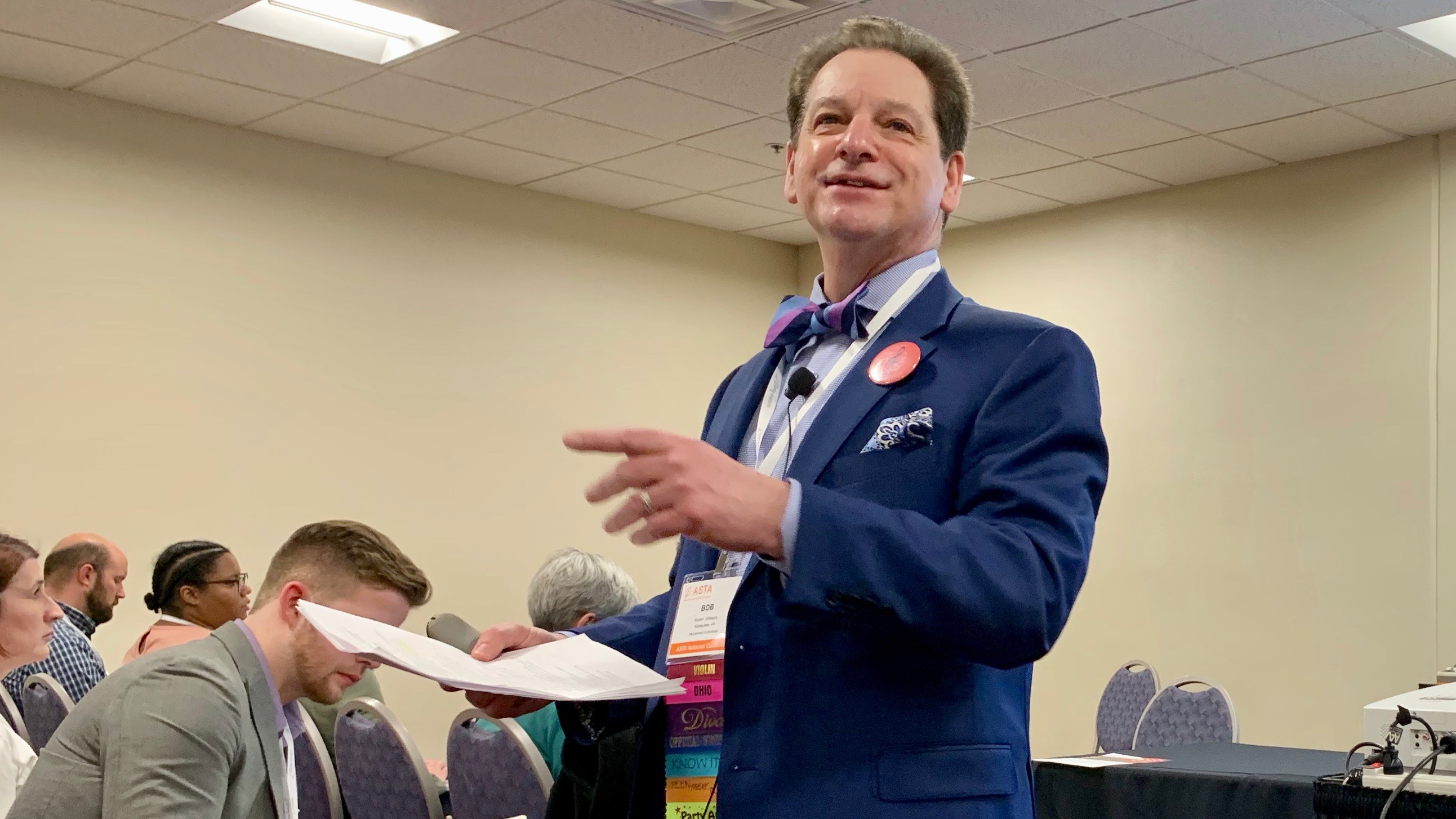 Gillespie, who also is co-author of the method book series Essential Elements for Strings, used his great sense of humor in describing the typical characteristics of a teenager, but he also offered some more serious reflections about the difficult situations that many adolescents face at home.

Science tells us a lot about the typical adolescent, who suddenly experiences an onslaught of hormones, somewhere between fifth and seventh grade. "They are all chemicals," Gillespie said, "and they have no control over that." In addition, their brains are changing. Their frontal cortex -- the part of the brain that governs decision-making and discerns cause and effect -- is not fully developed. "For most people, the frontal cortex is not completely mature until the early to mid 20s," Gillespie said.

The hormones, combined with the not-quite-developed decision-making part of their brains, set the stage for some specific characteristics for this age group. Gillespie presented a long list, based on various research, which I will share in part.

First, adolescents tend to be judgmental; they have immediate opinions about things, rather than opinions that are well-considered. They see the world in black and white, "there are no greys" - and so they make snap decisions. They tend to think they are smarter than the adults around them, and they care more about the opinions of their peers. They tend to look at the trees rather than the forest - that is, they can be blind to the big picture. They do what feels good, and they tend to view anything new as being better than anything old. They enjoy living a fast-paced life and have a hard time planning ahead. Physically, they usually need way more sleep than they are getting, and so they are sleep-deprived. They can be moody and easily annoyed. They are quick to feel emotions, and then they feel those emotions very deeply

"That intensity of emotion is so important," Gillespie said. We sometimes disregard it as being overly dramatic, but they are really feeling it. "We need to honor that."

Those hormones make them self-conscious and easily embarrassed. That makes them defensive, and slow (or unable) to laugh at themselves. They also hate to be patronized, but at the same time they are young enough that they still often need to be reminded of basic things. That can be a difficult situation for a teacher, who often has to remind without talking down.

They are by nature self-absorbed, convinced that everyone is looking at them, noticing their faults and mistakes. Very often they do not like themselves and are unhappy more than pre-adolescents and adults tend to be. At the same time, they value fitting in, more than anything else.

If you can recall being a teen, "you get up and look in the mirror and all you see are things you don't like," Gillespie said. On the serious side, this causes them to be in a high-risk group for suicide and other problems, especially if they have abusive parents, and that's something that a teacher can't always know.

Adolescents tend to blame others for their problems. They don't think about consequences, and they also have boundless energy.

"If you have students who do crazy things, it's very likely that they have not thought about it," Gillespie said.

They tend to be idealistic and well-intentioned, but they also feel afraid much of the time.

The good news is that they usually grow out of most of the bad stuff. But considering and acknowledging their stage of development as adolescents, how can a teacher motivate and best work with adolescent students? Here were Gillespie's suggestions:

Always remember, Gillespie said, you are teaching people who have value, not just teaching music.

September 1, 2019 at 09:39 AM · While the adolescent years have always been the time of the hormonal storm, a lot of teenage behavior is not directly related to hormonal activity.

We live in an age where few teenagers, actually few people, do hard physical labor. We're also in the age where there is 24/7 entertainment and distraction literally at everyone's fingertips. While we like to blame "blue light" for sleep deprivation, the reality is that with little to no physical labor, electrification, and all those devices sleep is bypassed.

The parents of one of my former students grew up in an area where there was no electricity, lots of daily chores and everyone went to bed at sunset and arose with the sun. School and studies were a luxury that got you out of hard labor. Today school and studies only take away all that entertainment and there is little to no physical labor to use up all the energy.

Many of the suggestions resonate to what I experienced with my students as they got into their teens. It isn't all simply the hormone storm, there are more factors to be considered.

September 1, 2019 at 09:27 PM · TOO MUCH INFORMATION.......either the student wants to play or not....teacher's job is simply: "Our orchestra is playing a concert for your parents on November 12th. Let's show 'em how well we can play...." Not much more incentive should be needed. Similar to: Our football team is playing Riverside on Saturday afternoon...Let's show our parents the reason for all the extra time we'e spent in practice, and win the game....don't nee all the child psych stuff.....

September 1, 2019 at 11:46 PM · I think you can keep it simple, what you want to say to students. But since teaching requires communicating with other humans, it's helpful to understand something of the psychology of the age group you are teaching. If you've never run into any situations with students that require a little bit of psychological savvy, and you have no interest in learning anything about it, I'm guessing you probably don't teach (or coach football!)

September 2, 2019 at 01:38 AM · I truly appreciated this article! It reminded me of years ago when I was researching middle schools for my child. I had numerous educators basically tell me that I should just be prepared to write off the next three years. The theory was that children in this age bracket were too emotional, hormonal, and inattentive to really learn anything. I was advised to ride it out and wait until high school. Needless to say, I rejected that "wisdom" and found a place that put in practice many of the points Professor Gillespie outlines. (They apply to academics as well as to musical studies!)

September 2, 2019 at 05:55 PM · 98.5.150.253 wrote: "...either the student wants to play or not..." I have to agree that wanting to play is essential. I remember my father signing me up for Little League - I hated it, I had zero interest in baseball (same today) eventually, and thankfully, the league kicked me off the team for refusing to participate. The fight between me and my father was epic.

The one thing I attempt to establish before I take a student is that they, not their parents or anyone else, want to play the instrument.

Working with the Youth Orchestra I can spot the difference between the young musicians who decided that they want to play and those with parents who signed them up because "it's good for them."

Teenagers, the subject of this topic, are difficult for a variety of reasons but, if there is an underlying desire to play we can work around the problems