August 22, 2019, 12:13 PM · The first time I met Hao Zhou, I did not realize I was speaking to a person who was about to win an international violin competition.

I met him at a reception, after a Pasadena Symphony concert last winter. He introduced himself as a Colburn School student, a fellow violinist who was playing in the violin section for this concert. He came off as a pretty regular guy -- one who is exceptionally genial and approachable. 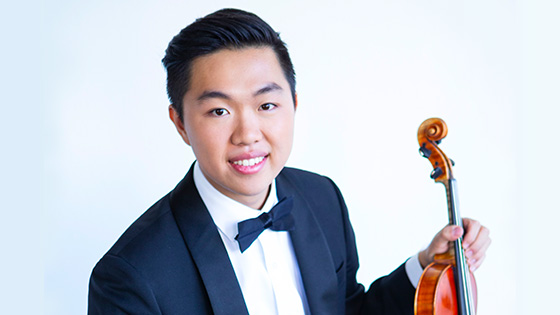 A few months later, in June, his name was everywhere: Hao Zhou, 22, of the United States -- First-Prize winner in the Montreal International Violin Competition.

Apparently this was his very first international violin competition -- and he won first prize.

Not only that, but this fall, Zhou and his quartet, the Viano String Quartet, which also includes violinist Lucy Wang, violist Aiden Kane and cellist Tate Zawadiuk, will be the first-ever quartet-in-residence at the Colburn School in Los Angeles, a milestone for Colburn and a major achievement for the quartet. The quartet members all will be enrolled in a two-year masters program.

There are so many good things happening around Zhou -- after talking with him for a little while, I began to wonder: Is it his environment, or is it the open-minded attitude that Zhou seems to bring to everything he does?

Born in Beijing, Zhou's family moved to the United States when he was a toddler.

"My mom said she really loved the sound of the violin, and when I was six, she asked me if I wanted to play," said Zhou, speaking with me over the phone earlier this summer. "I'm not sure if I knew what a violin was at the time, but I said, 'Sure, yes, why not? I'll give it a try.'"

Zhou started with the Suzuki method, and by age 13 he was going to the Colburn School every weekend for lessons and chamber music. After five years at Colburn's Community School, he then went to the Colburn Conservatory for four years, where he just graduated with an undergraduate degree. His teachers have included Martin Beaver, Aimee Kreston, Danielle Belen, and Henry Gronnier.

"As I was growing up, I enjoyed academics as well, so I was doing a lot of balancing," Zhou said.

While Zhou was studying at Colburn's Community School, he also remained a student at his local public school, Capistrano Valley High School. It's been an important connection that he has continued to maintain.

"Sometimes I go back to the school to help coach the kids there, and sometimes I go back with the quartet," Zhou said. "The music director -- he comes to my recitals, comes to performances. He's always been very supportive of what I've been doing, so I was happy to be in the orchestra at school.

"He came in the office and he played for me, and I actually laughed," Waldukat said. "He said, 'Did I do something wrong?' I smiled and I said, 'No, you did everything right.' He was just wonderful, even back then. Killer player, amazing ears. You play something and he just played it back for you. But the best thing about him, he'd just kind of a normal kid and a normal person. He's so talented, but it went beyond music."

He also happens to be a math whiz. "The first letter of recommendation that I wrote for Hao was for a summer camp called AwesomeMath," Waldukat said. "One of the math teachers would joke that she would use Hao's tests to correct her answer guide because he often found wrong answers!"

When it came to music, Waldukut could see that Hao knew how to play, "but you also are teaching them about life and leadership," Waldukut said. "His freshman year he was hands-down the best player, but I kept him second chair to the concertmaster, who was a senior and was the four-year concertmaster. Same thing in the district honor group, he was the best kid in the district, but we sat him principal 2nd because that same concertmaster was the first-chair player."

"Those were some fun conversations at first," Waldukut said. It was quite obvious that Hao was the best player, so why second chair, or principal second? "I explained, you're here to grow as a leader, and his reaction was, 'Oh that makes complete sense, sounds good, let's go play.' There is no ego when it comes to Hao, he's one of the sweetest people you'll ever meet in your life. Those experiences his freshman year helped him learn about being an inside player and about being in a supportive role."

Prior to being in the Viano quartet and during his pre-college days, Zhou was the first violinist in an ensemble of fellow students called Quartet Firenze.

"I've always had so much fun playing chamber music because I love the interaction with everybody. It's a little like a super-cool conversation that happens in front of everyone. Everybody's in a high-energy performing state, and ideas come back and forth -- that's the part I really love about chamber music," Zhou said. "My junior year (in high school), we went to Fischoff (National Chamber Music Competition) and we ended up placing third, which to us was a pretty big shock because we weren't really expecting anything."

As high school was coming to a close, Zhou faced a major decision: would he pursue his passion for math and academics, or for music?

"I knew I always loved music," Zhou said. "I thought, if this is what I really love doing, this is a great chance to give it a shot. And if by some off chance it doesn't work out, I can go back to academics, back to school. But I figured, if I wasn't practicing properly for four to six years, the time would have passed for anything to happen."

Zhou chose to pursue his undergraduate degree at the Colburn Conservatory of Music. Right away, he was placed in a new quartet. "We did our Bach audition for chamber placement, and the faculty grouped us based on how they figured our playing would fit together."

"Three of us came in as freshmen, and Lucy was a sophomore," Zhou said. "We really liked playing with each other, so we figured we'd just keep playing together and try to get some concerts, apply for some competitions."

For their name, they took the "v" from violin, viola and violoncello and applied it to the word "piano." Like a piano, all four string instruments together play both harmony and melody, creating a unified instrument. Thus, together they form "Viano."

And how does a quartet that was simply placed together at school wind up building the kind of musical and personal rapport that allows them to win competitions, procure prestigious concert engagements and participate in festivals all over the world?

"When you are constantly seeing the other people for so many hours each day, you've got to use some of those skills that you would use if you're in a relationship," Zhou said. "There are a lot of compromises, but I think that the important thing is trust and respect. It's important to make sure that everybody gets along, and that if there are any frustrations, any criticisms, that they're talked about. A lot of (professional) quartets have given us the same kind of advice: If anybody is upset with anybody else, you don't want to keep that bubbling. Or if you are unsatisfied with how somebody else is playing, let them know. It's better to tell them now than to wait until down the line, when it boils over and 20 frustrations all come out at once."

"In rehearsals we try to keep criticism as honest but not-scathing as possible, so that the mood stays relatively positive!" Zhou said.

And how does one stay positive for a big solo competition, such Montreal?

"It's so easy to go into a competition and be stressed: 'I have to play well, there are judges here, what are they going to think? They're going to not like me!' Then you want to play in a certain way to please everybody," Zhou said. "I found it helpful to try to think of it as playing concerts for an audience. When you go to a competition, of course you're stressed, but I feel like everybody is trying to play good music, trying to hear good music, so it's best to just focus on playing great music. That's what calmed me as I was playing on stage, that's what kept everything in check."

And it helps, when the competition provides the right kind of support for making that music.

"Something that really stood out to me from the Montreal competition was how friendly the staff were, and how friendly all the competitors were, too," Zhou said. "That was quite a relief, to be honest. I was really happy being there, and I loved the city, too."

Zhou worked with a pianist named Chiharu Iinuma, and "she was great to work with, so on stage I felt very comfortable," Zhou said. "And for final round, Maestro Alexander Shelley was absolutely tremendous. It felt like he had my back during the performance, so that was comforting and it made playing a whole lot easier. I tried to focus on being as expressive as I could and not worrying too much about what the audience was thinking or what the judges were thinking in that moment."

August 23, 2019 at 11:19 PM · Oh wow I heard them this winter at Colburn during a “quartet - comedy show” for kids. All four played well and had good contagious energy. I liked that they spent time putting together a show specially for children, to introduce them to string quartet music! No idea Hao was a star of his own! Congratulations on an award well deserved!