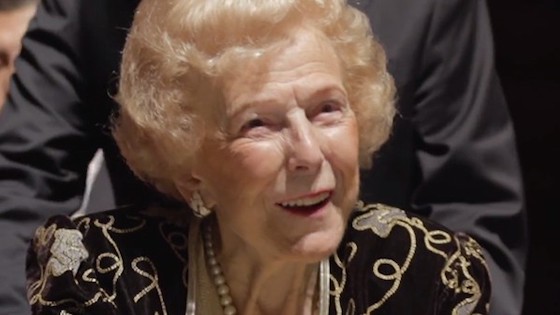 Schoenfeld died last May at the age of 98, but a memorial on Sunday in Pasadena, Calif. was proof that her legacy remains strong. Former students, colleagues, friends and dignitaries came to from all over the United States to pay their respects and to play together in her memory. 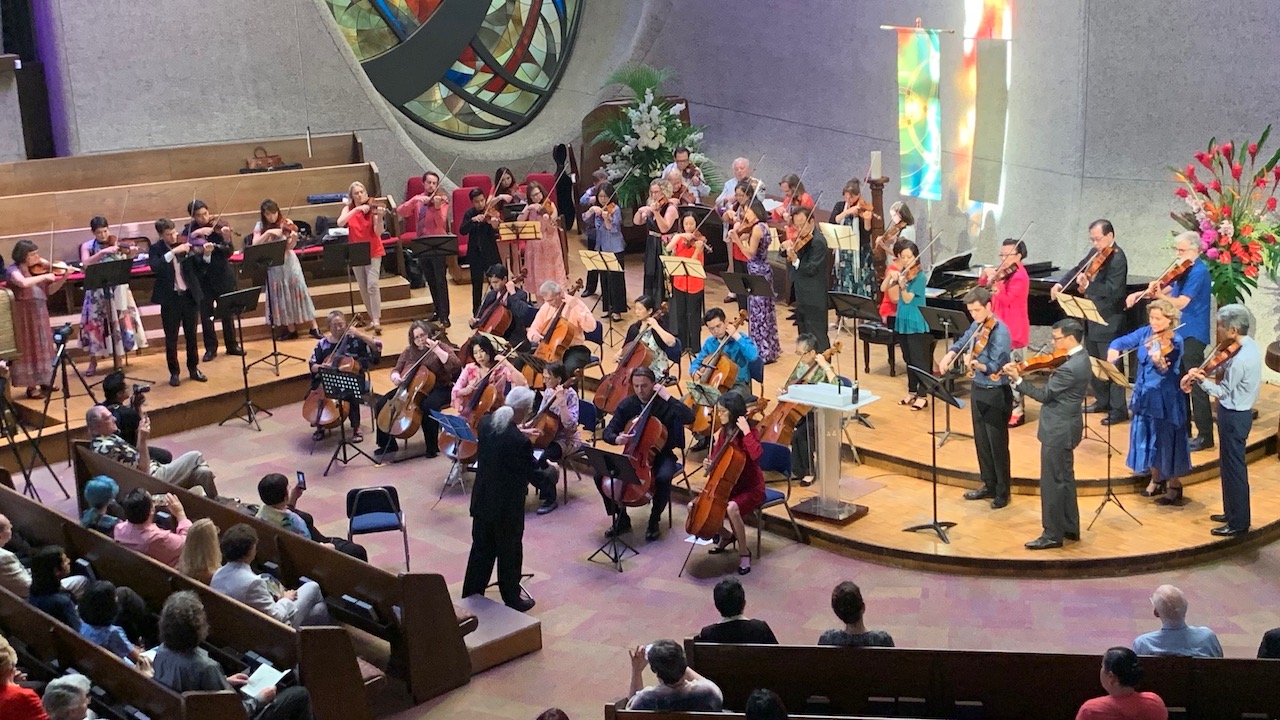 Nearly everyone on this stage was a student of Alice or Eleanore Schoenfeld's.

Among them were violin soloist Anne Akiko Meyers, USC Thornton Dean Robert Cutietta; Schoenfeld International Strings Competition Artistic Director Suli Xue; and University of Denver violin professor Linda Wang. Many of those present - more than 50 by my count - were former students of both Alice and her late sister, long-time USC cello professor Eleanor Schoenfeld, and by the end of the service they were all on stage, playing together. Throughout this story, I've included videos of their performances -- enjoy listening as you read. Rarely does one hear such fine music at a memorial!

Speaking after she played, Meyers recalled her first trip to Schoenfeld's home at age seven. Her mother drove her from their desert home in Ridgecrest (the site of the recent earthquake) to La Canada, Calif. "We drove three and a half hours each way for lessons," Meyers said. Schoenfeld's living room, where she taught so many students, remained exactly the same for as long as she knew her.

"With Alice, it was always about the music," Meyers said. "How to make a beautiful phrase and how to find the soul of a note. Her attention to detail was meticulous. Studying with Alice really tested my patience -- she would painstakingly work on a piece for what felt like forever!"

Alice also would set up performance opportunities for Meyers and other students, and if they needed a ride she would drive them in her Mercedes -- which, Meyers admitted, could be a harrowing experience!

This wasn't the only driving story told at the memorial -- Pasadena Symphony President Lora Unger also described an incident some 10 years ago in which Schoenfeld came to the Ambassador Auditorium to hear Meyers play. Mysteriously, and a little alarmingly, they found Schoenfeld's car parked on the plaza. Alarming, because it is not supposed to be accessible by car! Apparently Schoenfeld had driven up a set of stairs to park there, to the astonishment of all.

"Somehow she managed to always get what she wanted -- musically from her students, and budgetarily, from me," said USC Thornton dean Robert Cutietta. He reported that every now and then, Schoenfeld would have orchids delivered to his house, with a note saying, "Thanks for being a great dean."

"Things like that don't normally happen to deans," added. Such random acts of kindness were normal for her, and "she exemplified grace, class, and a joy of life."

BELOW: Cellist Fang Fang Xu plays the "Sarabande" from Bach's Cello Suite No. 5.

Cutietta said he once took her to a concert by a pianist that she'd never heard of, despite the pianist's great popularity -- Elton John. In typical fashion, she said that he had "terrible technique, but he knows how to connect with his audience!"

When she was 92, Cutietta tried to convince her to cut back on the number of students she was teaching, as she was teaching far more than was required in her contract. She dismissed this idea, saying, "I still have more energy than all of my students put together!"

Former students attested to that energy. Schoenfeld often would teach all day long without eating, and sometimes a lesson would last up to five hours, said former student Suli Xue. He once asked her how she does it, and she told him, "When you are into something, you forget everything else."

"She devoted her whole life to music education and art," said Xue, who in 2013 helped Schoenfeld in reaching her goal of founding the Alice and Eleonore Schoenfeld International String Competition in honor of her sister. "It was her depth of character that inspired me to reach new heights. She taught me to use my musical expertise to serve the community and society."

In her final years of life as she fought off illness, she kept her optimism, her will to live -- and her perfect hair, a point of pride for her."She was a beautiful lady, inside and outside," Xue said.

Xue said that he once took Schoenfeld to a New York Philharmonic performance, and when they went backstage afterwards, she held court with half the string session, many who knew her as their former teacher. "They were thrilled to see her," he said.

Pianist Mary Au pianist with the Piatigorsky Foundation and Schoenfeld Studios who was a close friend to the Schoenfelds, told members in the audience that the Schoenfeld sisters "considered each and every one of you their child." They always felt it was their responsibility to "give every ounce" when they taught each student, and they proudly followed their students' careers.

As Meyers said, "We all feel Alice's deep impact in our lives; we are her family, and she was truly one of a kind."

The service culminated with about 50 former students forming a string orchestra to play two pieces by Bach, one conducted by Frank Fetta and the other by Fung Ho. In the video I've panned around so that you can look for anyone you know in this group. You can start by picking out Anne Akiko Meyers, on the left!

Here, also, is a video containing many photos of Alice at every stage of her life, edited by Salvador Carrasco:

July 31, 2019 at 12:59 AM · Thank you for this. What a wonderful event. That many diverse people playing together under what I suspect was with minimal practice speaks well of their educator.

July 31, 2019 at 06:19 AM · Laurie, thanks so much for putting together and sharing this very moving tribute. As a violin teacher and student and music lover, this means so much to me. There can be no greater tribute for a violin teacher than the coming together of so many students to share in the joy of music making.

July 31, 2019 at 11:28 PM · What a beautiful tribute! And such a legacy! Thank you for taking us along with you, Laurie. The Bach "Air" was so moving. (I particularly enjoyed the beauty of John Walz playing pizzicato.)

August 1, 2019 at 07:03 PM · Thank you for the great article, Laurie. My son, Sebastian Carrasco, studied with Alice for 8 years, and my husband is the one who made and posted the VIDEO TRIBUTE at the top of your replies. See you tomorrow at the PSO rehearsal!

Introduced by the Founder of the Idyllwild Arts Foundation, Dr. Max T. Krone & wife, Bea, my parents met Alice & Eleanore Schoenfeld w/their parents under blue skies & pine trees where animated conversation between all Six ensued! In my then favourite grey w/scalloped sleeved cotton elegant 3/4 length Summer Orchestra dress, I was immediately drawn into the Alice & Eleanore Schoenfeld 'World of Music Enthusiasm without Boundaries' environment! So were both of my already distinguished musician parents & from then on that glorious Idyllwild Sunday brought a lifetime of unbreakable, consistently mutually respectful professional & enduring for Life personal relationship's ~

Prof Alice Schoenfeld contributed greatly to the deep musical traditions of German Romantic Style Works for Concert Violin, Chamber Music & Orchestral Literature with her musical roots at the Heart of Austrian/German Culture, planting its seeds into Southern California soil & later, into awaiting Asian Soil ~ Her love & sisterly fidelity to Eleanore, who pre-deceased Alice, bore exceptional Fruits with the establishment of The Alice and Eleanore International String Competition, held in China, affording many gifted Violinists & Violoncellists rare opportunities to practise rigorously to compete/perform much of the greatest European string repertoire, which was actually a brilliantly conceived Alice & Eleanore teaching tool ...

Viewing/hearing some of Alice Schoenfeld's musically moved & respectful pupil's offer their performances 'Up' Sunday last, July 28, 2019, in a beautiful Pasadena church, 'In Memoriam' of their much missed and adored Teacher, was and is so very loving a 'Celebration of the Life of Alice Schoenfeld', whom my family knew for many decades, that my pen is exhausting the Reply page of Violinist.com, with genuine compliments to the Editor of Violinist.com, Laurie Niles, for her eloquence and classical presentation of this Special Tribute to a Glorious Soul & Teacher of Rare Quality in quietness & strength for future reminiscence's of a Woman of the Violin who gave far more of herself than ever imagined, while carrying on so bravely upon the loss of her adored & cherished sister, Eleanore - the lovely 'other half' of Music's beloved Alice Schoenfeld ~

Offered by Elisabeth Matesky with Love amid Sorrow ~ 8/4/19