July 28, 2019, 5:54 PM · Winners were named on Friday in the Cooper International Violin Competition. 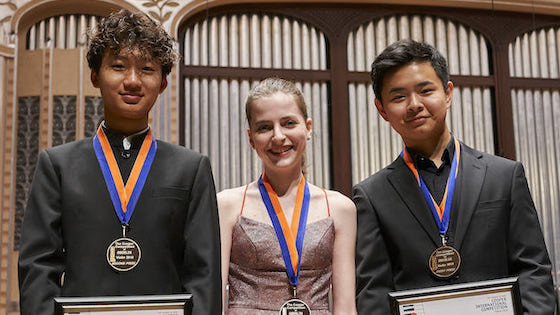 The three finalists played on Friday for the Concerto Finals at Cleveland's Severance Hall with the Cleveland Orchestra, conducted by Gemma New. By advancing to the Concerto Finals, all three performers also earned full-tuition scholarships to attend Oberlin Conservatory.

Jury members for the 2019 competition included Chairman Gregory Fulkerson, Sibbi Bernhardsson, Radu Blidar, Yi Huang, Marilyn McDonald, Naoko Tanaka, and Almita Vamos. Awards include a first prize of $20,000, second prize of $10,000, and third prize of $5,000. The top three competitors also will be awarded full four-year scholarships to Oberlin Conservatory, pending admission. The fourth, fifth, and sixth prizes of $1,500 each and the Audience Prize of $500 will be presented at the conclusion of the Recital Finals on Wednesday.

The competition began on July 20 with 24 violinists, ages 13 to 18, from eight countries and seven U.S. states. The Thomas and Evon Cooper International Competition, founded in 2010 and held at Oberlin, alternates annually between piano and violin.

First-prize winner Chen, from Princeton, N.Y., is a student of Naoko Tanaka and Cho Liang-Lin at The Juilliard School Pre-College program. Below is Chen's Recitals Finals performance with pianist Akiko Chiba, in which they played the "Presto" from Beethoven's Sonata No. 4 in A Minor, Op. 23; the "Largo" from Bach's solo Sonata No. 3; Chausson's "Poème," Op. 25; and Amy Beach's "Romance," Op. 23.

August 1, 2019 at 10:59 PM · When do pianos sound more 'piano'? They should be correctly called by their full name 'pianoforte.' Actually, the original spelling must have been 'piano=forte'. Over time, the '=' was omitted and later the 'forte' was omitted as well. The 'piano' part of the term is still used, but in actuality, that's was really missing.