Review: The KorfkerRest Shoulder Rest - Is It Worth It?

But in truth it has made quite a lot of difference for me. 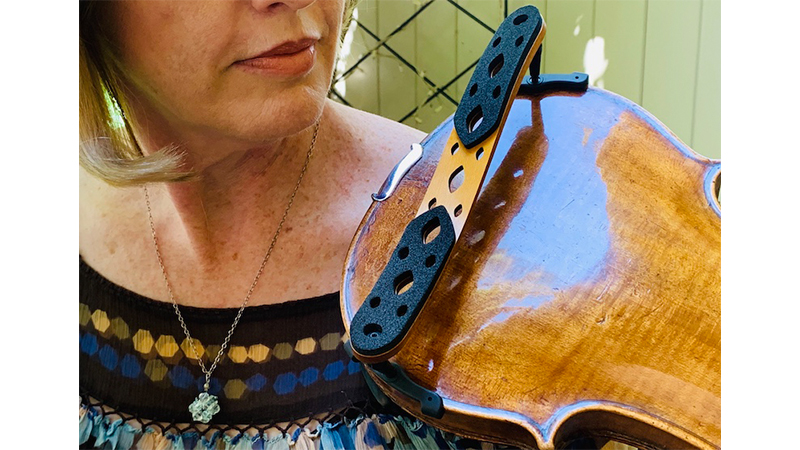 In March, Pirastro gave me a KoerfkerRest to try, so that I could review it for all of you. This was a big deal - I felt like they were entrusting me with a brick of gold, as this is a very expensive shoulder rest. It retails for a little more than $300 from SHAR, and I understand it's about £259.00 in the U.K. and €245 in Europe. To be honest, I might have ruled out this shoulder rest, based on price alone, without even considering it.

I told them that I would need to live with this shoulder rest for a while before I could make any kind of judgment about it, and definitely before I could write anything about it. Also, if I didn't like it, I was not going to say that I did. In fact, I'd just send it back.

Let's just say that I have no desire to send it back, or to go back to my old shoulder rest, or to try anything else -- because it's working, and it's working well.

Here are some of the ways it has made a difference for me:

Honestly, I think I was traumatized by my old shoulder rest, and I didn't even know it. If that seems a little too dramatic, I can say that I was conditioned by the old shoulder rest and its propensity to fall off all the time. Really, it's been a lifetime of various brands of shoulder rests that would fall off the fiddle!

When I first put the KorfkerRest on my violin, I confess that it did not immediately "fit." First, I was having a hard time getting it to the right place on the instrument where I needed it. One tip: When sliding it on, it really needs to clamp on. So I needed to just slightly force the feet outward to get them on the edge of the instrument. But then they stay. Man, do they stay!

I also needed to do a little adjustment to the angle of the feet to get them just right. The KorfkerRest is highly adjustable, which is great news. You can bend the wood (carefully!), adjust the legs, narrow or widen the rest, and change the tilt. The only bad news here is that you have to think about it and do some experimenting. If you don't feel like tinkering and you just want to get it out of the box and put it on, then this can be a little annoying. But it's really not that hard, and Pirastro has exhaustive instructions online for setting it up, as well as a little booklet that the shoulder rest comes with. It also comes with extra foam pads, an "Ergopack" to make further adjustments (I did not need this but I think it helps particularly for violists making size adjustments), and a tool for screwing and unscrewing all the little joints.

Once I started using the KorfkerRest, I started noticing other people with this shoulder rest. There were more than I expected! They also had different observations about it than I did. The first symphony concert I played after getting the Korfkerrest, I turned to see that my stand partner also had one. He said he had no regrets about the price, considering how much he plays. He liked the elegant look of it, and he liked the way it did not inhibit the sound of his instrument. Then at another gig, a different stand partner also had a Korfkerrest. She said she had had it for several years. I asked her if she'd made many adjustments to it, and she said no, she has been happy to use it as it came out of the box, without adjustments. She liked how light it was.

My adult student became interested in the KorfkerRest as well, after noticing my new rest. So I let him try it at his lesson. The very next week, he came to his lesson with a KorfkerRest! "I love it!" he said.

The KorfkerRest was invented in 2014 by a violinist named Berent Korfker, who was an assistant to Zakhar Bron for seven years, then a professor at the Royal College of Music in London for 13 years. He also has invented something called the KorflerCradle, which is more elaborate than the KorfkerRest and is focused on maximizing sound from the violin. (It's not something I have tried.)

If I can share just one general observation, it's this: If your shoulder rest is not working for you, then find one that does. Different shoulder rests work for different people, as we all have different-shaped shoulders and necks and jawbones -- and we have subtly different-shaped violins and set-ups as well. I had come to accept a lot of things about my old shoulder rest, and I did not even realize that they were actually causing me quite a lot of stress. So find a shoulder rest that fits your violin well and that fits your body well. Be proactive about making the necessary adjustments so that it works for you. And if you cannot solve the problems with your current rest, look into other ones! I've had a great experience with the KorfkerRest, and it will remain the shoulder rest that I use.

July 22, 2019 at 03:52 PM · Laurie, great review. I agree with you, it's pretty revolutionary in design and performance. I got one for my birthday last year and I was amazed at how comfortable my setup, shifting, vibrato, and general playing is. It's worth every penny.

July 22, 2019 at 05:31 PM · I have an inexpensive Kun rest and no problems with it but would have no problem paying the extra money for a Korfker if I was able to demo oone and it improved my sound or hold but have not seen this one for sale locally.

July 22, 2019 at 07:36 PM · I just want to throw this out there: the reason it stays in place fairly well is because the rubber is very, very grippy. So if you try to "slip" the feet on as you would with a normal rest, you can damage your varnish. Make sure that with the Korfker, you are bending the feet outward whle putting it on, and the releasing them back in to grip the violin. No "sliding" should happen.

Also, the thinness of the rest itself is appealing to me. That should meant that you can set it very low. But how flexible is it? How low can you set it without it touching the back of your violin while in use? Any experience with that Laurie?

July 22, 2019 at 08:07 PM · The wood is bendable, and the technology behind that is part of why it is so expensive. Here is Pirastro's page about it. Scroll down and click on "bending the rest," and that page gives you an illustration of just how low you can get it. Pretty low! You'd bend the rest first, then adjust the legs so they fit your fiddle.

July 23, 2019 at 07:10 AM · The first thing that strikes me is the length of the feet. About twice what I normally use with my Wolf Forte. I could see this being an issue for me.

July 23, 2019 at 03:40 PM · My personal experience with using the Wolf for about 20 years is that it was comfortable and adjustable, but the feet tended to lose their grip, so the rest fell off very frequently. For a while I tried replacing the rubber on the feet, and when that didn't work I just got an entirely new rest, which solved the problem for a few years before it started falling off again.

That said, I would reiterate that different rests work for different people, so the Wolf is a fine rest for many people!

Take a look at all the greats who did the same. Look at Ida haendel. Freedom scaffolding only pushes the highest positions further away from your arm.

The instrument needs to move freely on the collarbone, resonating through the skeleton and torso

What a joke. Look at all those that do. The anti-chinrest, anti-shoulder rest crowd are like evangelicals, preaching an old antiquated doctrine.

July 23, 2019 at 09:25 PM · In every thread about shoulder rests there's always someone who says "bin them" and look at all the greats who never used them.

Personally, I think anyone who can play a three-octave D major scale at speed with neither shoulder rest nor chin rest is probably a freak of nature. But there again, that's almost definitely the case if your skeleton can resonate. I'm one of those unfortunate people whose skeleton is clad in flesh, which has a pretty significant damping effect.

July 24, 2019 at 02:45 PM · Michael Browder, the old antiquated doctrine is non-evangelicalism - you might as well ditch religion entirely (but keep the music!).

July 24, 2019 at 04:55 PM · I would love to try the Korfker as I have never been able to find a shoulder rest that I’m really happy with (and I cannot play without one). However, I would need to be able to try it for a few weeks as you have done before spending that amount of money - and of course that is not possible. This is something that the makers need to think about as they may be missing out on a lot of sales as a result.

July 24, 2019 at 07:48 PM · I use a Bonmusica rest with my own modifications to the feet(Everest feet)which gives me more range than the feet that come with the rest. One of the things I like about it is the curve I could put in the extension at the top of the rest. It essentially hooks over my shoulder. I had tried five different rests before settling on this one. The Korfker looks great and I love the weight but without that extension beyond the feet it would never fit my physique.

July 24, 2019 at 10:05 PM · Currently I use a Bon Musica, but it's too tall without major fabrication alternation. Is this one better in that respect?

The KorfkerRest is definitely very adjustable, and between bending the wood, and adjusting the legs you can get it higher and lower and give it more bend. But I don't know if you could match that kind of "hook" that the Bon Musica has. Use what works for you!