July 18, 2019, 1:49 PM · Welcome to "For the Record," Violinist.com's weekly roundup of new releases of recordings by violinists, violists, cellists and other classical musicians. We hope it helps you keep track of your favorite artists, as well as find some new ones to add to your listening! 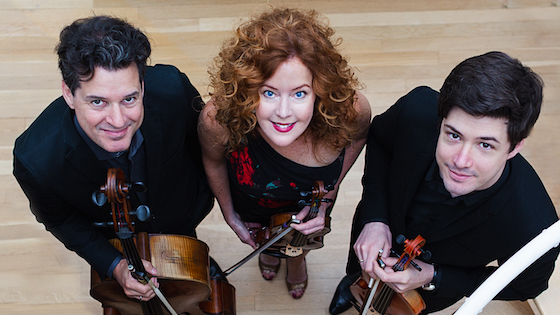 For its recording debut, the Chicago-based Black Oak Ensemble has put together an album of music by six Jewish composers whose work was suppressed by the Nazis, with works by Dutch composer Dick Kattenburg; Czech composers Hans Krása and Gideon Klein; and Hungarian composers Sándor Kuti, Paul Hermann, and Géza Frid. "It is poignant music but also incredibly human," said the trio's violinist Desirée Ruhstrat. "That these pieces were written in a concentration camp is incredible." Members of the trio did not know the heartbreaking stories behind the creation of these works when they first came across three string trios by Klein, Kuti and Kraza - in a bookstore in Budapest. The other works, by the Kattenburg, Frid and Hermann, came from contacts the musicians had with foundations and family members of the composers in Europe. "These pieces stood out to us -- we did not know their stories or who the composers were," Ruhstrat said. "I think it kept us honest regarding the music. The music follows a typical format and harmonies that most of the pieces from that time period (the 1930s-40s) would have had. The influence of Bartok, Schoenberg and other greats is audible, but each composer's voice is incredibly unique."

When it comes to the composers, one survived World War II as a member of the Dutch resistance, the others perished in concentration camps and elsewhere in Nazi-occupied Europe. Another inspiration for "Silenced Voices" was the educational efforts of violist Aurélien Fort Pederzoli's mother, a history teacher of Sephardic Jewish descent who led annual student field trips to locations such as Prague, Budapest, Auschwitz, Treblinka, and Terezin. "This music needs to be performed," Ruhstrat said. "We think it is so important, and we are honored we had the opportunity to record it - and in the case of Frid's "Trio a cordes" Op. 1, offer a world premiere - and share it with our audiences." The Black Oak Ensemble will perform these works live in several upcoming concerts across Europe and the U.S., including the Everlasting Hope Festival in Terezín, Czechia.. BELOW: Introducing the album, with musical excepts and thoughts from the musicians:

July 19, 2019 at 12:50 AM · How wonderful that the group is recording pieces by the Jewish composers who were victims of the Nazis and whose music might otherwise be forgotten. Bravo!