One way is the help them uncover some "hidden gems" in the repertoire -- pieces that are not played as frequently as the repertoire on graded exam lists or in the Suzuki books. There are plenty of pieces that still help students reinforce new skills and techniques but that are off the beaten trail. This kind of piece allows a student to take a little more "ownership" and to make a little splash at the recital, playing something that people haven't heard before.

But how can a teacher (or student) find some high-quality but lesser-played pieces? Violinist Brian Lewis, who is Professor of Violin at the University of Texas, gave a two part lecture in which he presented seven such pieces to teachers attending the 2019 Starling-DeLay Symposium on Violin Studies at The Juilliard School. 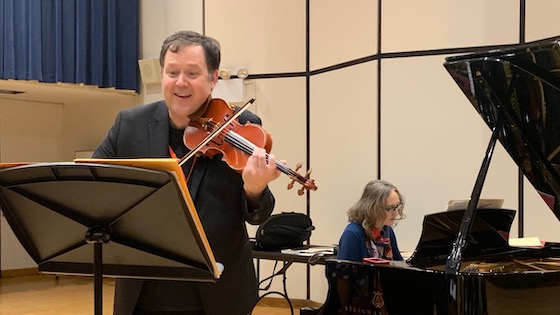 I've organized a list of the pieces that he presented here, along with links where you can buy or download them online -- though a few pieces are so rare that I was not able to find a link. In those cases, you may have luck finding them through a local university music library. Also, Lewis is working on getting permission to provide PDF's of the other pieces, and I will add those in if they become available.

In all but one case I've included videos of our read-throughs of the pieces, showing the music in real time. Keep in mind that most of the class was sight-reading - it's a bit rough! But I offer these videos to show you the pieces along with the sheet music, and at a slower tempo with piano accompaniment, in case you wish to read through the piece along with the video, as if you were in the class. My hope is that it will give you an idea of the general technical requirements and flow of each piece, in case you wish to learn the piece yourself or to offer it to a student.

Lewis also described some of the technical difficulties each piece may bring, offering suggestions for how to "preview" those techniques before starting the piece. "We have all these violin tricks we have to do, and if we haven't practiced them before, we'll feel hopelessly sad," he said. He warned teachers to keep in mind that "the spots that are difficult for you may be different from the spots that are difficult for your student. Never make your issues your students' issues!"

Gavotte No. 2, Op. 23 by David Popper (arr. Leopold Auer)
Sheet music is available through IMSLP (click on "arrangements and transcriptions" to find the violin version).

This gem of a cello piece exists in an arrangement by violinist Leopold Auer, and the great news is that it is in the same key, so potentially it could be played together by both instruments in a group class setting. It's an energetic and peppy piece with a good amount of technical challenge -- but not too much. In this case, I didn't get a great video from the class, so I offer you a lovely performance of the cello original, played by Margarita Balanas, age 10:

Lewis encouraged teachers to explain the history of a piece with their students, as it helps them gain more interest in the music.

Auer (1845-1930), who arranged the Popper piece, was the Hungarian pedagogue who was violin professor for many years at the Saint Petersburg Conservatory. There he taught an entire new generation of great violinists, including Nathan Milstein, Toscha Seidel, Efrem Zimbalist, Mischa Elman and of course the great Jascha Heifetz, who made many arrangements of own.

Popper (1843-1913) was a cellist who played chamber music with some of the greatest musicians of his day, even premiering Johannes Brahms' Piano Trio No. 3 with the violinist Jenö Hubay and Brahms himself.

Some of the technical requirements for this piece include natural and artificial harmonics, spiccato, double stops and up-bow staccato. The piece contains these technical challenges in limited amounts, so it allows a student to practice them in action and have success. For example, the up-bow staccato is only four notes in a row, rather than a super-long run. In the video below, Lewis takes us through several simple preparatory exercises that students can do for up-bow staccato. Lewis emphasizes feeling the staccato with both the index finger and the thumb.

There are two ways to handle the start of an up-bow staccato run at the tip: you can release the weight, then start; or as Galamian recommended, start from a point of tension and keep the weight at the tip. "Both are correct," Lewis said, "It just depends on how much "k" sound you want." (More tension, more "k-k-k-k")

Lewis described each small staccato as a "smile" bow, with tension then release. "The faster we go," he said, "the less smile bows we have." Once you get to the 3/4 point of the bow, going toward the direction of the frog, the stick starts to bounce. So if you don't want them to bounce, you need to get the notes in before that. "The more notes, the closer to the tip you need to travel," he said.

In the "Piu Mosso" of this piece there is an open D-string drone; Lewis said to add some vibrato on the top note but not too much. As the dynamic fades, fade to non-vibrato to dissipate the energy and match the non-vibrato the open string.

Here is some beautiful and lyrical music from a 1930s romance movie called 'Intermezzo', which was Ingrid Bergman's earliest Hollywood movie and was nominated for two Academy Awards. Originally performed by the violinist Toscha Seidel, the piece is full of old-fashioned elegance.

There are many choices for bowings, and Lewis recommended giving students options and allowing them to decide, with the caveat that "when you give your students choices, make sure that both work." The beginning of the piece has a pattern of three, something to point out to students to help them think about architecture and hierarchy in music.

Here is the read-through video:

"When I have my student play this, I make them go watch the movie!" Lewis said.

"Flausino Vale, like Bartok, thought about the music of his country," Lewis said, noting that this music is based on Brazilian folk music. This particular piece, Preludio 15, was played by Heifetz. I did not get class video for this one, so below is a video of Heifetz:

It's just two pages long, with some rhythmic challenges. Lewis recommended playing it at the balance point of the bow, and though Heifetz plays it quite fast, it also sounds great at slower tempos. "You can play it at any tempo you like," Lewis said.

Here is a piece that also presents a number of techniques -- up-bow staccato; double-stops (thirds); some position work; trills -- but all in limited amounts. Here is the read-through video:

The "Gavotte" is the last movement of a four-movement suite, following a Prelude, Minuet, and Air. It is not harmonically complex, and Lewis recommended it as a good sight-reading piece. The fingerings are simple enough that you can let the student make his or her own choices. Again, when presenting them with alternatives, "make sure that all the possibilities are good."

"I do give them fingerings and bowings, but here are a lot of times when I want them to make a decision," he said.

For example, for the first two notes of this piece there are many possibilities: Start on a third finger and go to a harmonic on either third or fourth finger; or just stay in first position for both notes.

Also, in a number of places there is an upper-neighbor note that resolves, which allows the teacher to explain the term appoggiatura to the student. Fun fact: Lewis said the first-known use of the appoggiatura in music was to portray falling tears.

The end of the piece has a passage of double stops, mostly thirds, but it is not a long passage. "I'm always looking for pieces that have thirds that don't look like Flesch," that is, a page from Carl Flesch's densely-packed Scale System. A full page of double-stop thirds can be intimidating, even just looking at it!

Lewis personally knew the composer David Diamond (1915-2005), a violinist and composer who was on faculty at The Juilliard School for many years. Diamond studied composition at the Cleveland Institute of Music and Eastman, also taking lessons with in New York with Roger Sessions and in Paris with Nadja Boulanger. Opinionated and openly gay, his best-known composition was a piece called Rounds, for string orchestra.

"Canticle" was written in reaction to the death and destruction World War II, in a slow marching tempo that depicts the voice of inevitability, a sad walking.

"I find this haunting," Lewis said, "it rips my heart out." Here is the read-through video:

The piece "Sea-Shell" was composed in 1911 by Carl Engel, based on a poem by the same name by Amy Lowell. It was arranged for violin by Efrem Zimbalist. Here is the reading video, which also has the poem at the beginning:

A key signature with six flats provides one challenge in this piece; "violinists hate flats, wind players hate sharps!" Lewis said. The piece is marked "con sordino," and Lewis recommended performing it with a mute, but not practicing it with the mute. There are also runs, which can be practiced by simplifying them into manageable groups of four. The piece also has passages of artificial harmonics, as well as some very high playing.

Lewis said he fell in love with this piece via a recording by violinist Michael Rabin. "I was so obsessed with this piece," Lewis said; he tracked it down and surprised his teacher Dorothy DeLay with a performance of it, when she was with Lewis's family in in Ottawa, Kansas, for a camp run by Lewis's mother, the Suzuki pioneer Alice Joy Lewis. "My mom said she cried."

"Molly on the Shore" is based on two Irish Reel tunes called "Temple Hill" and "Molly on the Shore." Written by Percy Aldridge Grainger, it was revised with his blessing by the great American violinist a href="https://www.violinist.com/blog/laurie/20105/11236/">Maud Powell.

Here is the reading video: