June 8, 2019, 5:31 PM · Congratulations to the winners in the 10th Leopold Mozart International Violin Competition in Augsburg, Germany! They are: 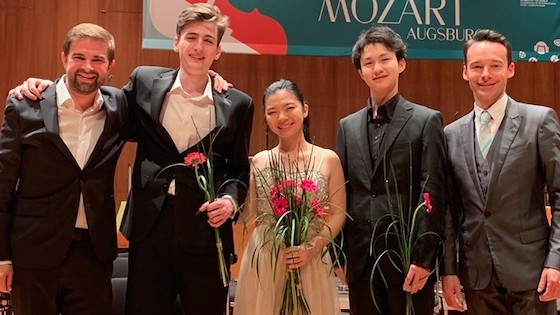 Joshua Brown currently studies with Donald Weilerstein at New England Conservatory of Music, having previously studied with Almita and Roland Vamos at the Music Institute of Chicago’s Academy. He has won numerous competitions, awards and distinctions, including being named a 2018 Yamaha Young Performing Artist; National YoungArts Winner in both 2016 and 2017. He won Second Prize and Audience Award in the Cooper International Violin Competition, and as a member of the Kairos String Quartet he won Gold Medals in both the Junior Division of the 2018 Fischoff National Chamber Competition and the Junior String Division of the 2018 M-Prize International Chamber Arts Competition. Brown plays on a 1679 Pietro Guarneri, on loan from the Stradivari Society of Chicago.

Founded in 1987, the Leopold Mozart International Violin Competition takes place every three years in cooperation with the city of Augsburg and the Leopold Mozart Center of the University of Augsburg. The competition honors Wolfgang Amadeus Mozart's father, Leopold Mozart, a leading violin pedagogue of his time who trained his son and also wrote the important Treatise on the Fundamental Principles of Violin Playing. It is open to violinists between the ages of 15 and 30. Previous winners include Isabelle Faust, Ji Won Song, Maia Cabeza and others.