June 4, 2019, 4:21 PM · When it comes to giving a masterclass, violinist Mark Kaplan is more the soft-spoken professor than the tsunami of energy. But listen closely, and his ideas are wonderfully intelligent and often completely game-changing.

Kaplan has been a professor of violin at Indiana University's Jacobs School of Music since 2005, before which he taught as a professor of violin at UCLA. He is a former student of Dorothy DeLay at The Juilliard School. He has toured extensively as a soloist and made numerous recordings, his latest being a recording of the Bach Sonatas and Partitas.

On Saturday in a masterclass at the Starling-DeLay Symposium on Violin Studies at The Juilliard School, Kaplan offered ways for students and teachers to update their thinking on Bach and Mozart, as well as helping students find a musical through-line in virtuoso and Romantic pieces.

Student artist Anna Wei started the class with a performance of the first movement of Wieniawski's Concerto No. 1 Op. 14, a piece that starts with 10ths and just gets more hair-raising technique-wise from there. 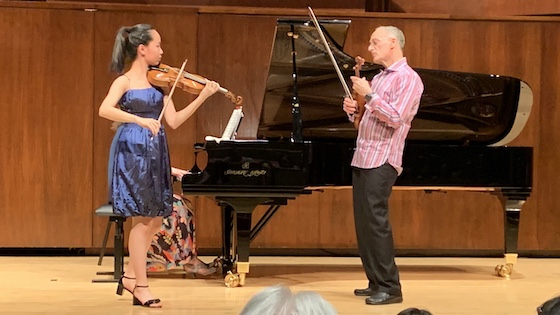 Wei played with a nice virtuoso attitude, monster sound up on the G (I mean that in a good way) and a down-bow and up-bow staccato that -- I think it's fair to say -- was the envy of every violinist in the room, and there were about 200.

"That sounds great - it's like scary good," Kaplan said when she concluded. "Can you sell me your up-bow staccato? What I'm delighted about is that you play beautifully and musically, and it's a joy to listen to."

He pointed out that Wei is nearly the same age as Wieniawski when he wrote this piece -- she is 18 and Wieniawski was 17. (!)

Now that she has it so well in hand, Kaplan suggested the idea of adding a little more grit and aggression, "try being not so nice," he said. "One great thing about any performance is that you can be something you're not."

"It's a little like a glorious etude -- what is your message?" Kaplan said. Wei said that Wieniawski seemed to be trying to show off -- Kaplan agreed, but was a little more specific in the attitude, "He's saying 'look at me, I can do this.'"

He asked her what her favorite recording of the piece was, and she said she liked violinist Michael Rabin's recording. Kaplan agreed that it's a fine recording, but "I don't think that Wieniawski himself was that refined," Kaplan said. "The recording that changed it for me was Itzhak Perlman's, because there is such an energy to it." Perlman's vibrato has electricity, but warmth. "There are not many recordings of this piece - not many violinists are crazy enough to learn it!" he said.

Next Christina Jihee Nam played J.S. Bach's Chaconne, from the Partita No. 2 in D minor.

"There are so many ways to play Bach these days," said Kaplan. When he was younger, only a few people were exploring period performance; now there are many wonderful performances out there, he said. 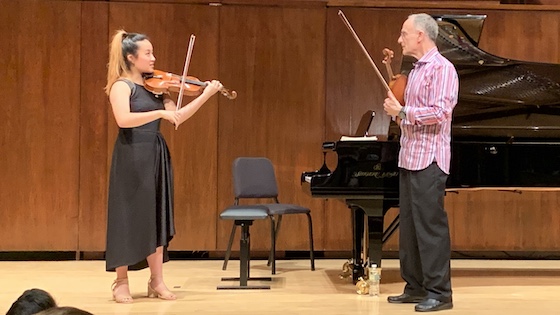 He urged her to explore those ideas, but "instead of thinking about style, think in terms of knowledge," Kaplan said. "I don't perform on a Baroque violin, but I find there is so much to learn from that movement. Some things are opinion, but some has become more like fact."

For example, he talked about how to handle quadruple stops -- that is, when Bach writes a chord that includes four notes stacked on top of one another. You can't play four notes on four strings, all at the same time. So how do you do what Bach asks? Nam had solved the problem by playing two strings, then rolling to the other two strings, as many people do in this music. But "breaking chords two-and-two was probably not done in Bach's time -- or Mozart's time, or Beethoven's time." It was done in music such as the Bruch Concerto, and later Romantic works.

If you were to play the chord on the piano, how would you play it? "On the piano you can do anything," he said. Then he demonstrated how it sounds to play the bottom two notes of the chord, followed by the top two. "On piano we would not choose two-plus-two."

So what is a more period-appropriate way to break the chord in Bach? One option is to lean on the bottom note, so that "now I'm aware of your interest in the bassline," Kaplan said.

None is wrong, but for "each of these methods, you have to think about planning your bow," he said.

Kaplan also brought up an issue about voicing, using this passage as an example:

"What if it's not forte and piano, but just two different voices?" Kaplan said. "Otherwise it's a funny conversation, where one person is really loud and the other is really soft."

He suggested making some of that difference by varying vibrato, which is indeed okay to use in Baroque music. "Vibrato is an essential part of what makes the violin resonate," he said.

Another problem that comes up in the Chaconne and also generally in solo Bach is when there is a melodic note in the middle of the chord. It's nice to end a chord on the melodic note, but should you do so, if it means rolling back down to the note? Unfortunately when you do that "it sounds like a donkey," Kaplan said. "It's a solution to a problem, which is that our melody is in the middle of the chord." Another solution is to simply not leave the note when playing the chord (so you don't have to actually roll back to it), but that's sometimes nearly impossible to do, if the note is on say, the G or D strings. Period Baroque players don't view it as a problem: just play the chord as normal and the listener will hear the right note within it, but Kaplan doesn't feel that approach makes it clear to the listener. Another way is to use a lot of bow on the bottom note, if that is the one to be brought out, and very little on the rest of the chord.

The point is this: every solution has its problems. Choose yours and commit to it. Whatever you decide to do, "at the moment you perform, you want to feel that your way is the only way that you want to perform it, because you have to play with conviction," Kaplan said.

Kaplan suggested getting an urtext edition of the Sonatas and Partitas, just to be aware of Bach's original writing. For understanding the theory behind Bach, he recommended a book called Bach's Works for Solo Violin: Style, Structure, Performance by Joel Lester. 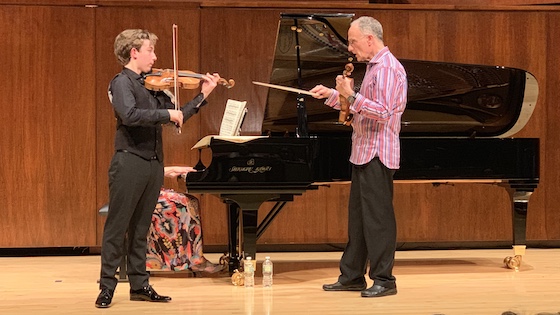 Next, Jacque Forestier played the first movement from Mozart's Concerto No. 5 in A major, playing very cleanly and well. I noticed before the end of the first page that he probably had not seen the Urtext (Mozart's original music), because...

...it's obvious. Also, he played the Joachim cadenza, which, while it was played by nearly everyone back when I was a student (a while ago), is no longer played as frequently. Forestier played beautifully from this edition, but in a situation that is a competition, or even a college audition, it's something that might seem noticeably out-of-date. Kaplan, for example, noticed.

"First of all," Kaplan said, "write your own cadenza. You'll learn a lot about the piece. Also this cadenza (the Joachim) has developed its own strange traditions."

Kaplan demonstrated a few places where performing traditions have pushed Joachim's cadenza themes pretty far from concerto themes from which they were drawn.

"This is late 19th century interpretive stuff that has gotten everything over-Romanticized," Kaplan said.

Kaplan set down some rules for writing one's own Mozart cadenza: The cadenza can be in the style of Mozart. Or, the cadenza can be in your own 21st-century style. But it should not be in a Romantic-period style. "It should be appropriate to Mozart's time or to your time, but not to Joachim's time," he said.

He also suggested that Forestier "get a Barenreiter (urtext edition), so you can become more aware of a Mozart bowing," he said.

He pointed out that Mozart was a great improviser, and that the "Allegro aperto" ("aperto" meaning "open") should sound like a "glorious improvisation."

Kaplan also invited Forestier to imagine this idea: What if Mozart were not a genius? How would have have written the opening Adagio? The sequence in the Adagio could have been written in a predicable and traditional way, but Mozart wrote it in a surprising way (for example, coming from the top in the third figure, m. 42, after coming from the bottom twice before). Even the very idea that the orchestra has an introduction that sounds more like an opera overture in the beginning, then it stops completely for a slow introduction in the solo violin -- "It must have been unbelievably astonishing back then," Kaplan said. "It's not astonishing to us because we know it." Knowing exactly what was surprising and where it strays from convention can help the performer convey that feeling of surprise. 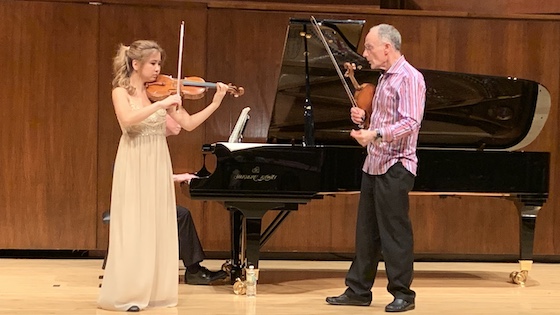 Kaplan had a straightforward request: use more bow. "And then when you are finished thinking about using more bow, use more bow!" he said.

To that end, he had her play the crescendo in this passage:

First she played it in simplified form, playing only the first note of every group, with the intent of opening up the sound and using more bow. Then when she played the same passage with all the notes, the effect was definitely noticeable.

"That's about 14 times more sound!" Kaplan said. And when it comes to the top of the crescendo, "really enjoy that."

If music is composed of rhythm, harmony and melody, the main ingredient in this movement is rhythm. "The rhythm has a kind of tightness to it," Kaplan said. A triplet passage like the one above is a place where that tightness gives way to something different. "You can use that tightness to realize a greater amount of space."

Last on the program was Kenneth Naito, who played the first movement from Saint-Saëns Violin Concerto No. 3 with pianist Pamela Viktoria Pyle. 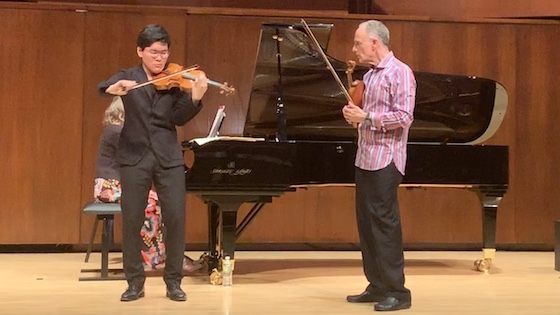 Kaplan's first observation was that Naito watch his tempo changes more closely, to make sure that they are organic enough for either a pianist or an orchestra to follow them. He said that if he ever gets a chance to conduct an orchestra, this can be helpful for developing a good sense of pulse because "you have to bring the orchestra with you, and if the orchestra is not with you, you'll know. You'll be aware when something you are doing is not organic."

For the big strong opening of this movement, Kaplan suggested using more bow speed over bow pressure, as it sends the sound out. Also, he said that the chords that follow should be treated melodically.

He also wanted more "swing" in this passage:

Kaplan asked for Naito to think of the passage in two, and this suggestion seemed to help the most in getting that feeling of "swing" into it.

"It's a problem when you feel something different from the way the composer writes," Kaplan said, adding that for himself, "this seemed like a tremendous inconvenience. But it's actually a wonderful opportunity," because it forces you to really examine the composer's language and figure out where the discrepancy is, then solve it.

I was taught to play the first 2 notes quickly then emphasise then second 2 .

Of course I support re-interpretations. It keeps music dynamic.

June 5, 2019 at 08:39 PM · I very much enjoyed your article. I will be thinking of getting urtext versions of baroque pieces in the future as begin to learn them and practice them! Very informative. Thanks