It's not a thought that floats into my head every day, especially after five days of "Practice your scales!" at masterclasses and pedagogy sessions at the Starling-DeLay Symposium on Violin Studies at The Juilliard School. But on Friday, a wide-ranging recital at Paul Hall by violinist Philippe Quint and pianist Peter Dugan gave the 200 violin teachers and student artists in attendance a chance to put down our pencils, stop practicing for a few hours and enjoy some artistry. 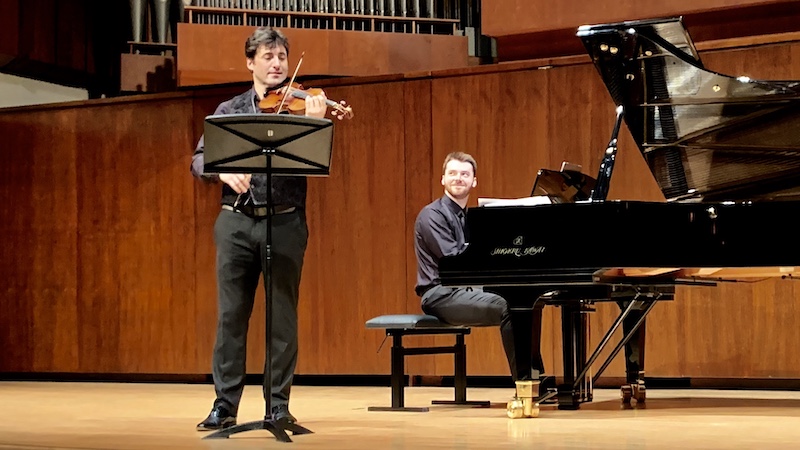 It all started with the beauty, synchronicity, the fluidity of that swirl of scales in the first movement of Beethoven's "Spring" Sonata (No. 5 in F major). That was the first piece in an appealing program that also included Brahms Sonata in A major, Bartok Rhapsody No. 1, Piazzolla's "Le Grand Tango" and several works from Quint's latest album, Chaplin's Smile.

Quint is a former student of the late Juilliard violin pedagogue Dorothy DeLay, whose legacy is a central theme of the Symposium. Quint also is a soloist who performs internationally with top orchestras has recorded 17 albums, many of them Grammy-nominated. He plays the 1708 "Ruby" Stradivarius, on loan from Chicago's Stradivari Society. Pianist Dugan, also a Juilliard graduate, is a guest host on NPR's From the Top and founding creator of Operation Superpower, an outreach opera for children.

Together they proved a well-synchronized team - the intricacies of the first movement "Allegro" of the Beethoven Sonata fit together like clockwork. As many times as I've heard this piece, this time as Quint played the slow-motion arpeggios that end in a sforzando burst, I had a delightful image of someone sneaking up and surprising me, "BOO!" In the second movement Quint brought out how vulnerable these simple melodies can be, playing with a pure sound mixed with a nice range of colors. The quirkiness of the third-movement rhythms was especially gratifying, played by two musicians who coordinate so well. Dugan brought out the playfulness in the fourth movement, which kept both musicians jumping between moods: delicate and cute, then driving and aggressive.

Brahms Sonata in A was well-paced, with lines moving smoothly between two instruments.

The Bartok Rhapsody No. 1 is a juicy piece. Quint played with full commitment, big sonorous double-stops, lush vibrato, and tons of energy. This piece has moments of whipped-up intensity that then just scamper away, as well as simple moments that somehow veer into countless layers of complexity. It was a wild ride that left Quint's bow with multiple broken hairs.

The change of mood was clear for Piazzolla's "Le Grand Tango" -- Quint's movements were suddenly fluid with those Argentinian rhythms and slides. Special effects were like tickles -- a little behind-the-bridge scrubbing that sounded like a happy frog, glissandi all over the fingerboard, catchy rhythms. A wicked octave run went whipping by in the piano - Dugan nailed it.

To conclude, Quint played selections from his latest recording of music by the actor-director-violinist-composer-cinematic wonder Charlie Chaplin. Quint smiled as he played the old-fashioned melodies in The Kid Fantasy, based on Chaplin's score for the 1921 American silent film, The Kid. The music gets into a sultry groove, and for me it occasionally brought to mind an old Western saloon. The humor in this arrangement by Leon Gurvitch had the audience laughing out loud, and while the music was cute, it also was full of great tricks for the violinist, which Quint pulled off with ease. A lovely way to end the recital.

Before playing his encore, Quint said a few words about his former teacher DeLay, describing how he came to New York from Russia in 1991, not knowing any English. DeLay accepted him, though she did not accept if he showed up to a lesson wearing red socks or if he had failed to shave ("She sent me home once!") He said he wished she could hear his Chaplin album, as she was always a teacher who supported students in doing something creative and different. And with that, he dedicated the last piece to DeLay, "Smile":