Midori first captured the world's attention as a child prodigy, playing her debut with the New York Philharmonic at age 11 and soon after hitting the international stage as a soloist and recording artist. But she has retained the world's attention over a 30-year career with her continued artistry on the stage, her dedication and success as a teacher, and her outreach efforts such as Midori and Friends. She has recorded extensively, most recently the Sonatas and Partitas by J.S. Bach. She joined the faculty of the Curtis Institute of Music in 2018, after teaching 14 years on the faculty of the University of Southern California's Thornton School of Music, where she served as distinguished professor, department chair for eight years, and holder of the Jascha Heifetz Chair in Violin. Midori is a former student of Juilliard pedagogue Dorothy DeLay, for whom the symposium is named.

At her master class at Starling-DeLay Symposium on Violin Studies at The Juilliard School on Thursday, Midori tended to work not toward immediate perfection, but toward communication and deeper understanding. Her guidance, while useful and specific, seemed aimed at leading a student to attain results on his or her own. She regularly acknowledged a student's achievements, never minimizing nor exaggerating them. Her praise was careful, accurate and unhurried. She delivered criticism with a smile. She did not seem to be "fixing problems"; instead she seemed to be awakening ideas.

The master class began with the first movement of Niccolò Paganini's Concerto No. 1 in D major, played by Noelle Naito, with pianist Pamela Viktoria Pyle. Naito's playing was decisive and tidy, and she threw in a cadenza I'd never heard before, full of double-stop harmonics, left-hand pizzicato, tenths, octaves and more. (Naito told me later that the cadenza was by Rachel Barton Pine.)

Midori congratulated her on her performance, adding that "to play at your level, you must have put in so much work."

Nevertheless, Midori had a question for her to explore: "How do you listen?" 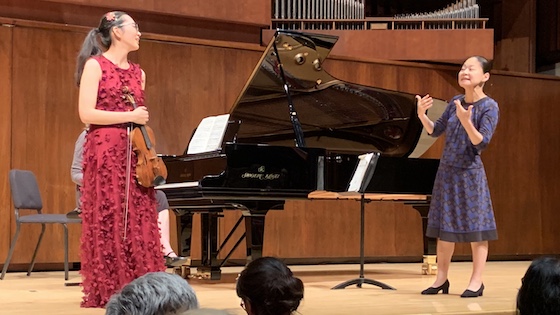 "What do you listen for?" she asked. A player can listen for intonation, accuracy, sound quality -- but this is mostly for assessment. Midori wanted her to go beyond assessment, and listen for musical reasons. Midori described several ways to listen for music.

Midori then spent some time, pointing out these kinds of listening opportunities in the music. For example, when the piano ends its long introduction with a decisive chord, "how much piano do you want to hear, before you start?" Midori asked. "Can you use the space after the piano stops to "up" the expectation in the listeners?"

And when entering as the soloist, are you listening? "Is it just to see if it's in tune, or do you have a color in mind?" And if you do have a color or character in mind, "how long do you want to stay in that character?" When does it change, and how?

When playing chords, what are you listening for? Naito suggested maybe she should play the chords longer, and Midori went deeper, "Did you want it longer, or to hang in the air longer?"

Naito tried a little of both, and her chord produced a noticeably different effect, sounding more expansive.

Entering for a more gentle passage, Midori advised her to "listen and feel in your imagination, before you play that note."

Midori had ideas for fast passages as well: "Listen to your fast notes, not just to be in tune, but listen to the music inside those notes," she said. This changed the way Naito played the passage, even prompting her to shape more phrases in it.

And how about the piano? At one point, in a passage that actually had pretty sparse piano accompaniment, Midori had Naito listen to Pyle play the piano part by itself. "Feel that phrase from the orchestra," Midori said.

When a performer does all these things, "it feels so much more musical; it doesn't feel like you are just simply playing the instrument well," Midori said. "It's about polishing your ideas, making them clear, and then executing them."

Next Caecilia Lee played the first movement of Henryk Wieniawski's Violin Concerto No. 2 in D minor, with pianist Evan Solomon. It's a movement with melodies that return throughout. To help her organize which appearances of these melodies are most important, Midori suggested finding them and coming up with a plan. Where are the high points, and where are the low points? "You need to have this kind of organization in mind," Midori said. 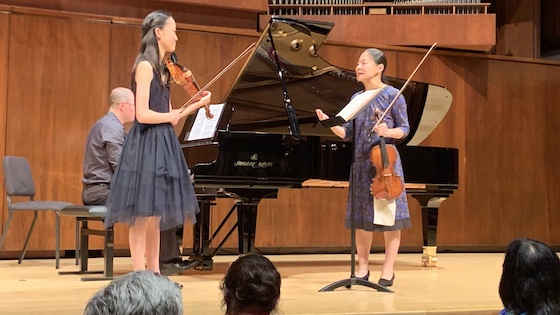 They looked at the music together, concluding that the opening melody appears three times. They decided to try to make the second appearance of the melody, which occurs shortly after the first, a little softer.

Lee did this well and Midori recognized her efforts. "When you carry us through with these contrasts, it has a powerful effect," Midori said. I noticed that Midorii gave Lee several more times to play this part and implement that idea -- even when they were working on other things -- and Lee succeeded each time.

Another concept Lee took in well was the idea of leading, following and pulling, in relation to the piano.

"First let's try to lead the direction, so that the piano will come with you," she said. This led to an assertive way of playing, on the brisk side. After that they tried something else, "Now try pulling the piano," Midori said, and Lee played with more spaciousness, slowing things down.

Neither way is right or wrong, but "it makes a difference in how the music comes out," Midori said. In fact, it's possible to do a little of both, all on the same page of music. With this vocabulary established, Midori coached Lee through a longer passage of the music, saying "lead...now pull...now lead..."

Next Enrique Rodrigues played the "Nigun" from Ernest Bloch's Baal Shem, nailing the notes and playing with great sound, with Pyle a fully committed partner at the piano. 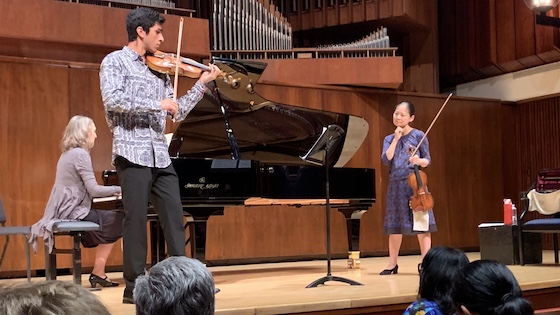 Afterwards, Midori asked him for his thoughts about his own performance. He said that having better picture in his mind would help him in playing this piece. Instead of simply giving him that picture, Midori reflected that since he feels that this would help, he should indeed do that and "I leave it to you to come up with that picture."

Her priority was to address his sound, which was "beautiful -- a little too beautiful."

This piece needs a little more of the gritty side of human existence, she said, as well as little more heat and contrast.

"Feel the mood, and set the mood with your entire demeanor," Midori told him.

She also wanted him to be very specific about projecting sound.

Some of this piece is meant to sound improvisatory, and she pointed out when he played in a way that sounded too prepared. "You are making this up, right? Wander, wander, you know too well where you are going!"

"I can tell that you feel this drama, but you need to feel it physically. You need to take over the room," she said. "Don't play the music, be the music."

In fact, "I want you to top the piano," Midori said, to outplay the piano. She offered him ways to do that: with energy, gesture, taking time, using direction, tension."

After that instruction, she allowed him to play uninterrupted for several minutes so that he could try it. Afterwards, she pointed out that a hall is different from a practice room, and in a larger hall the musical message can get a little lost. "You have to translate, from practice room to a larger hall."

Next Maya Buchanan played Otto Respighi's Sonata in B minor, movement 1, a piece full of quirky rhythms and syncopation, with Evan Solomon at the piano. 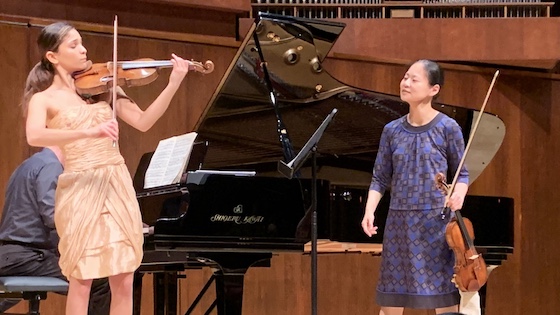 "The way that (Respighi) uses rhythm, results in a certain kind of impression," Midori said. What was Buchanan's impression? "It's a little unsettling because of all of the syncopation," she said. Midori added that the music sounds perhaps a little tipsy, lost or uncertain.

With that kind of rhythmic complexity, it's important to recognize where the piano and violin lines up and define "the places you really want to lock in," and then be able to have freedom in between.

Midori wanted Buchanan to bring out the singing quality in a big melodic passage, but she wanted her to do it in the bow hand. So as an exercise, Midori told her to take her vibrato away, "so you are going to try other ways to make it happen."

Buchanan started, then said, "Oh, this is hard!"

"You are doing well," Midori said. "You are using bow speed, but there is something else you can try, which is the way you drive the rhythm."

Still not playing with vibrato, Buchanan focused on the push and pull of the rhythm, and this worked well. 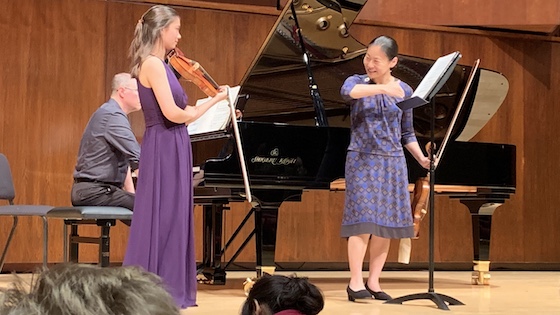 "This is such a detailed work," Midori said. "You play with such energy."

For this movement, Midori focused on finding clues from the score, to help with interpretation.

For example, "The way Bartok writes slurs is not really about bowing," Midori said.

One might choose to use more bows that those slurs would indicate. But the presence of the slur implies a strong sense of legato.

"Regardless of the bowing you use, I want it to sound how it's written," Midori said. "They're not bowings so much; they indicate the way you articulate the music."

Midori also warned that it's important to keep a very steady tempo in this movement, to drill it with the metronome, because if you rush it when you play with an orchestra, "the result is really a mess."

In the end, Midori told her to "really scrub this down," to find the details in the score and then find ways to create that sound on the violin. 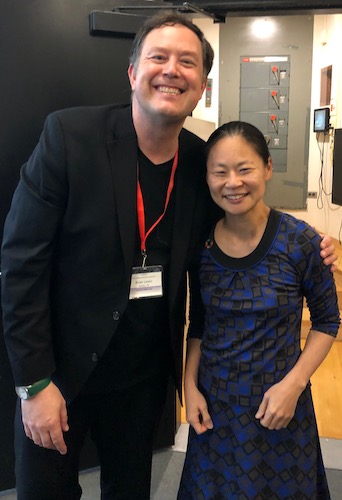 May 31, 2019 at 11:34 AM · Thank you so much for these detailed, informative reports of the masterclasses. You must have had a wonderful time being there.

June 2, 2019 at 03:09 AM · Look at the size of Brian Lewis's hands compared to Midori's. Anyone who thinks their hands are too small or too large for the violin can put that idea safely to rest.

June 2, 2019 at 03:16 AM · Love Midori! She's one of the few truly great violinists I've had the opportunity of seeing live in recital. Also her wonderful recording of the Mendlessohn was one of my earliest CD purchases way back when. She always strikes me as one of the most interesting musicians around, and I'm envious of your opportunity to see her teaching, Laurie. Thank you for this report!