Violinist Patinka Kopec insisted, persisted and kept the energy high during her master class Wednesday at the 2019 Starling-DeLay Symposium on Violin Studies at The Juilliard School.

Born in Slovakia, Kopec studied with DeLay and Ivan Galamian at Juilliard, where she earned both her Bachelor's and Master's degree. She has been Professor of Violin and Viola at the Manhattan School of Music for more than 30 years and was once a teaching assistant to DeLay at Juilliard. Kopec also is a co-director and teacher at the Pinchas Zukerman Performance Program; a faculty member at the Heifetz International Music Festival; a teacher at the Perlman Music Program; and director of the Young Artists Programme at the National Arts Centre in Ottawa, Canada.

Violinist Kenneth Naito opened the master class with an excellent performance of the fifth-movement "Rondo: Allegro" from Édouard Lalo's Symphonie Espagnole with pianist Pamela Viktoria Pyle. He played with a nimble left hand, accurate intonation and mastery of the notes. Kopec listened very actively, bobbing her head to the music, air-bowing, and walking on and off stage to observe his playing from various angles.

"I would like to your sound to have more punch," she said, and the first thing she did to help achieve that was to re-position him on stage, so that he was standing right in front of the piano, with his violin angled sideways to optimize projection of sound.

Suggestions came in quick succession, and if Kopec needed to throw in another, she clapped to make Naito and Pyle stop playing. 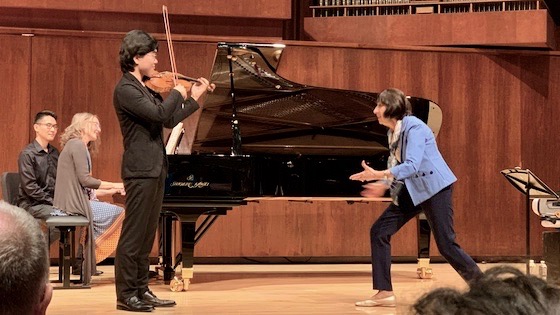 "This piece repeats itself so many times, play it differently each time," she said.

Kopec leapt on every detail, and if Naito had been at all complacent before, she was certainly drawing more intensity from him now.

"YEEES!" she almost sang, when he showed that intensity. She told him to take time between gestures, "You need anticipation, or it is breathless," but then after that pause, "Grab it, now GO!"

Next, violinist Audrey Park played the second movement from Jean Sibelius's Violin Concerto in D Minor, creating a nice, rich sound. She ended the movement with great care, a moment of poignancy.

After Park's performance, I confess I was a bit taken aback when Kopec said, "I don't hear passion." I did! Then again, Kopec had a way of drawing even more passion out of these young musicians, who are obviously starting from a point of strong musical intuition and ability.

Kopec started by focusing on the first note of the movement.

"When you start that D, what kind of sound are you waiting to hear?" Kopec said. "I didn't feel enough involvement with your fingers. Get your vibrato ready, so when you come in, your vibrato is already going."

As the first line unfolded, Kopec asked for "more, more, MORE...!" and indeed Park found more, and it created a longer musical line. 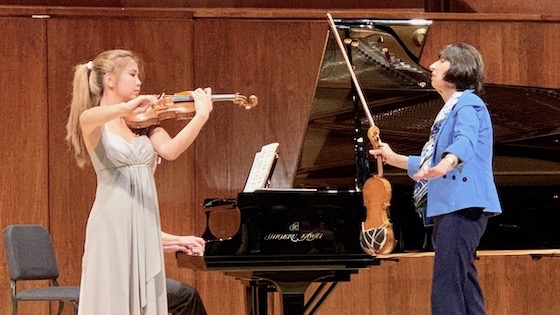 "You had a beautiful sound before, but now you have a line," Kopec said. She continued to narrate as Park played: "More! To the top! Now release, now a different color..."

"I want you to look more at the hairpins," the crescendos that build sound and the diminuendos that let it go. "Now more, now less."

They worked on the double-stops that build to the climax of the movement:

"When we have double stops and we really want them to ring, play closer to the bridge," Kopec said. She suggested taking more bows for the ascending double-stops, an idea originally from DeLay.

Then at the top of the phrase, "You have finally arrived, let me know! I have to feel like you are fighting for your life!"

Providing a change of pace, violinist Anna Wei next played two movements for solo violin: the Allegro assai from Bach's Sonata No. 3 in C major, followed by Paganini's Caprice No. 7.

Wei's Bach was a satisfying swirl of notes, played with an awareness of dynamics and allowing Bach's clever voicing to poke out from the surface.

"There are so many ideas about how to play Bach," Kopec said, following her performance, "the truth is, is anybody right? Is anybody correct?" 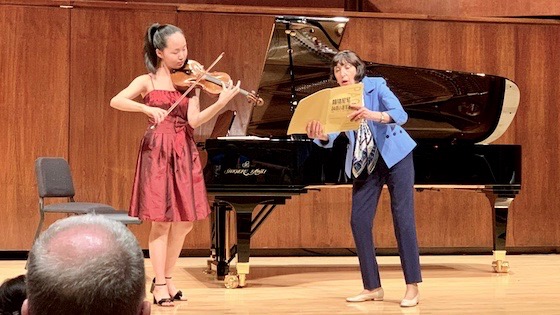 Kopec reduced Bach to three important elements: harmony, melody and rhythm. "To me, rhythm is the pulse, it's our heartbeat," Kopec said.

"It takes a lot of control, in order to move the bow back and forth to different sounding points for your dynamics," she said.

Wei then performed Paganini Caprice No. 7, with a fast and clear up-bow staccato, nice dynamic gradations, and really relishing the double-stops.

After her performance, Kopec focused on bringing out more drama in the music.

"Paganini has different characters in here," Kopec said, "Can your show us more of that?"

Kopec pointed Wei back to the score for the beginning of the movement, where there were accents that had gone missing, and they worked on bringing those out.

"I need to hear so many layers of dynamics in that opening," Kopec said.

Kopec worked on more solo Bach with Enrique Rodrigues, a high school junior who played the "Adagio" from Bach's Sonata No. 1 in G minor.

She explained to Rodrigues that this movement is in "Sonata Allegro" form, with an exposition, development and recapitulation. ("It absolutely is not," whispered someone behind me in the audience. We violin teachers are an argumentative bunch, I must say. I understood both points: there is an opening melody, a middle section that develops it, and then the melody does return, if in C minor rather than G minor. That different key business is the sticking point, I believe. It would be an excellent thing for us to all argue over, please leave your comments...)

At any rate, Kopec wanted more tension on important chords and more release on less important ones. For example, the opening G minor chord, which defines the key for the movement: "Why do you play it so gently? I want to hear a good chord, it's G minor! You have to be very affirmative."

And then she told him how to do so: "Sit on that bass longer. Start from the string. Don't play it like a question mark! Play the top longer! Then when the scale goes down, relax it."

He played the entire opening of the "Adagio," and she coached him: "Tension. Release! Tension! Release! Sustain! Bass!" When he stopped playing she asked, "Do you see what I'm tried to do?" He affirmed that he did understood; she was showing him those important chords. 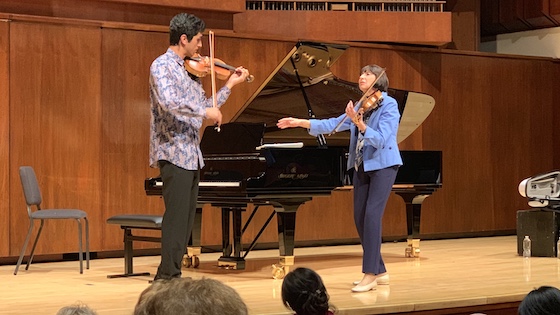 "That doesn't mean every chord in Bach will have tension; you will have to analyze it," she said. Analyzing might involve going to the score - or going to Youtube.

"Now you can go to Youtube and listen to 20 people play this piece," Kopec said. "Just open your computer, it's amazing what you can learn if you are motivated."

Last on the program was Jacques Forestier, who gave a very impressive performance of the lesser-heard "Carmen Fantaisie Brillante" by Jenö Hubay. (More often played are the Carmen Fantasies written by Pablo de Sarasate and by Franz Waxman. "This one is probably the hardest, it goes all over the place," Kopec said.)

Kopec, who had taught Forestier before, had only one complaint: his new shoulder rest. It's a rest with a big curl on the left side, and he said he'd been using it for just a few months.

"Certain shoulder pads make the instrument go sideways," Kopec said, theorizing that this one was causing that problem. If the violin slips forward, sloping sideways instead of lying flat, this causes problems for the left arm. Instead of having room to shift around the instrument, the arm is forced forward and inward, creating an awkward angle.

To fight this falling-forward tendency, Kopec physically held up his scroll as he played the piece again. 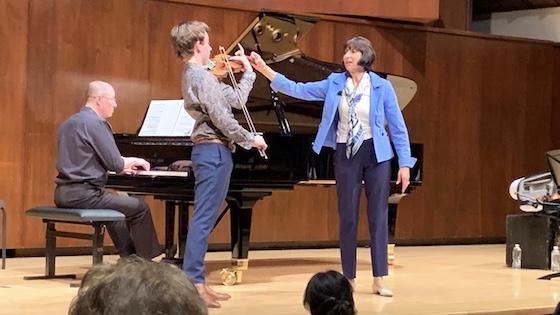 Eventually she stopped actually holding up the violin, but she continued to remind him to hold it up himself, if it started drooping at all.

"When a passage starts to feel awkward or difficult, check to see if your posture has started to change," she advised him.

"Kopec reduced Bach to three important elements: harmony, melody and rhythm." It's easy to say, "Master of the obvious!" But it's good advice, I think, to always return to the foundations of musicality, because we tend to get lost in the filigree.

I too think that it is good advice on Kopec's part - we often get mired in the details and lose sight of the bigger picture.

May 30, 2019 at 02:29 PM · Laurie, I love this time of year when we get to read your coverage of the various master classes! I particularly enjoyed the anecdote about the Sonata Allegro form. Just goes to show how many things in music we can argue about. In the spirit of Paul's comment above, one of the 2013 Starling-DeLay participants, William Shaub, is concertmaster of our orchestra here in Knoxville and doing an absolutely amazing job on all fronts, including having his own Concertmaster Series. I suspect we won't be able to keep him much longer!

May 30, 2019 at 03:18 PM · Love PK! So glad the symposium was finally able to get her! No one today teaches the right hand and organizes your playing like she does!