May 29, 2019, 1:25 AM · NEW YORK - "Musical intention should always guide our technique," said Kathleen Winkler at the first masterclass of the 2019 Starling-DeLay Symposium on Violin Studies Tuesday at The Juilliard School. "Sometimes students wrestle with technique so much that they never get to the musical essence of the piece."

Winkler is a Professor of Violin at Rice University's Shepherd School of Music, holding the Dorothy Richard Starling Chair in Violin there and also at the Music Academy of the West, where she is a member of the artist faculty in the summer. She earned her Bachelor of Music and Performer's Certificate at Indiana University and her Master of Music at the University of Michigan. She has previously taught as a faculty member at Oberlin Conservatory and The Cleveland Institute of Music; and as a visiting professor at Indiana’s Jacobs School of Music and the University of Southern California’s Thornton School of Music.

On Tuesday she emphasized the importance of putting technique at the service of musicality, and also frequently sat down at the piano to make points about harmonies on the violin.

Christina Jihee Nam began the master class by playing part of the first movement of Jean Sibelius's Violin Concerto in D major, with Pamela Viktoria Pyle playing piano. She played with a pure and clean sound, and great intonation. In fact, I wondered -- as I often do at a master class that showcases such talented young artists -- what is there left to say, in a performance so good?

Winkler had the answer, right away.

"How do you teach a student who is already so good, who already has good intonation and technique?" Winkler asked, as if reading my mind, if not many others in the room. "That is actually the greatest place to start teaching, because that is where artistry begins."

Honing in on this idea of artistry, Winkler told Nam that "you don't want to play exactly what is on the page." For example, "for the first two lines of the Sibelius, there aren't any directions except for mezzo forte, and dolce espressivo. But within that, some notes need to be more important than other notes, otherwise none are important."

"What is the first juicy note for you?" Winkler asked. "What is the note that pulls at your heart?"

They agreed the first F in the piece, right at the beginning, already has some pull. But it takes some effort to make it special -- it has to be brought out in the left hand with vibrato, and in the right by working the string properly so that it "spins."

"Is your body feeling the openness of that note, or are you rigid?" Winkler asked.

How do you find it?

"There are always messages in the music, you just have to be a good detective." 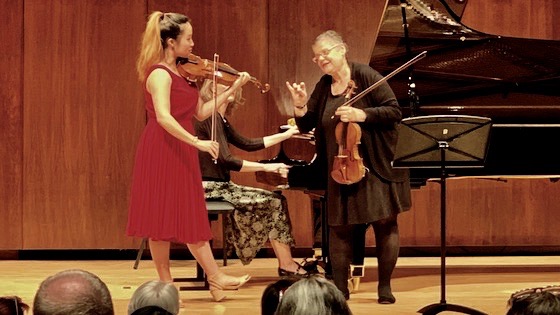 With that, Winkler had Nam play the whole beginning of the piece, and as she did, Winkler directed every gesture -- pointing to the ceiling, shaking her hands, crouching -- acting out all the drama to elicit it in the music. Then she pointed out that Nam might have entirely different ideas than the ones she just demonstrated.

"You don't have to do anything that I say, it may be contrary to how you feel," Winkler said. "But you have to custom-make your own interpretation." And that version should have style and high polish.

The markings in the music simply aren't enough without that human-crafted, human-felt individual interpretation.

"Forte - it's a very primitive marking," Winkler said. "I guess it means 'loud,' but 'loud' doesn't move people to tears!"

Winkler had beautifully specific and fitting ways of describing musical gestures and ideas in the Sibelius, saying one section needed to sound "smoky.", Another entrance in the middle of the chaotic cadenza should suddenly found "hollow and lonely." Another part needed to be "searching. Look for something, don't be found, look!"

Next was Noelle Naito, who played two solo violin pieces -- the Siciliana from J.S. Bach's Sonata in G minor; and Nicolo Paganini's Caprice No. 15 in E minor.

After Naito played the Bach, Winkler pointed out that the movement seems to tell a story, and that "it's a gentle story, a gentle movement." In a G minor sonata, it is the only movement in the relative major (Bb major) - "a breath of fresh air." Also, it's rather disjointed, jumping around quite a lot between two voices and offering only snippets of melody.

"I think Bach meant to write this as a violin duo, and he made a mistake and wrote it for one violin," Winkler said, eliciting a good audience chuckle.

But in all seriousness, it pretty clearly has two voices, and it's easier to find the music in it, when one plays it as a duet. So as an exercise, Winkler played it with Naito as a duet, separating the lines and instructing her to make those melodic snippets as musical as possible and shape the phrases. 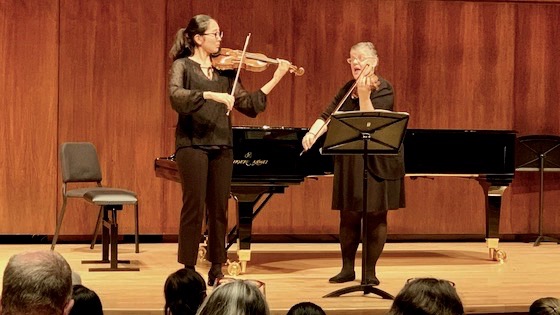 All the back-and-forth between voices involves a lot of string-crossings and so Winkler let Naito in on a trick to help: "At the end of the old bow, be on the new string." If you are going down-bow on an open "G," for example, and then switching to open "E," keep the bow moving as you roll to the E
on the down-bow, and then only after arriving at the E, go up-bow. For that crossing, you "take the foot off the gas," meaning that you let up on the pressure, but still continue the movement. Also, take time for string crossings, "don't chase the string-crossing."

Naito then performed the Paganini Caprice No. 15, which went very well. The piece is full of octaves, up-bow staccato and string crossings.

In pieces as hard as Paganini caprices, "the left hand often forgets that it has a musical component to it, because it's so worried," Winkler said.

One solution is to let the right hand do its part. For example, the Posato beginning involves octaves and a lot of articulation. Winkler said to keep that articulation in the right hand, "and that is how you keep your left hand relaxed."

Playing octaves, it is easy to jerk the hand up and down the fingerboard. "If the shift has a jerkiness in it, it's impossible to be melodic and to play in tune. So get the jerk out of the shift. You want your left hand to have a different agenda than the right hand."

Also, to get to the musicality in this movement, Winkler had Naito play the beginning with no octaves. "Play one line, in first position." Winkler sat down at the piano and improvised an accompaniment to this solo piece, to help her find the music and relax into it. "Accompaniment always helps," Winkler explained, "but unfortunately these are written for solo violin."

Next Caecilia Lee played "Polonaise de concert in D major" by Henryk Wieniawski, with Evan Solomon playing piano. She played with flair, and after her performance Winkler praised her "courage and style." 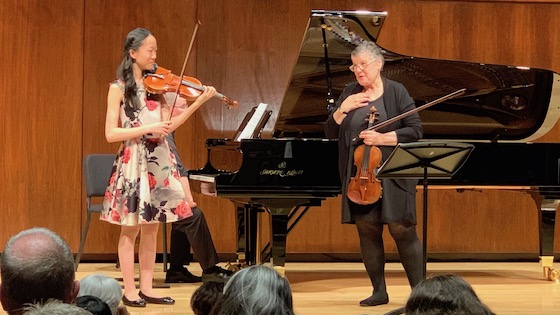 The piece has a lot of re-takes and Winkler encouraged her to think of this motion as circular, as that is the way our bodies move, rather than "back and forth."

They worked quite a lot on landing a very high note; this high B to be specific:

Winkler recommended waiting a while on the open A before the high note, then just nailing it. She compared that high-note leap to the drama of a weightlifter preparing and then hoisting a huge barbell over his head: pant-pant-pant...."HUWWAAAH!" as he lifts it.

Basically, you just have arrive at the note before and then go for it, with no fear. Hesitancy and do-overs are the enemies of nailing that note. "You won't get it until you're willing to miss it," Winkler said.

Rachel Aina Call played the Allemanda and Sarabanda from Bach's Partita No. 2 in D minor, a solo work with no piano accompaniment. Winkler pointed out that the Allemanda, with no double-stops, is a single-line movement. Without chords in the piano or in the violin, where is the harmony?

"The pianist bails us out quite a lot, but with this, there's nothing to tell us what to do," Winkler said.

Nonetheless, "this movement is driven by harmony -- all these movements are driven by harmony," Winkler said. Implied are all kinds of chords and harmonies, including chords with tension such as 7th, dominant or diminished chords. And Bach uses techniques such as sequences, suspensions and resolutions to move the music forward. So even though it is not explicit, one must find where these harmonies are and understand what function they serve in the music.

She asked Call about the first note of the piece: "How many notes are in that chord?"

"One?" she said. (It's pretty much what I was thinking, too, if you look at the music, there is one note!) But Winkler was referring to the implied D minor chord that starts the piece.

"I think you're not sure where the harmony changes," Winkler said, and then she sat down again at the piano. "I'm going to play accompaniment with you that I just made up." 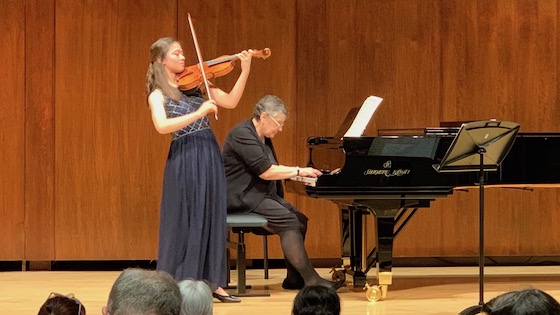 Winkler played the chords that are implied in that single line of music, while Call played the Allemanda. "A lot of times, Bach is outlining harmonies and arpeggios," Winkler said. "There are big cadences, there are destinations."

Playing this piece with a piano chords at each harmonic change would certainly be helpful and illuminating for anyone, I'd love to try it myself! 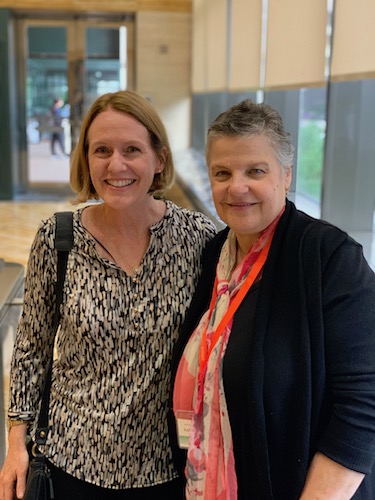 May 29, 2019 at 06:25 PM · Interesting article. Makes me totally rethink the Allemanda in Bach’s partita #2 and other pieces that knot your fingers in difficult string crossings!!

It is the best type of your posts.

I love how you write these mini-reports from master classes.

May 30, 2019 at 03:07 PM · The advice about how to smoothly execute a bow change combined with a jump across the strings interestingly suggests that the modern bow is being used in a way that is emulating the behaviour of a baroque bow, namely that with a baroque bow the sound dies away as you approach the tip, unless you deliberately override what the bow is naturally trying to do.

My preference is a baroque bow for a lot of my orchestral playing and am well aware that in order to keep the volume of sound constant along its length, when required, I have to use a little more pressure as the tip approaches.