May 28, 2019, 10:10 PM · Violinists are calling it "the end of the era" at the University of Southern California Thornton School of Music, after the death of violinist Alice Schoenfeld. She dedicated the majority of her 98-year-life to the art of playing and teaching the violin, having trained multiple generations of musicians over her nearly 60-year tenure as Violin Professor at USC. She died on Saturday in Pasadena, Calif.

Alice and her younger sister, cellist Eleonore Schoenfeld, began teaching at USC in 1959. Eleonore died in 2007, at age 81. For most of their lives, the sisters lived together, performed together, and taught together. They were known for their fastidious attention to their students' playing, personal presentation and life skills. 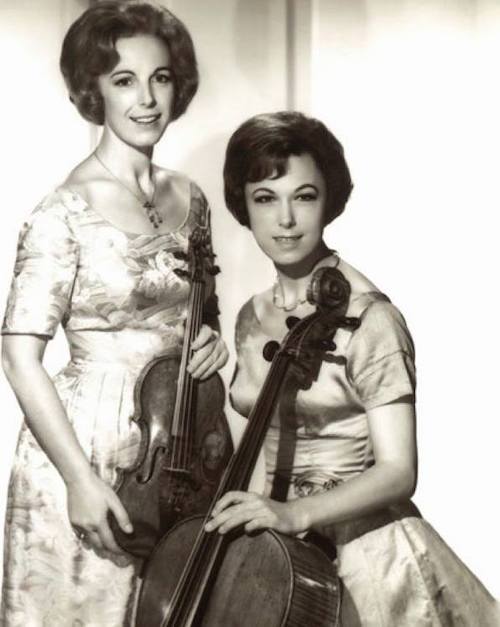 Alice Schoenfeld, with her sister Eleonore.

"I have been flooded with childhood memories at the passing of Alice," violinist Anne Akiko Meyers told Violinist.com of her former teacher. As her student, "you were the center of her undivided attention, which was an incredible life experience for a young student. A great lady, she and her sister carved the path and laid a strong foundation for many who continue to this day to carry their legacy with their inspired approach to music-making and respectful traditions."

Born in 1921 in Yugoslavia to a Polish father and a Russian mother, Alice showed musical talent at an early age, prompting her parents to move the family to Berlin so she could study violin with Karl Klingler, a former student and close friend of Joseph Joachim. (Klingler's other famous student was Shinichi Suzuki, who went on to establish the famous Suzuki Method.)

Alice debuted with the Berlin Philharmonic at age of 10, and she continued performing as a soloist and recitalist in Germany, also forming the Schoenfeld Duo with her sister. Collectively the sisters made hundreds of recordings of solo and chamber music literature for television and radio stations throughout Europe, the United States, China, and Australia.

After immigrating to Los Angeles in 1952, the sisters continued to perform, gradually focusing more and more of their energies on teaching. Neither sister ever married. "Suitors were out of luck," said a 2012 article in the LA Times. "(Alice) said she decided early on that her musical commitments wouldn't mix with having a husband or children. Eleonore dipped a toe in those waters, then withdrew it. 'My sister was engaged to a lovely gentleman, a professor at Stanford,' Alice said, but she eventually called it off. 'She never felt it would be fair to me or herself, or her husband.'"

In talking about the donations with the LA Times at the time, she said, ""Everything I do is out of love for my sister."

In 2013, with the the help of her former student Suli Xue, Alice co-founded the Alice and Eleonore Schoenfeld International String Competition in Harbin, China, a biennial competition that focuses on three categories: violin, cello, and chamber music.

"I remember playing for her in her living room when I was seven years old and moving from the Mojave Desert to La Canada (Calif.) to study with her," Meyers said. "I immediately went deep into study with solo lessons from Alice and chamber music studies with her sister, Eleonore." Studying with the Schoenfelds was intense; at one point Meyers had two to three lessons every week with Alice, plus a chamber music lesson with Eleonore once a week. 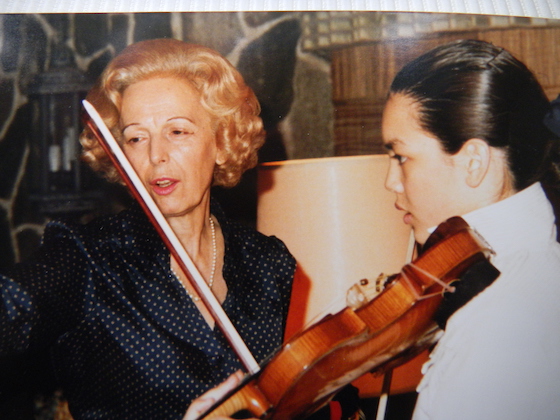 "She was meticulous in her approach, saying things like, 'Play the opening chord with the same color as the luster of a pearl' -- while wearing pearls," Meyers said. "Strict, suffering no fools, she would drink chamomile tea, eat chocolates and we would have lessons that sometimes felt like an eternity, practicing the opening of the Mozart Concerto for months on end to get to the core of the sound, and perform it with great polish. She treated me not as a young student but as an equal with her sophisticated musical language and attention to color and sound."

Meyers said that Schoenfeld drove her to competitions and auditions and that she "was on stage till the last second to see that everything was just right when we were on the "Tonight Show with Johnny Carson,' until the stage techs were yelling for her to get off the stage."

She also taught her to bow properly and to dress the part "white for Mozart to show purity, blue for Mendelssohn, red for fiery Lalo, fishnet stockings for Sarasate -- at age 12!"

"Her sister encouraged eating a banana before performing, which I still do to this day, taking a nap to have 'fresh shiny eyes' and being the consummate professional for any performance or interview," Meyers said.

Linda Wang, currently Professor of Violin and String Chair at the University of Denver, is another former student who remembers Alice as a teacher completely devoted to a life in music. "I spent many of my formative years together with her, and she has been an extraordinary mentor and teacher to me, someone I could always turn to for advice," Wang told me. "Our time together influences my studio teaching to this day. I can remember long discussions on details of the score, style, technique and interpretation. She always encouraged critical thinking and finding one's own musical voice through the countless possibilities of color, dynamics, articulation, phrase."

She remembers one extensive lesson, spent exclusively on the opening two lines of Chausson's "Poeme."

"Drawing upon her vast experience as teacher, performer and vast knowledge of the German traditions from Joachim and Karl Klinger, it has been a joy to pass her inspirational teachings and sense of musical discovery to another generation of young violinists." 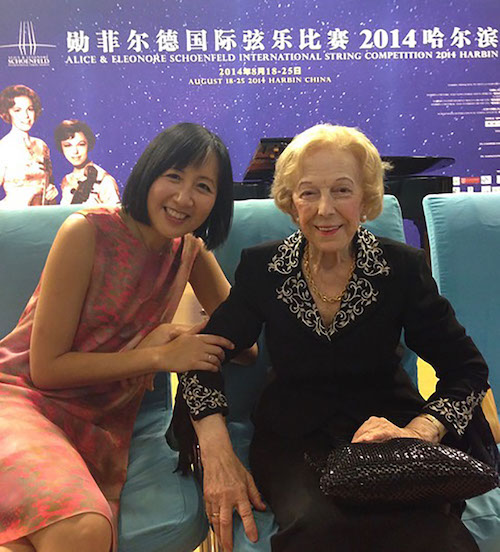 She also remembers Alice as always being the most refined person in any room. "Over the past 30 years, I cannot think of one time seeing her in pants or casual dress, even at festivals, parties or lessons at her home," Wang said. "Impeccably mannered and dressed, even in her 90’s she continued to fly overseas to China for the Schoenfeld International competition, with the strong desire and generous spirit of wanting to help our next generation of artists." Wang said she will always treasure Bach urtext mini score that Alice gave to her, in which she inscribed, "Bach (Ger) = brook. His name should be Ocean"

Los Angeles violinist Colleen Coomber studied at USC with Alice from 1984 to 1991, and she said "it was like starting all over again from the beginning." 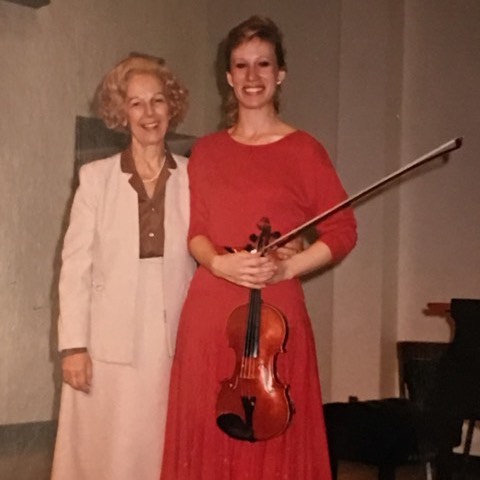 "She was very fastidious and very demanding, changing my technique, literally reset my bow hand and left hand vibrato during my time with her. Lessons were very intense, and often we spent an entire lesson on the first phrase of a piece." Coomber remembers one particular two-hour lesson with Alice at the sisters' home in La Canada. After playing for her and taking in Alice's advice, "I then heard Eleanor exclaim loudly from the other room, 'More vibrato!'"

"They were very nurturing to all their students, coming to every performance, even orchestra performances - and always having critiques afterward, making sure we sat up straight and played with the utmost artistry possible."

But "it was not just about technical ability, it was everything - style, phrasing, musicality - even how you dressed, and presented yourself on stage and off," Coomber said. "She was always guiding us to be top-notch in every way -- very strict and firmly old school."

May 29, 2019 at 07:13 PM · Laurie thank you very much for writing such a thoughtful and thorough essay on not one but two great mentors who certainly changed the world for the better not only musically but in every other way, too.