Stella Chen of the U.S. wins the 2019 Queen Elisabeth Competition

May 26, 2019, 12:32 AM · Congratulations to the winners in the 2019 Queen Elisabeth International Music Competition in Belgium! Click on their names to find bios and videos of their performances. 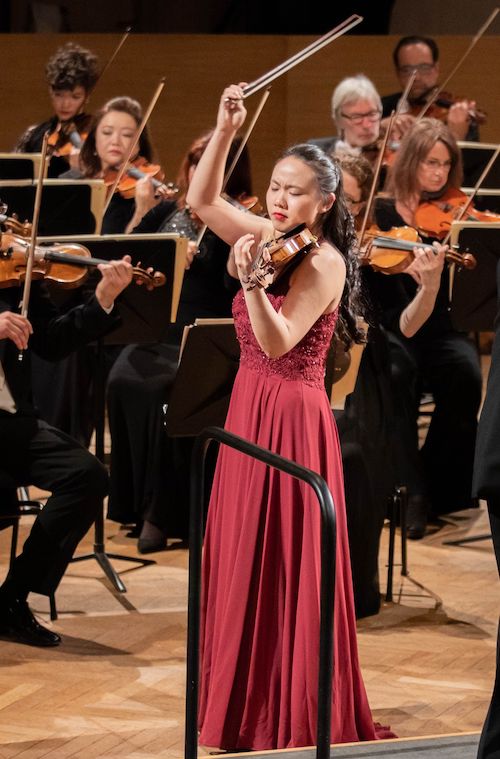 The six unranked laureates, listed here in alphabetical order, each will receive €4,000. Click on their names to find bios and videos of their performances.

Stella Chen studies at The Juilliard School with Li Lin and Catherine Cho and at the New England Conservatory with Donald Weilerstein. She previously studied with Itzhak Perlman and Miriam Fried. She also studied psychology at Harvard University. She has won prizes at the Yehudi Menuhin Competition and the Tibor Varga Competition and was awarded the Robert Levin Prize. As first-prize winner of the Queen Elisabeth Competition, Chen also will receive performance opportunities and the four-year use of the 1708 "Huggins" Stradivarius from the Nippon Music Foundation.

May 27, 2019 at 02:23 PM · Not taking anything away from the prize winners, but I have to wonder if the program requirements in the finals were such that perhaps some players were not necessarily able to showcase the very best of their abilities. I have followed this competition for many years and I felt that the overall standard of playing in these finals (but not the semi finals where I felt the standard was very high) was below that of years gone by. For the competitors to have to front up with a full orchestra and play a modern, large scale work of enormous musical and stupendous technical difficulty for half an hour, then after a very short break front up yet again for a major romantic concerto - well I have to wonder how much sheer mental and physical exhaustion played some part in the performances we witnessed. It is very different to perform at 100% in a real concert versus many hours in private in the practice room. The finals program did not reflect what the modern demands are upon a soloist playing an engagement with an orchestra - for the most part, a soloist is going to front up for one concerto and an encore lasting a few minutes. I thus felt that perhaps the requirements in the finals were not necessarily a realistic portrayal of the "real world" calibre of some of the artists, however I certainly agree that Stella Chen did play very well in the final and certainly deserved first prize.

My other comment is that I was extremely surprised and disappointed that the young Dutch player Hawijch Elders did not progress past the preliminaries. Personally I thought her playing was amongst the very best of all competitors and in my eyes I had her lining up for an overall top three finish. For some reason, however, the judges decided to eliminate her. To me, that was the most baffling outcome of the entire competition.

I would argue just the opposite — by having a more challenging set of requirements, they “string out the bunch” to use a bike-racing term. By asking them to go above and beyond the normal level of effort, we get a better view of which players had superior preparation. I’m not sure I agree that asking the competitors to play 75 minutes in the final is really beyond the pale. It may be more than they will typically do, but look at a soloist who chooses to conduct as well as play — they will have the entire program to contend with, with arguably more attention to detail required. And is it appreciably different than the finals in a string quartet competition which requests a full program?

My favorite didn’t win. I suppose I should go watch a few of the performances from those who placed better to see if I agree ??

May 29, 2019 at 07:39 AM · ...Listen, everyone was an outstanding player and very well deserves every bit of recognition coming their way. However, any competent violinist would've concluded that the obvious winner was Timothy Chooi. I'm honestly dumbfounded that he didn't win. I had never heard of him before so I can't seem to find any bias in me. He just had the sound of a world class soloist and a stand-alone technique from the rest of the competitors and even some of the current soloist in the circuit...

My fear is that he was looked down upon by the jury because he was beloved by the audience which in classical music is almost a crime. A sign of not being in the "service" of the music.

Timothy's career is not going to suffer, he'll be more than fine but honestly, it's just depressing to think that someone's hard work and stellar performance can be so easily dismissed by the pervasive pretentious prejudice of its own community. I can almost assure you that no one, NO ONE, in that jury exercised any critical thinking or autonomy in that final decision. They just thought "something must be wrong about this display the audience affection."

This desperate need to appeal to "tradition" for no reason other than the sake of tradition (because thinking for yourself would be ludicrous) will be the final nail on the coffin of classical music.

Get over yourselves. I tip my hat to you Timothy, keep up your outstanding work.

Do you mean to suggest that Lorenzo Gatto, 2nd place in this competition in 2009, is not a competent violinist? How about Pierre Amoyal? Do you think Jascha Heifetz and Gregor Piatigorsky would have recorded with him if he was not a competent violinist? Martin Beaver played 1st violin in the Tokyo String Quartet for 11 years. Might he be a competent violinist, based on that, or maybe his silver medal at this competition? Corina Belcea leads a fine eponymous string quartet. Patrice Fontanarosa took home 3rd prize in the Paganini Competition, and I defy anyone with ears to listen to his recording Le Violon de l'Opéra and say that he is not a superb violinist. Pamela Frank's Beethoven and Schubert cycles with her late father are absolutely top-drawer. Koichiro Harada founded the Tokyo String Quartet and played 1st violin for the first dozen years. Yossif Ivanov is another silver medalist in this competition, so I think it is fair to assume he is a competent violinist. And Dong-Suk Kang won the Merriweather Post and placed in the medals in too many competitions to count. If he's not competent, what does that say about all the players he outplayed?

Perhaps someone else needs to get over him or herself...

As the forum will no longer let me add new comments, I'll respond to the angry Toronto poster here. (Such a surprise, someone upset that their "hometown favorite" didn't win)

"However, I also know that musicians of their caliber, especially in classical music, have been spoon fed dogmas on how classical music should be from the very beginning of their formation." Yes, and Timothy has been spoon-fed those same dogmas.

"My point wasn't that they weren't able to identify the best violinist but more so that they decided NOT to. " Your evidence for this laughably ridiculous claim is nonexistent.

"You can dislike his interpretation but there is no denying that his command of the instrument (technique, sound, articulation, projection, phrasing, voice leading, bow control, you name it) was way above everyone else in the competition and even some soloists in the circuit as I previously said. " There's no denying it? Maybe you could point to some specific moments that we could watch to see this unrivalled playing...just so we know what it is and can compare with the inferior efforts of everyone else.

Must really frost your cornflakes that his brother didn't get tenure in the Met orchestra -- was that also because they didn't have any competent violinists listening?

Both of the Chooi brothers are fine violinists, there's no denying that. But any argument that someone else winning a competition in which they competed is proof that the judges are incompetent or conspiring against them is ridiculous, presented without a scintilla of proof.

That is all great, if only it was my point. It's actually the complete opposite so let me explain further, I guess...

I know the jury is well qualified and I know they're very "competent". However, I also know that musicians of their caliber, especially in classical music, have been spoon fed dogmas on how classical music should be from the very beginning of their formation.

My point wasn't that they weren't able to identify the best violinist but more so that they decided NOT to. Because if you pat yourself on the back enough, you could say that Timothy's performance was "self-serving" or "not what Tchaikovsky wanted" (feel free to pick your favorite cliche of the day).

You can dislike his interpretation but there is no denying that his command of the instrument (technique, sound, articulation, projection, phrasing, voice leading, bow control, you name it) was way above everyone else in the competition and even some soloists in the circuit as I previously said. Which is why I also said any "competent" violinist would recognize this because if you (not you, in general) have any idea of how sound is produced on a violin, you would recognize this immediately as well.

Furthermore, competitions are not (or shouldn't be) about your self-serving attitudes towards your music preferences. It's literally about finding who is more capable and apt to fulfill a busy touring schedule and be able to deliver exceptional performances of very difficult works. That's not my personal opinion, that's LITERALLY the prize of the competition.

Competitions are inherently "unartistic" because as Bartok said, "competitions are for horses not artists". He's right, but if you're going to do it anyway, then give it to the more deserving player. If they want to strip people off their hard work and just give it to whoever is playing in the sanctified "service" of the music, maybe they should just form a committee to scout for such "service" and just give them money instead.