May 23, 2019, 2:41 PM · Welcome to "For the Record," Violinist.com's weekly roundup of new releases of recordings by violinists, violists, cellists and other classical musicians. We hope it helps you keep track of your favorite artists, as well as find some new ones to add to your listening! 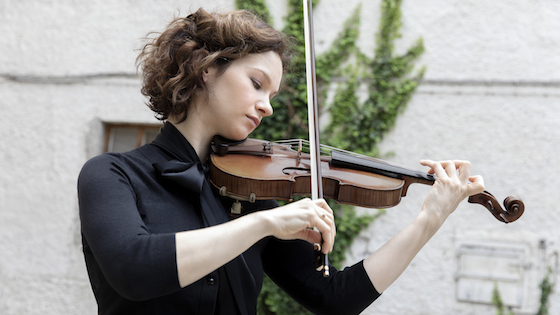 The way Antón García Abril put together the Six Partitas he wrote for solo violin makes his inspiration clear: he wrote six single-movement pieces and named them "Heart; Immensity; Love; Art; Reflexive; You" -- "H-I-L-A-R-Y." This is Hilary Hahn's world premiere recording of the partitas, commissioned by Hahn for solo violin. These works continue the longstanding tradition of composers such as J.S. Bach and Eugene Ysaÿe writing six polyphonic works for the violin. Read our interview with Hilary about these works here.. "Before these pieces existed,” said Hahn, “I knew they needed to be written. Antón García Abril deeply understands the violin, and he epitomizes a musical tradition that has never before been expressed in the solo violin repertoire. His voice is romantic and impulsive, abrasive, beautiful." BELOW: Hahn talks about the new album, which is available in digital formats as well as vinyl.

May 25, 2019 at 02:01 PM · Wow ! Bet everyone wants to hear it again, study the score, find relationships in the melodies.....analyze the texture.....When the composer's explanation exceeds the length of the work, perhaps it is not a masterpiece worthy of entrance into the Hall of Fame with Schubert, Schumann, Brahms, Dvorak or Elgar...or others that've written for piano quintet. The piece, like so many recent works, seems difficult and busy beyond musical consideration....Anyone wanna hear it again ?? Want a recording ?? A perhaps noble attempt that clearly misses the mark.

May 25, 2019 at 05:24 PM · I knew two of the members of the Jupiter, Megan and Liz Freivogel, when they were kids. Their brother John was a good friend of my son's. It's an amazing family. The parents are basically non-musical. Their four kids are very talented. John played violin back then, and I believe he plays professionally, just like his sisters. Their brother Ben was a cellist. I do not think he plays professionally now, but he probably could have become a professional cellist. As kids, they were the Freivogel Quartet and played at venues like the Kennedy Center.