May 21, 2019, 10:24 PM · When Hilary Hahn first encountered the solo violin writing of Spanish composer Antón García Abril, she thought that a composer who writes so intuitively for solo violin should create a set of works like J.S. Bach's Six Sonatas and Partitas, or Eugène Ysaÿe's Six Sonatas.

Her vision now has led to Antón García Abril’s 6 Partitas, which Hilary released last week. She co-commissioned the partitas with the National Endowment for the Arts and Washington Performing Arts, with additional funding from Dr. Gary Mather and Ms. Christina Co Mather, premiering the works in live performances three years ago. An edition of the sheet music is in the works.

Hilary first learned of García Abril through both his music and a mutual friend. "So I kind of knew him on two levels: as a composer and as the best friend of this person who I know who lives in Spain," she said. García Abril, now 86, is an award-winning composer who has written opera, orchestral works, cantatas, film music and song cycles. He also taught for nearly 30 years as Professor of Composition at the Real Conservatorio Superior de Música de Madrid.

The idea for the partitas started when García Abril wrote Hilary three pieces, which he called "Three Sighs," for her 2013 Grammy-winning project, In 27 Pieces: the Hilary Hahn Encores. Hilary had commissioned García Abril to write just one piece for violin and piano, with the option of submitting a version for solo violin. But as he told her, "I just wanted to write you three." She chose the Third Sigh for the project, but it was the "Second Sigh," written for solo violin, that made her think outside the scope of the encores project.

"When I first played it, I realized the genius in his voice-leading and solo style," Hilary said, speaking to me over the phone last week. "I also realized that there was nothing like it in the solo repertoire. Not a lot of composers have done polyphony well for solo violin."

The composers who have, such as Bach and Ysaÿe, have explored the genre through a set of six works.

"Because of the tradition of the solo sets, I felt like I needed to ask him to write a set of six sonatas or partitas," she said. "I didn't have any format in mind, I just wanted him to think about it." Of course, this was no easy request to fulfill. Without accompaniment, the violin must harmonize itself, which challenges the limits of a four-stringed, bowed instrument. And Bach's solo violin works are worshiped as a kind of "Bible" to the violinist; Ysaye's are also well-loved and well-revered.

Hilary persisted in asking García Abril to do it, and he persisted in brushing off the idea -- at least that's how it appeared.

"He would say, 'Oh I don't know. What would I write? What would I say?'" Hilary said. She became convinced that he was not going to do it.

Then one day in 2014 he surprised her with the entire score of all six Partitas. 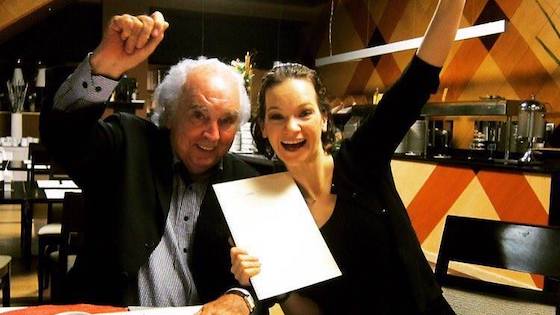 "Secretly he had been working on it every single day, for months," she said. "He had been listening to recordings to get to know my playing better; studying the scores of Bach, Ysaÿe, and every other solo violin piece he could find; and really trying to figure out his own language," she said. In fact, his wife Aurea, told Hilary that every day for months, he would announce, "I am going to my studio to be with Hilary," and spend all day studying and writing, emerging only for meals and a daily siesta.

"In each of the Partitas, I don’t use dances [as Bach did]," García Abril said, "but I do use the rhythms from our Spanish folklore. I’m one who still thinks music is global, it always has to reflect the background of each composer...The concept of the writing is that there is a cultural essence, which has a lot of weight in Bach and my own Partitas."

After García Abril presented her the score, she worked on the music and then met with him a few weeks later. With their mutual friend as Spanish/English translator, "we went through it detail by detail," Hilary told me. Their friend was exhausted by the end of the day, "after going back and forth between two artists with opinions, trying to explain bilingually to each of us, where we were coming from," Hilary said. Over those sessions, "we really got to know each other's values and priorities and how we thought about the music. You don't get that opportunity with a lot of composers."

"Every note somehow feels dedicated to me," Hilary wrote in her blog. "The phrasings that I’ve never encountered before, that he imagined me playing, feel like they were meant for me to interpret. When I play them, I feel like they are significant. They’re beautiful, expressive, mercurial, colorful, abstract, detailed, dancing, impetuous and full of motion and emotion."

She made sure it was a good surprise.

"I was over at his son's house (in the States) visiting the family, and I told the son (also Antón) that I had brought some background music for the party that his father would enjoy," Hilary said. "I gave him the thumb drive and said, 'Don't look at the tracks, just press play!'" Knowing that the music was about to play, Hilary continued talking casually with the composer, until at one point he stopped talking and raised his index finger. "Is this...what is this? Is this a performance? Is this the Partitas?" he asked. At that point she told him, "Yes, I recorded it!" and filled him in on the details. "He was really happy, and it was fun to be able to return the favor."

While these works involve greatly detailed writing for violin, García Abril himself is not a violinist; he is a pianist. "That's something that boggled my mind a little bit," Hilary said. Not only did he understand how create polyphony within four strings, but he also has a quality that goes beyond writing for violin technique. "Having the expansiveness to understand how to do something on such a small scale, but so intricately - I think that's kind of amazing," she said.

For the player, the partitas are technically as well as musically challenging. "To really find the music in them, you need to spend some time with them, and you also have to understand the Spanish rhythms, as well as his own personal sense of rhythm and freedom," Hilary said. "That was really a revelation to me." Sometimes García Abril wanted the opposite of what might be conventional. For example, "when he writes 'rubato,' he means to start fast and then broaden. When he writes 'free' he means to broaden. When he sings and demonstrates it, when he speaks about the music, if you are privy to that information I think you can see it reflected in everything that he does."

For that reason, Hilary is releasing a number of YouTube videos in conjunction with the new recording, including interviews with García Abril and mini-masterclasses about each piece. "You can see in the interview video that he speaks in grand terms," Hilary said. "He is a senior artist in his country who is revered as an authority on a lot of things. In Spain he is one of the great living composers and very well known." BELOW: García Abril and Hilary talk about Partita No. 2 "Immensity."

Here is Hilary's masterclass on the same piece:

"I just love these pieces," Hilary said. "All together, they create a new sound world for solo violin, with new expressive opportunities, without being a sound world that you can't feel your own feelings in. I feel like when something is in a new sound world you need a little time to get used to it, but with this music, once you listen to a couple of them, you are in it, and then you just continue."

May 22, 2019 at 01:16 PM · Wonderful article! You've given us so much to dig into to with your analysis and the various videos. Thank you! And Abril is an inspiration!

May 22, 2019 at 01:23 PM · I have always enjoyed Hilary's thoughtful responses. This would be a good article to bookmark and go through while digesting the 6 Abril Partitas!

May 23, 2019 at 04:29 PM · Here is what Hilary said about publishing the score: "We're actually currently working on it. I learned so much from doing the Encores. So I'm applying all that I learned from that to this. Since it's just one composer and one edition, it's actually much easier."

May 25, 2019 at 05:16 AM · Excellent. Thank you! I recently obtained 'In 27 Pieces' and although I've only worked through one piece, the edition's quality is high. I look forward to the score's release.