Jacobs School to Sell 5 Fine Violins, Including Guadagnini Once Loaned to Joshua Bell

May 8, 2019, 12:03 AM · The Indiana University Jacobs School of Music is selling five fine violins, including the 1750 Giovanni Battista Guadagnini violin that was loaned to Joshua Bell early in his career. 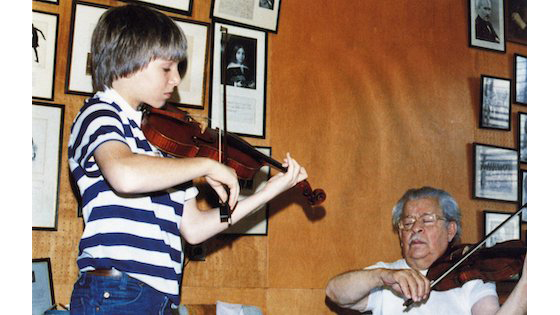 "I officially started my career in 1982 at the age of 14, while continuing my studies at Indiana University under the great Josef Gingold," Bell said. "I was unable to afford a great violin at that time, but thankfully Indiana University was in possession of this wonderful Guadagnini violin, and kindly lent it to me during this crucial period in my musical life, until I was finally able to purchase an instrument of my own. I played dozens of concerts on this fine violin and have fond memories of its glorious tone."

The violins will be sold at auction on May 16 in New York, through Tarisio Fine Instruments and Bows. The other violins being sold by the Jacobs School include a c. 1680 Francesco Rugeri; a c. 1770 Gennaro Gagliano; a 1810 François Louis Pique; and a c. 1900 Annibale Fagnola.

When it comes to the Guadagnini, Bell was just one violinist who used the violin, which was given to IU in 1963 by an anonymous donor and was loaned to deserving students.

Proceeds from the sales will benefit the Jacobs School of Music’s students and faculty -- though it looks like my alma mater will be short five fine violins!

Having the chance to play on a fine violin is a rare and valuable opportunity. When an institution has an asset such as a fine Guadagnini violin, that institution is in a position to help its students become acquainted with the unique capabilities of such an instrument. The institution can even help launch a career, as Indiana did in loaning the violin to Joshua Bell.

Let's hope the new owners put the these fiddles to good use.

BELOW: The very young Joshua Bell plays the last movement of the Tchaikovsky Violin Concerto on the Guadagnini violin loaned to him at the time by Indiana University. From a 1982 master class with Josef Gingold.

I hope they benefit the students rather than the faculty!

Lesson: if you gift an instrument to an institution, make it a condition that it can’t be sold.

Without premium faculty* (who must be recruited and retained), that conservatory would have no reputation whatsoever. And no students. What we see in universities everywhere is that when it comes to students vs faculty, what's good for the goose is good for the gander. Universities do not exist only for students. They also exist as institutions where faculty members can pursue research, scholarship, and creative output in many forms. The two missions (student learning and faculty scholarship) are parallel and (allowing for the occasional exception) harmonious objectives. Not all university violin professors also have performing careers, but isn't that the ideal?

Whenever an institution sells art collections or other antiquities, there is uproar. But when institutions spend money on art (or violins), there is often also outrage because this money is not being "spent on students." The institution then defends itself by claiming that the purchases are "investments." But how can they be investments if the items are never sold? These are very complex decisions. The institution might feel, for example, that the Ex-Loaned-to-Bell Guadagnini is a liability because it's too valuable to loan, to maintain, or even to store, and that they're better off right now with a little more cash to spend. It's quite possible that whoever donated the Guadagnini to the institution had in mind that the instrument might be sold at an opportune time, and they might have left that decision to the institution. Gifts that come with strings attached (sorry!) or restrictive provisions are not as useful. Philanthropists understand this very well.

*Premium faculty: Gingold and others of like kind and quality.

May 8, 2019 at 04:01 PM · Paul, I wouldn't disagree that universities should treat their faculty well and use their resources to do so. But I think the point in the above comment is that the instruments were donated for the use of students, who benefited for many years from being able to play them. So if those instruments are sold, then that $ should likewise benefit the students, as the long-ago donor intended when entrusting the institution with his or her rare and valuable instrument.

May 8, 2019 at 04:23 PM · If they are selling the instruments to cover other costs (let us acknowledge for a moment that "Proceeds from the sales will benefit the Jacobs School of Music’s students and faculty" is an extremely vague statement. The money benefits the students and faculty how??), this shows a failure of the upper administration and development offices in fundraising, soliciting donations and maintaining budgets. It also implies that the students and faculty would benefit more from money than access to fine instruments. And if this is to cover a lack somewhere else, it is very likely that they will be in the same financial issue again down the road and have no instruments to flip.

May 8, 2019 at 08:47 PM · Laurie, I see where you are coming from, but first of all, unless you actually know that the instruments were donated for use by students, you should not assume that. Since you studied at IU then maybe you have more insight into that than meets the eye. (Your report here only says that the the Guadagnini violin was loaned to deserving students, not that the donor restricted its use thereto.) Second, I would argue that having a great professor is just as "beneficial" to an aspiring young violinist as having a great antique violin to play, if not more so. Hiring and retention are both expensive.

If it's that important that students have Guadagnini violins to play, why don't they buy a few more? The Indiana University Foundation (IUF), with its $2.3 billion in assets, could do that without blinking. The Virginia Tech Foundation likewise owns a Carlo Bergonzi violin that they purchased for use by a specific professor (and, obviously, as a long-term investment). They didn't have to hold a bake sale, and the instrument is NOT loaned to students. Both foundations are entirely private entities.

What I see in this thread is a lot of armchair quarterbacking that seems to be based mostly on emotion rather than fact. Just because an institution is selling a few antiques doesn't mean their development process has failed. Maybe they have a sufficiency of other fine instruments in inventory. Maybe they're lining up to buy something even better but can't disclose that yet. Maybe a lot of things! I'm just saying stuff like this happens all the time for all kinds of reasons, among which being that it might simply be a reasonable business decision at the moment.

May 9, 2019 at 02:05 AM · They already closed the only violin shop on the 4th floor of MA building and didn't hire anyone, is it their development process too?

May 9, 2019 at 11:51 AM · A quick Google search shows there are multiple violin shops with experienced and qualified luthiers in Blooomington. Maybe the university felt its funding would be spent in better ways than duplicating a service that seems abundantly available in the local private sector. I'll bet the private luthiers also weren't too glad to have competition from a heavily state-subsidized shop. Having a violin shop on campus is the kind of thing that looks bad when you have a significant percentage of undergraduate service teaching (math, english composition, general chemistry, etc.) being done by adjuncts who aren't earning a living wage. I don't know the extent to which IU relies on "temporary" adjuncts, but it's definitely a significant national higher-education trend.

All state universities have the problem that their legislatures have slashed higher-ed budgets over the past 20 years. There's belt-tightening across the board. My department closed one of its shops recently too, and another one went half-time. The one that went half-time is a service that is not available locally at all and is vital to the business of the department.

May 9, 2019 at 02:35 PM · I have absolutely no insight as to why the Jacobs School is selling these violins at this time, but I doubt very much that it is due to a financial emergency. The Jacobs School has an impressive endowment and is generous with scholarships.

May 10, 2019 at 10:43 PM · I think we all get (rightfully) emotional about things that go from public to private use, whether that be public land handed over to developers or violins sold to raise funds from some other project.

I strongly suspect the lack of transparency about the use of these funds indicates long-term endowments sold for short-term financial gain. Over the last couple of decades this has become the norm in almost any field of endeavour.

In a world where military spending and border control trump (all puns intended) virtually any other priority, health, education and the arts are increasingly left to fend for themselves.

I realise I'm being political here but it's surely this politic that's motivating our strong emotions on this topic.

I live in Australia where the situation is far worse because philanthropy is not an established culture. People think I'm mad because I spend a large chunk off my non-existent savings buying beginner instruments for families who can't afford them - which is important because instruments as well as quality lessons make classical music elite and out of apparent reach for so many people. I love the idea that someone did this for advanced students - it's not something that would happen here.

So unless this is going to endow a (means tested) scholarship or some other long term benefit, I think our emotion is well warranted.

However, taking it out on faculties that are increasingly asked to be businesses rather than educational facilities doesn't fix anything. If we want things to change, we need to change the consumerist culture that under-values investment in the arts and in potential performers.

May 11, 2019 at 04:46 PM · If the violins were owned by Indiana University, then you could issue a freedom-of-information (FOIA) request to see all internal communication (email, memos, meeting notes, etc.) regarding them. You could be asked to pay a fee for the cost of gathering that information, but you could get it anyway. If the violins were owned by the Indiana University Foundation, then that's a private entity and they don't have to tell you a thing. There might still be internal university communications about the sale that you could extract by FOIA. Transparency is available ... for ready money.