"I listen to Bach, much more than I play Bach. I listen to Bach all of the time," said Capuçon, speaking to me over the phone last month. "It gives me a mix of energy, wisdom, strength." 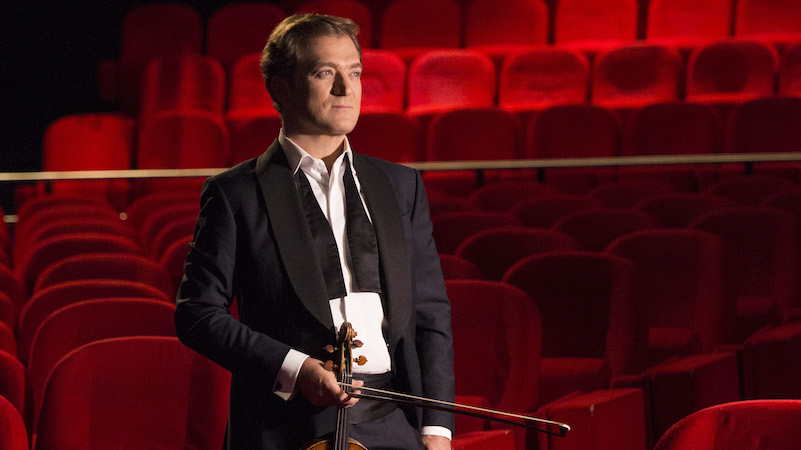 Today Capuçon releases an album of Bach Sonatas for violin and keyboard, recorded with pianist David Fray. Capuçon has been plenty busy of late -- when I spoke to him he was about to play a recital the Library of Congress in Washington D.C. (using the ex-Kreisler Guarneri del Gesù), followed days later by a performance with the New York Philharmonic (his first on a subscription concert) of Matthias Pintscher’s violin concerto "mar’eh." Right now he is in the midst of the two-week Festival de Pâques that he founded with Dominique Bluzet, which includes concerts in Aix en Provence. And it's been less than a year since the release of his album of film music, Cinema.

Earlier this week, following the burning of Paris's Notre Dame cathedral, Capuçon announced a tour of seven cathedrals to raise money for its reconstruction. (His brother, the cellist Gautier Capuçon, simply took out his cello and played in front of the burning cathedral.)

Yet with so much activity, accomplishment and acclaim, Capuçon remains humble in the face of Bach. His recording with Fray grew from a kinship for the great composer and mutual musical understanding.

"We played together the first time four years ago, and we've played Bach together often," Capuçon said. "We decided to record it because it was very organic; we share the same view of these pieces."

"It's always very intimidating to record Bach, and if I listened to myself I would never record Bach!" Capuçon said. "It's like being in front of the Himalaya and feeling so small. But at the end, I do it. I did a concerto, a sonata. It's also a way to go to the Sonatas and Partitas, I mean finally go there."

Wait, is he going to record the Sonatas and Partitas?

"Every year I'm pushing it away and saying next year, next year," Capuçon said. "But I will do it soon. Not because I have the pretension to think that anybody is waiting for me to do so, but I know that if I don't do it, I will regret it somehow, and I don't want to do it too late. So for me, playing these piano-violin sonatas is a journey which began with the concerti," he said. "Also I've played lots of Goldberg Variations, for string trio; I love this piece."

Capuçon said it's a little hard to talk about the recording, which they did a year ago December, because "if I were to do it again now, which is just a year later, I would already do it completely differently! That's why I keep waiting to record the Sonatas and Partitas, because I know I won't be happy, straightaway after," Capuçon. said, laughing. He feels a real affinity for his friend violinist Christian Tetzlaff, who recorded the Bach Sonatas and Partitas already three times -- "I completely understand! I do the same, but I don't record them! (He laughs) I'm just saying, when you cherish a composer so much, when you respect him so much and when you have such a high consideration, perhaps you think too much."

When it comes to his recent recording of Bach Sonatas with Fray, is a picture of a moment. "I would say it's a version of two friends playing Bach and believing they have something to say at this moment, and sharing it for the public."

And on the other end, his current favorite-Bach listening list includes both modern- and period-style performances.

"I recently listened to a live performance of the B minor Mass with John Eliot Gardiner, and this was for me one of the most amazing performances ever, of any piece of Bach," he said. "It was on period instruments, but to be honest I didn't noticed it was. It was pure music, and this is what I like with performances of Bach, or Mozart. Same thing when I listen to András Schiff playing any Bach. It's on piano, but it's the same: it's an artist at the service of a composer, and I don't feel any ego."

"When I listen to Milstein playing Bach, when I listen to Grumiaux playing Bach, when I listen to Isabelle Faust playing today -- they play completely differently," he said. "I have a lot of admiration for different styles, and I would not say this is right, and this is wrong. If I am moved, if there is talent and there is emotion, and if it represents serious work and reflection -- the most important thing. You have to feel honest with yourself when you perform it. Then people if like it, that's wonderful, and if people don't like it, well, that's okay. They can go to something else."

When I spoke to Capuçon, he was about to try the 1730 "ex-Kreisler" Guarneri del Gesù, which he was to play in a Library of Congress recital.

"I myself play the wonderful 'Panette' del Gesu of Isaac Stern, which is a 1737 instrument, and so I'm lucky enough to have it every day," he said. "But I'm very excited to be able to try the 'Kreisler' del Gesù, not to compare, but just to play them both in the same concert, it is an amazing luxury. I feel like a little boy who is about to meet somebody amazing!"

Talking with Capuçon about instruments is fascinating, because he has experienced some of the finest violins in the world and has both the expertise and eloquence to speak knowledgeably about them.

"I played a Strad for five years, a 1721 Strad which was property of Fritz Kreisler, and it was wonderful, it was warm," Capuçon said. "I always have liked a violin which has the tendency to sound like viola, a bit dark. I always looked for this kind of sound. I was never attracted to violins that were very loud, just to be loud, or very high-register strong. I always look for the rawness of the sound. After the Strad, when I (had the funding) to look for a del Gesu; I knew I would go for a lower sound, this was my dream. I can be very impressed with a Strad, there are some amazing Strads -- the Soil is the one that Menuhin played and Perlman plays, and it's just incredible, it almost sounds like a del Gesu. But in general, most of the Strads all sound to me a bit too clear. A wonderful clarity, of course. One Strad that I played on was the Le Chant du Cygne, which is owned by a friend of mine. This is really wonderful, it was the last Strad, which was made in exactly the same year as my del Gesù, 1737, so it is quite interesting, and this is really warm."

"But to be very honest, I'm very happy with this del Gesù I play - the 'Panette.' This violin fits me -- I knew the first second I tried it in 2005," he said. "I played the beginning of the first Brahms Sonata, and after five notes I had so many goosebumps everywhere -- I knew it would work! (He laughs) Now it is 14 years later, and every time I play on it it's like the first date, it's like when I met my wife!"

I was also curious about what inspired Renaud to record the Cinema album that he released last October, which includes music from Cinema Paradiso, Schindler's List, The Adventures of Robin Hood, Breakfast at Tiffany's, The Godfather, and The Twilight Saga: New Moon, representing composers such as Andrea and Ennio Morricone, John Williams, Erich Wolfgang Korngold, Vladimir Cosma, and Alexandre Desplat.

He knew then that he wanted to record a cinema music album one day, but at the time, without a CD company, it was just a dream. "Then about 10 years ago, I really began to think about it seriously." Eventually he met with conductor Stéphane Denève, and this project started looking like reality. "Finally it happened, and it was such a lovely time."

Though performing film music is different from recording an album of Brahms or Bartok, "I treat it with the same seriousness," Capuçon said. He also enjoyed that "a lot of the people who bought the CD are not the people who bought my other CDs. So it's a kind of different public. And I feel good because I did it in the right way. It was never a promotional idea, it was never something that was pushed by my CD company; it was my own idea."

Did he use any of the same music that was on the Perlman CD?

"Oh yes, there was of course Schindler's List and also Out of Africa, and Yentl from Legrand," he said. But he also emphasized the music of French composers, like "Le Mépris" of Georges Delerue; and music by Alexandre Desplat and Philippe Rombi. "But you have to listen to Perlman's CD, the sound is just to die for."

Capuçon said he greatly enjoyed creating the transcriptions with composers Cyrille Lehn and Daniel Cappelletti. "We decided which pieces, and they transcribed them," he said. "We worked together, and we'll do the same for Volume 2, because I'm already thinking of the next one!"

April 21, 2019 at 10:00 AM · Great interview! (How wonderful that he compares playing the del Gesù to meeting his wife. Wow! Loved that!) And the Bach snippet you posted is simply beautiful. Thanks for the link to purchase the album!