April 4, 2019, 4:10 PM · Welcome to "For the Record," Violinist.com's weekly roundup of new releases of recordings by violinists, violists, cellists and other classical musicians. We hope it helps you keep track of your favorite artists, as well as find some new ones to add to your listening! 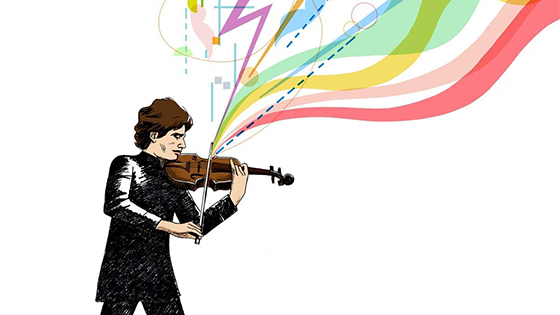 Violinist Augustin Hadelich performed Ligeti's Violin Concerto with numerous U.S. orchestras in 2018, including the Boston Symphony Orchestra conducted by Thomas Adès, who contributed a new cadenza for the Ligeti which is also featured on this new Warner release (Hadelich's first as a Warner Classics artist). For the Brahms concerto, Hadelich plays his own. "Writing a cadenza is a chance for a more personal reflection, and after many years of performing the Joachim and Kreisler cadenzas, I decided to write my own," Hadelich said. "It was an immensely interesting and humbling experience for me to compose this cadenza while attempting to stay within the parameters of Brahms' style." BELOW: Augustin Hadelich performs his own Brahms cadenza live:

On their new album "Revolution," three brothers - pianist František Janoska, violinist Roman Janoska and violinist Ondrej Janoska join bassist Julius Darvas (their brother in-law) in arrangements of works by classical composers like Mozart, Kreisler, Wieniawski and Bach, as well as three new compositions by the Janoskas themselves. The album also includes several arrangements of top hits by the Beatles in the Janoska style, wich as "Penny Lane" and "Let It Be." To coincide with the release, the Janoska Ensemble will embark on a 10-city U.S. tour, performing a program based on the "Revolution" CD. Their stops include Texas, New York, Virginia, Arkansas, Tennessee, Indiana and Wisconsin. BELOW: Janoska Ensemble performs "Melodie For Melody," written by Roman Janoska for his daughter Melody on the occasion of her birth.

Mikhail Pochekin was born in 1990 to a family of musicians: his father is a well-known violin maker, and his mother teaches violin. He began studying the violin at the age of five with Galina Turchaninova and continued his studies with Ana Chumachenco, Viktor Tretiakov and Rainer Schmidt, at the music academies of Cologne, Munich and Basel, the "Reina Sofia" school of music in Madrid, as well as the Mozarteum University in Salzburg. His 2018 album, The Unity of Opposites, featured him with his brother, violinist and violist Ivan Pochekin, playing duets by Mozart, Michael Haydn, Reinhold Gliere, and Sergei Prokofiev. BELOW: Mikhail Pochekin performs excerpts from his new solo Bach album:

April 4, 2019 at 09:25 PM · I just heard Augustin Hadelich play the Barber with the Colorado Symphony on Sunday and he was great as ever. He got slightly covered for a few non-essential bits, so I wondered if that was an orchestration mistake on Barber's part, or if that was a balance issue or the fault of the bad acoustics in the concert hall (which has terrible acoustics). He was great in the Brahms concerto a few years ago.

April 5, 2019 at 12:17 PM · I don't know where that drawing of Hadelich comes from, but I have to say that I love it! Seems to be such a perfect expression of his playing: pure light going through a violin into an array of colours! Awesome! Cheers!