March 14, 2019, 3:43 PM · I was a little worried when I saw the extensive program notes for Tafelmusik Baroque Orchestra's concert Sunday night at Disney Hall, called "Tales of Two Cities: The Leipzig-Damascus Coffee House."

It sounded complicated: "The cities of Leipzig and Damascus both lay at the crossroads of ancient trading routes. They were both important centers of scholarship and the dissemination of ideas..." Did I need to study? Would there be a test afterwards? Would I have to place these cities on a map, or maybe write an essay on their economic or historical importance?

Then the lights dimmed and I realized that I didn't need to worry -- just listen, watch and enjoy. They were going to invite me into "the coffeehouse" and bring me along for the ride. And what a unique and enjoyable one! 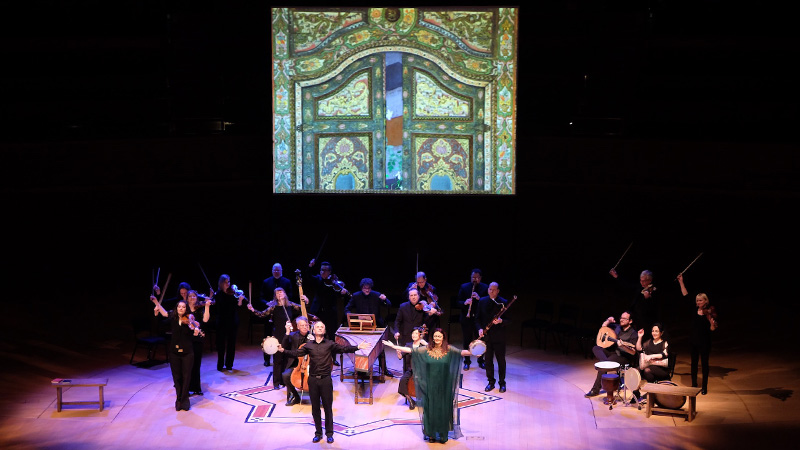 If you are unfamiliar with the group, members of the Toronto-based Tafelmusik play on Baroque-era instruments -- no chinrests and shoulder rests, with Baroque bows. Founded in 1979, Tafelmusik recently named violinist Elisa Citterio as its new director, replacing longtime director Jeanne Lamon, who retired.

Standing for most of the performance and playing entirely by memory, the 16 members of Tafelmusik were joined by the stunning Trio Arabica (with members from the Al Qahwa Ensemble); friendly narrator Alon Nashman; and a screen overhead that helped guide the audience through the various stories of the night. The show was written by the group's double bass player, Alison Mackay.

The show began with violinists filing into the audience, playing as they faced other performers on stage, one holding aloft a large percussion instruments that, based on its appearance, I immediately deemed a "moon drum" -- it's actually a large Arabic tambourine called a "daf".

The music, mostly from the 18th century, alternated between European Baroque music and traditional Arabic music. The action centered around the kinds of music, coffee, literature and art that one would find in the coffee houses of the time in Damascus, Syria and Leipzig, Germany, both cities where so many cultures have come together.

As the music weaved in an out, so did the players, walking around the stage as they played and emerging in front when their playing was featured.

Four Tafelmusik violinists created a gorgeous blending of sound during their performance of the Largo from Telemann's Concerto for Four Violins in G major. They switched violinists to play the next movement, the Vivace, which had a wonderful spirit of joy and communication. This seemed a common practice for this ensemble: to share the featured and supporting roles equally among members of the group.

The viola stole the show for at least a little while, as the orchestra gathered in a semi-circle around violist Patrick Jordan, who performed the Presto from Telemann's well-loved Concerto for Viola in G major, taking it at a breathless-fast pace and eliciting a spontaneous burst of applause from the audience.

Visually speaking, the slide show included a series of pretty porcelain coffee cups, decorated on the inside for the weak, see-through coffee of Leipzig and decorated on the outside for the strong, opaque coffee of Damascus! They also guided us along with maps to locate these cities, paintings of musicians and dancers, literary figures and more.

New director Citterio was featured in a performance of the Allegro from Torelli's Concerto for Violin in E minor, Op. 8, No. 9. She was helping to illustrate the story of Pisendel, a shabbily-dressed young violinist who nonetheless won over the musicians of Leipzig by playing a piece written by his teacher, Torelli - a virtuosic cascade of notes. Citterio played it with energy and precision.

An amusing side-story featured excerpts from Telemann's "Burlesque de Don Quixote," as Cervantes' classic would be the type of literature to be read aloud in one of these coffee houses. As members of Tafelmusik played music depicting the gallop of Rosinante and other characters, our narrator showed full commitment with a dramatic flip onto the floor, as he described the delusional Quixote, fighting the windmills that he took to be monsters and being flipped by the sail of a windmill.

Members of Trio Arabica showed their virtuosity throughout, but especially in a series of solos and duets that featured them in the second half of the show. Demetri Petsalakis displayed the range of the oud, a plucked string instrument. Vocalist Maryem Tollar sang a florid and melismatic solo; and then Naghmeh Farahmand did a mesmerizing improvisation on that "moon drum," the seemingly simple daf, which is both struck and shaken to produce an astonishing range of effects. All were met with enthusiastic applause.

The show ended with Bach, more traditional Arabic music, and then Telemann. The show closed with some thoughts on war, displacement and shared culture, noting that in the present day, many Syrians displaced by war are making their homes in Germany, hoping to return one day when their homeland is at peace.

BELOW: An excerpt from Tales of Two Cities: The Leipzig-Damascus Coffee House

March 14, 2019 at 10:43 PM · I saw this last week in Denver. I wasn't looking forward to it due to it being Baroque, and seemingly HIP, but despite limited vibrato, the musicians played with a nice sound and sensible tempos, not beating up their instruments like some other baroque ensembles I've seen. The Arabic music and improvisations of the small ensemble was beautiful and it was woven together very well into a tight program.

I thought the movement of the Telemann viola concerto would have benefited a bit from some more vibrato so that it could have stood out a little farther from the texture of the rest of the ensemble, but that's a small qualm.

March 15, 2019 at 11:57 AM · Laurie: I enjoyed your description of how this came together. What it sounded like shows a very clever and dramatic history lesson through music, literature, and art. I could smell the coffee!

March 15, 2019 at 04:08 PM · In 2017 we saw Tafelmusik perform their "J.S. Bach: The Circle of Creation" show. I admit that I was not excited going in, because usually I find these multimedia presentations to be cheesy and to dumb down the music, but it was pretty good. The playing was excellent (no matter how you feel about HIP), and the information about the artisans and craftsmen who made Bach's work possible was all fascinating.

March 19, 2019 at 08:46 PM · A few years ago we saw Tafelmusik perform "The Galileo Project". It was a wonderful experience. Sounds like they're still cranking out the goodies. I'd recommend their performances to anyone who likes baroque music (or who wants to give it a try). If you can't get to a performance, try to find a DVD - it's the next best thing.

Our string quartet has had a go at Telemann's Don Quixote - Rosinante's gallop is hilarious.